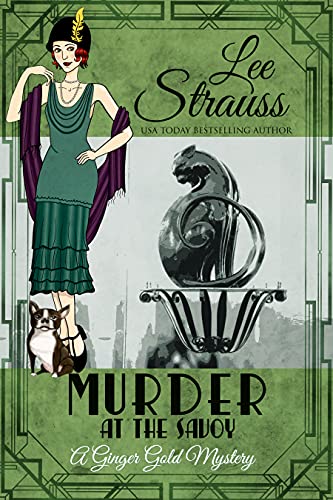 Murder at the Savoy: a 1920s cozy historical mystery

Mrs. Ginger Reed, known also as Lady Gold, settles into homelife with her husband Chief Inspector Basil Reed, son Scout and newborn daughter Rosa, but when an opportunity to join a dinner party at the renown Savoy Hotel if offered, she's eager to engage in a carefree night with friends. Some of the guests are troubled when their party's number lands at unlucky thirteen, as death is sure to come to the first person who leaves the table.

Thankfully, the Savoy has an answer to this superstitious dilemma. A small statue of a black cat fondly known as Kaspar is given the empty seat, rounding the number to fourteen.

Unfortunately, in this instance Kaspar didn't fulfil his duties and a murder is committed. The case is tricky and complicated by a recent escape of a prisoner who has a bone to pick with Basil. Are the two seemingly unrelated incidents connected?

Ginger and Basil work together to solve one while avoiding the other, and what can they do about the black cat who crossed their path?