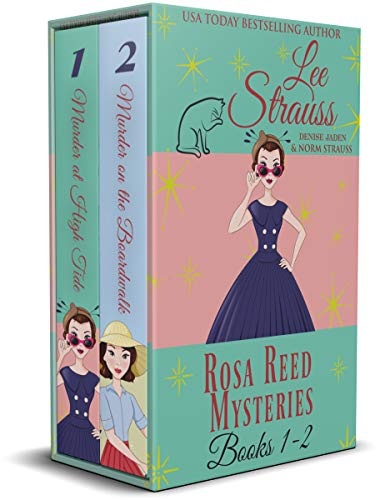 If you love early rock & roll, poodle skirts, clever who-dun-its, a charming cat and an even more charming detective, you're going to love this new series.

It's 1956 and WPC (Woman Police Constable) Rosa Reed has left her groom at the altar in London. Time spent with her American cousins in Santa Bonita, California is exactly what she needs to get back on her feet, though the last thing she expected was to get entangled in another murder case!

MURDER ON THE BOARDWALK

Murder's such a shock!

When Rosa Reed—aka WPC Reed of the Metropolitan Police—and her cousin Gloria decide to spend a fun-filled afternoon in 1956 at the fair on the boardwalk in Santa Bonita, California, they're in for a shocking surprise. After a ride assistant's death by electrocution is determined to be murder, Rosa finds herself entangled once again with her high school sweetheart, Detective Miguel Belmonte. Should she catch the next flight to London before she loses her heart again? Or worse, her life?

"A fun new series from the world of Ginger Gold!
Once again, Strauss begins a series that catches your attention right from the get go! Her grasp of historic time periods is bang on, even as she changes her setting to a different part of the world.
The mystery is well crafted, the new characters are compelling, and this promises to be yet another must buy series from this author!" ~ Goodread reviewer