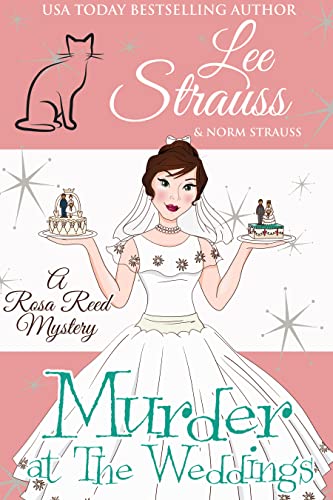 If one wedding is good, a double wedding is better! Rosa and Miguel agree that walking down the aisle with Bill and Carlotta solves a lot of social and familial problems, but the drama is notched up when a dead body arrives with dessert!

Don’t miss this final installment of a Rosa Reed Mystery series where Rosa finally gets her happily ever after.

Murder at the Weddings

Things had a way of working out.

At least that was what Rosa Reed, secretly Mrs. Miguel Belmonte, liked to believe.

Despite many obstacles—forbidden love, lost love, love found again—Rosa had finally married the man of her dreams.

However, Rosa’s happiness didn’t come without its challenges. Unfortunately, her new mother-in-law refused to accept her son’s marriage status, which, naturally, had created all kinds of problems for Rosa and Miguel, the worst of which was not being able to live as husband and wife in the same house! Sure, they could defy Miguel’s mother, but at what cost? A lifetime of familial strife? Rosa had convinced Miguel that it wasn’t worth it. What was a month or two of inconvenience in exchange for a lifetime of peace?

The reason for Mrs. Belmonte’s objection wasn’t what Rosa had first presumed, that Rosa clearly wasn’t Mexican. Rather, the real stickler was the fact that Rosa was not Catholic. Maria Belmonte, a widow, was fiercely protective of her family, and if their Latino culture was to be compromised, their religion would not. A Church of England wedding was no wedding at all!

Only a Catholic wedding would do, which was why Rosa, with Miguel by her side, was in the St. Francis rectory, sitting in Father Navarro’s humble office and discussing their imminent second wedding.

“So nice to see you all again,” Father Navarro said with a warm smile. The chairs had been arranged in a semicircle, facing him. He sat in front of his desk, making the meeting seem more like a group of friends meeting over a cup of coffee.

Along with Mrs. Belmonte, Miguel’s sister Carlotta and his partner on the force, Bill Sanchez, were with them. Carlotta Belmonte, a first-time bride, seemed as nervous as an errant schoolgirl meeting with the headmaster. Likely because she had a bambino on the way, a secret that mustn’t become widely known, at least until she was officially Mrs. Sanchez. Rosa smiled at her future sister-in-law, hoping to reassure her.

Smoothing out the satin folds of her A-line skirt, Rosa crossed her heels at the ankles. She’d chosen the pillbox hat that day, with its short veil resting on her forehead. She felt the style seemed more appropriate for the seriousness of the meeting, though the small combs that held it in place irritated her scalp.

Her physical discomfort was symbolic of the tension in the room, incongruous with what was meant to be a happy occasion occurring the next day. A double wedding! The idea had been Rosa’s. Not only did it expedite Carlotta’s big day, but a double wedding would also take the focus off Rosa and her shortcomings.

“Tomorrow is the big day,” Father Navarro began. “Happily, we’ve received permission from the bishop for Rosa to marry in the church—” The priest smiled warmly at Rosa. “With such short notice, I feared . . .” He waved a fleshy palm. “But our God is a god of miracles, so we can rejoice.”

Mrs. Belmonte, sitting straight, wearing a blouse and jacket, a pencil skirt, her hands clasped on her lap, and a tight half smile on her face, said, “Thank the Lord.”

“I’ll be glad when it’s over,” Bill Sanchez said. The burly detective had dressed in a crisp white shirt, blue tie, black trousers, and perfectly polished black leather shoes. His wiry black hair remained relatively untamed, the only outward clue to the “real” Bill Sanchez that Rosa had first met when arriving in Santa Bonita a year earlier. Carlotta Belmonte was responsible for revamping his usual unkempt appearance. Gone were the rumpled shirts, the ill-fitting and out-of-fashion trousers, and the faded shoes that looked like they had gone through a war. Rosa didn’t doubt that he’d warm up to the family life he’d be experiencing by year’s end.

He took Carlotta’s hand. “Not only because I can’t wait to start my life with my bride, but I don’t like all the hoopla. Makes me nervous.”

Father Navarro went through the agenda of the wedding ceremony to take place the next day—an extravaganza in Rosa’s mind. One had to be made of hardy material to endure a Mexican wedding, which Rosa was told often went on for two days. She and Miguel had insisted that one day of celebration was long enough. Bill and Carlotta, eager to go on their honeymoon, had agreed.

Mrs. Belmonte had taken exception to the decision, her disgruntlement still riding the surface. “A single-day celebration makes our family look cheap and inhospitable,” she said with a huff. “But I always get outvoted.”

Rosa couldn’t stop herself from casting a look of incredulousness. This had been a rare instance where the woman had been overruled.

“Mama,” Miguel started with strained patience, “we’re giving everyone double as it is, with two brides and two grooms.”

Unplacated, Mrs. Belmonte blustered, “With all the rush, we hardly had time to organize anything longer, anyway.”

Father Navarro cleared his throat, wisely changing the subject. “Miss Reed, it’s my understanding that your parents will not be here to walk you down the aisle?”

“That’s correct,” Rosa said. “Sadly, my father’s health won’t permit the long journey.” Rosa would’ve been troubled by her parents’ absence at this wedding, except they had been at her actual wedding. Since the Mexican tradition was to have both parents walk their child down the aisle, Rosa had to come up with a replacement. “My cousin Clarence and my Aunt Louisa will walk me down.”

The priest nodded. “That will do nicely.”

Rosa turned sharply to the familiar British voice coming from the opened doorway to the office.

“—Her brother walks her down.”

Rosa sprang to her feet. “Scout! Oh my goodness.” With American-style enthusiasm, Rosa ran to her adopted brother and gave him a warm embrace. “What a surprise!”

Scout smiled back. “How marvelous to see I pulled it off.” He leaned back and took Rosa in. “You look spectacular.”

Scout was lithe and strong, and his diminutive size always gave him a look of youth, though Rosa noticed deepening lines around his eyes and a hairline that had crept upwards since she’d last seen him. “You look rather well yourself,” Rosa said. Linking her arm through his, she brought him further into the room, where five sets of dark eyes stared back quizzically.

Rosa made introductions, leaving Miguel at the end. Scout reached out his hand in anticipation, and Miguel stood to accept it.

“You must be Miguel,” he said. “Sorry I missed seeing you in London, old chap.”

“It’s a pleasure to meet you finally,” Miguel returned warmly. “Rosa speaks of you often. Quite the horseman, I understand.”

“It’s a blessing to be able to spend time doing what one loves.” Scout’s blue eyes glanced at the five occupied chairs and the one left vacant by Rosa. “Do forgive me for interrupting your meeting. I was told I would find Rosa here, and I’m afraid my excitement overrode propriety.”

“Nonsense,” Rosa said. “We were just discussing details of the ceremony. And I believe you’ve just volunteered to walk me down the aisle.”

Miguel pulled up an empty chair, and Scout took it. He leaned in with interest, and at times a look of awe, as Father Navarro told him all he needed to know.