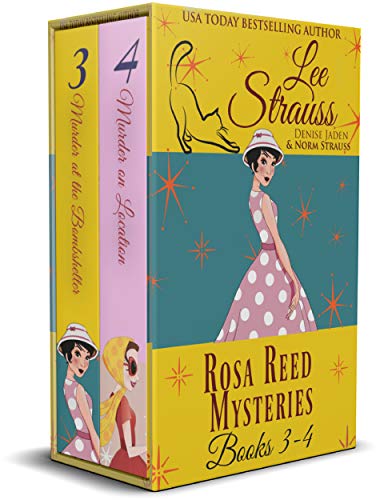 If you love early rock & roll, poodle skirts, clever who-dun-its, a charming cat and an even more charming detective, you're going to love this new series.

MURDER AT THE BOMB SHELTER

Rosa Reed's holiday with the Forester Family in Santa Bonita has turned into an extended stay, and Rosa decides to make use of her Metropolitan Police training and sets up a private investigative business ~ just like her mother! But she finds she's not the only one who keeps business in the family, and when one of the members of the prestigious Gainer family is found dead in his bomb shelter, Rosa is invited to take on the case ~ much to Detective Miguel Belmonte's chagrin. If Rosa doesn't find the killer soon, the summer of  '56 just might be her last.

Private Investigator Rosa Reed has finally accepted that her girlhood romance with Detective Miguel Belmonte has no hope of being rekindled, but when his actress girlfriend gets embroiled in a murder on her movie set, it's more than a movie schedule that's upsetting. Can Rosa put aside matters of the heart long enough to help Miguel solve the case?