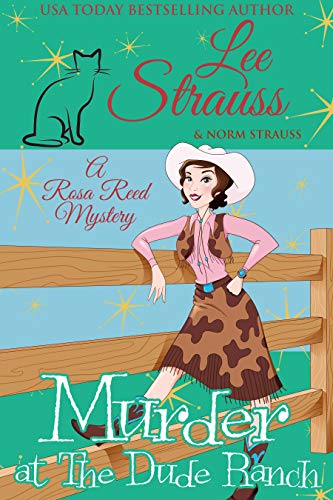 Murder at the Dude Ranch: a 1950s cozy historical mystery

Rosa Reed takes a much needed break from her thriving private investigative work by joining her cousin Clarence and Aunt Louisa for a weekend getaway at the Black Stallion Dude Ranch near Santa Bonita, California. It's the beginning of 1957 and Rosa is ready for a fresh start. Newly single, all she needs is time on the trails, and cuddles from her tabby cat, Diego.

The peace and quiet of ranch life is soon disrupted when a horse returns from a trail ride without its rider. When foul play is determined, Rosa finds herself thrust once again into a murder investigation alongside the handsome detective Miguel Belmonte.

Suspicion falls on many of the guests—the failed investment banker, the laundromat owner, the heiress, and to Rosa's dismay, her own cousin Clarence.

Can Rosa prove her cousin's innocence before the cows come home?