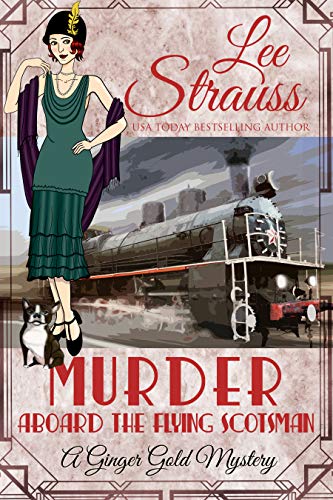 Murder Aboard the Flying Scotsman: a 1920s cozy historical mystery

One blustery day in October of 1924, newlyweds Mr. and Mrs. Basil Reed travel aboard the recently christened Flying Scotsman, a high-speed steam engine train that travels from London to Edinburgh, for their honeymoon. With only one short stop at York, Ginger anticipates time with her new husband will fly by.

She's wrong. Something terrible has happened in the Royal Mail carriage, which forces the train to stop dead in its tracks. There's been a death and Chief Inspector Reed has been asked to investigate.

It's a uniquely disturbing murder and Ginger and Basil are eager to puzzle it out together. What do the first class passengers have to do with the dead man? With another crime shortly discovered, Ginger and Basil soon realize they're not dealing with a run-of-the-mill killer—they're dealing with a mastermind who's not done playing with them yet.