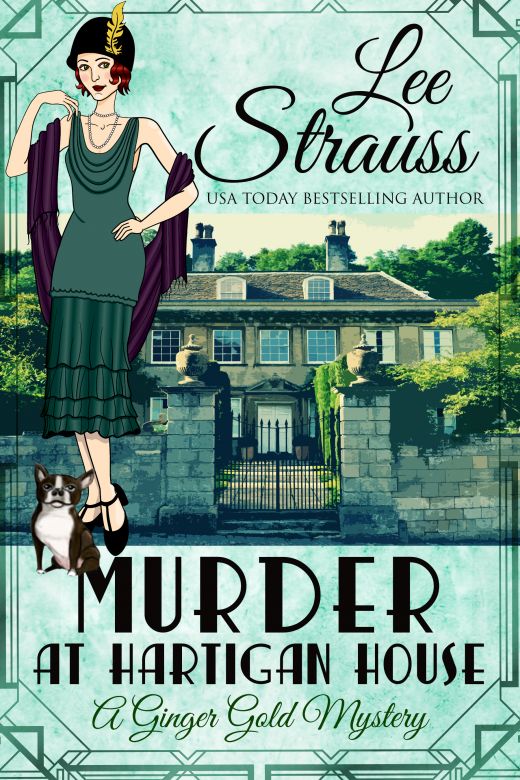 There's a skeleton in the attic!

When Ginger Gold arrives at her childhood London home ~ Hartigan House ~ she's shocked to discover decade-old remains from some poor woman in the attic.

It's a mystery that once again puts Ginger alongside the handsome Chief Inspector Basil Reed. Who is the victim? And how on earth did she end up in Ginger's home?

In order to solve the troubling puzzle, Ginger and her good friend Haley Higgins recreate a soirée hosted in 1913 by Ginger's late father, George Hartigan. A shadow of suspicion is cast on her father's legacy, and Ginger isn't so sure she wants to know the truth about the man she dearly loved.

Before the night is over, another person is dead. Can Ginger stop the killer before she becomes the next victim?

Ginger Gold hesitated at the front door of Hartigan House. She hadn’t expected to feel anything, but instead she shouldered a heavy shawl of melancholy. This grand, three-story structure built of limestone, situated in the picturesque Kensington Street of Mallowan Court, had grown tired over the war years, the stones greyer, the garden wilder. The house had been her home for the first eight years of her life. The last time she’d visited had been a decade earlier, on her honeymoon.

Her mostly happy childhood was long gone as was her lovely husband.

Haley Higgins, Ginger’s good friend and travelling companion, noticed her disquietude. “Is everything all right?”

“Hartigan House holds a lot of memories.” Ginger was torn in her allegiances: London, the place of her birth, or Boston, the place where she came of age. She’d lived in the brownstone on Beacon Hill for over twenty-two years, yet England was etched deeply in her soul.

And now, to finally return—it was with this disconcerting welcome. A telegram received while onboard the SS Rosa: GHASTLY DISCOVERY IN ATTIC OF HARTIGAN HOUSE.

Ginger, rousing her inner strength, stepped to the front door and engaged the wrought-iron knocker.

“This is your house, isn’t it?” Haley said. A lock of long, curly brown hair escaped its faux bob, and she pushed it behind her ear. “Surely you don’t have to knock?”

“I’m not in possession of a key, and I’m quite certain the door is locked.”

Haley tested the knob and found Ginger’s prediction to be true.

Ginger adjusted her yellow cloche hat, trimmed with blue ribbon to match her fine linen suit purchased on Fifth Avenue in New York, and patted her red bob with gloved hands. Her Boston terrier, Boss, waited obediently by her feet.

Their arrival was expected. Ginger had telegrammed the details of her journey before leaving Boston, and the door soon opened. Standing before them was Mr. Pippins, the butler. The years seemed to have caught up with him. His shoulders slumped slightly, and his hair had all but disappeared. But his eyes remained their bright cornflower blue, and they twinkled as he stared back at her.

“My dear Lady Gold.” He spoke her name with a slight quiver, giving away the emotion he experienced at seeing her. A dramatic image flashed through Ginger’s mind: a scrawny red-headed girl held firmly by her father’s strong hands as she wept, her eyes locking with her beloved butler as her father took her away.

A tear escaped from the corner of her eye, and she threw herself into his arms. “Oh, Pips.”

Clive Pippins, stiffening at first to this unorthodox greeting, returned the embrace. Ginger released her hold, stepped back, and clasped her hands in front of her. She sensed Pippins’s embarrassment and shared in it. There were proper ways to do things, especially in England, and showing overt affection to a member of one’s staff was not proper. She cleared her throat and smiled. “It’s so good to see you again, Pips.”

Pippins stood tall, hands relaxed behind his back. “My sympathies, once again, on the loss of your father. Mr. Hartigan was a good man.”

“Thank you.” Ginger desperately missed her father, but seeing Pippins and knowing his devotion to her helped to ease some of the pain.

Ginger glanced at Haley, who stood expectantly in her brown tweed suit and sturdy Oxford heels. “Oh, my manners. Pippins, this is my good friend, Miss Higgins.”

“How do you do, Mr. Pippins,” Haley said with her noticeable Boston accent. She reached out her hand, her eyes crinkling at the corners as she smiled. “I’m a commoner.”

Pippins’s lips twitched in amusement. He accepted her hand with a sturdy shake.

“Miss Higgins was Father’s nurse for the last three years,” Ginger said. “She’s come to London to study at the London School of Medicine for Women.” Ginger linked her arm to Haley’s. “She’s going to be a doctor!”

Ginger swooped up her Boston terrier and patted his black head affectionately. “And this is Boss. Short for Boston.”

“A fine-looking specimen, madam. How was your journey?”

“Quite lovely,” Ginger said. “Apart from a short but fierce storm, the weather was pleasant.” She omitted the news about the murder onboard the SS Rosa and the part she and Haley played in solving it.

Ginger finally had a chance to take in the foyer. Black-and-white-tiled floor, a large chandelier that hung from the height of the second level, windows on either side of the double-panelled front doors that added natural light. The formidable areca palm plants in large ceramic pots hailing from India, once lined up along the base of the stairwell, were missing—much to be expected when a house has been shut up for so many years.

“We don’t have a footman, madam,” Pippins said, “but I’d be happy to bring your things in.”

Pippins, a confirmed bachelor, had to be in his seventies now, and Ginger didn’t intend to burden him with such a laborious task. “That’s quite all right, Pips. I’ve arranged for our things to be transported here by motorvan. The driver will be able to manage.”

Ginger eyed him wistfully. “I don’t suppose you could call me ‘Little Miss’?” Little Miss had been Pippins’s pet name for her when she was a child. He was the only staff member to take time to entertain her. Subtle games like I Spy, and Noughts and Crosses (what Haley would call X’s and O’s)—never when her father was around, or in the presence of other staff, as that would be unseemly for a member of the staff. Her heart squeezed with the nostalgia.

“‘Little Miss,’ madam?” His eyes flickered with the memory, and he smiled. “I think not, madam.”

“Can I bring you some tea, madam?” Pippins asked. “After the train ride from Liverpool, you must be worn out.”

“Tea sounds marvellous, Pips, but first we must know what your urgent, mysterious message is all about,” she said, referring to the telegram. Her curiosity was greater than her desire to put her feet up. Besides, she’d had a good sleep at the inn they’d stayed at overnight in Liverpool, and she currently didn’t feel all that tired. “I take it you’ve found something distasteful?”

“I believe he used the word ‘ghastly’,” Haley said. “Such a strong word. I’m dying to know what it is.”

Pippins’s expression turned grave. “It is rather ghastly, so do prepare yourself. Please follow me.” A wide staircase circled up to the second floor which horseshoed around the foyer, giving the entrance its grand high ceiling. At the end of the passage was a door used by the servants to access the second floor. It opened to a small landing with steep steps that went down to the kitchen and up to the attic where the staff sleeping quarters were found. Rooms for women were in the west wing, and the men’s rooms to the east.

“I do apologise for bringing you into the servants’ quarters, madam.”

Ginger’s hope was that the problem in the attic was something trivial, like dry rot or black mould. She wondered why Pippins hadn’t taken it upon himself to ring for repairs. Perhaps, since he was newly back to Hartigan House and answered now to her instead of her father, he no longer felt he had the authority to make such calls on his own.

“I’m filled with curiosity, Pippins,” Ginger said. “Do give us a clue.”

Pippins hesitated, then said. “I’m really at a loss how to describe it.”

“Can we pause for a breather?” Haley said, stopping midway up the step. “I am out of shape.”

“I’m no better,” Ginger said. “Pippins is bringing us to shame.”

Pippins puffed out his chest with pride. “Years of going up and down daily, madam.”

Ginger laughed. “Perhaps we should take rooms up here, Haley.”

Before Ginger could explain that she wasn’t serious, Pippins marched down the passage in the men’s quarters to the very last room at the end. He removed a key from his pocket. “A skeleton key, madam,” he explained. “Opens all the attic doors.”

The lock clicked, and the door swung open.

As Ginger reached the threshold, she couldn’t keep a gasp of horror from escaping her lips.

In the middle of the room, lying on the floor, was a decomposed body.