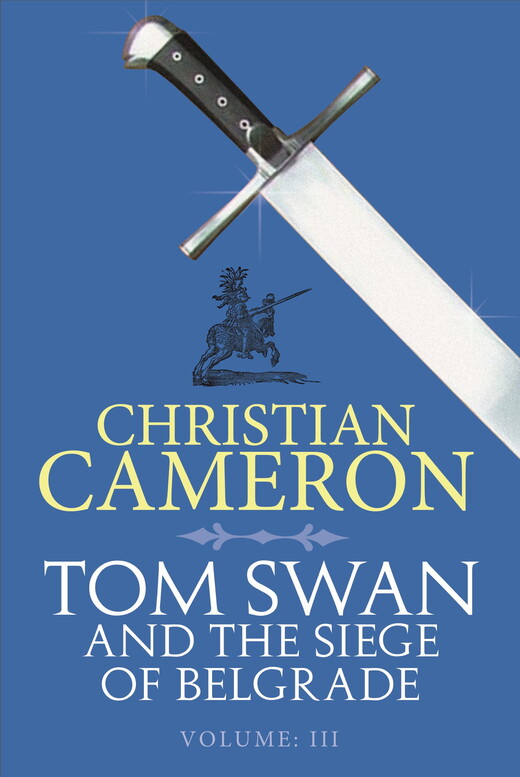 Swan’s new company of lances had been on the road together almost two weeks. For seventy men who hadn’t met before they had melded together as well as could have been expected. The Greeks had their own campfires. Malatesta’s men stayed separate from Ser Columbino’s. The men-at-arms tried to act like the aristocrats that many of them were not. The column had too many soldiers and not enough servants – no one liked putting up tents in a driving rain, and no one liked currying wet horses.

In two weeks, Swan had learned an enormous amount about military leadership. Mostly what he’d learned was that just getting seventy men and a hundred animals across the Po delta – without any fighting at all – was quite an accomplishment.

And he learned about paying. Having such a long tail cost money.

In addition to his own soldiers, Swan had been burdened with a child and his household. Sigismondo Malatesta, the Lord of Rimini, had sent his son with Swan, to be escorted safely to Venice. And the young lord required constant care and feeding, entertainment, instruction, encouragement and careful examination. The boy could lie smoothly and would lie to get anything he wanted. He would wander off at the drop of a pin to look at something that interested him. The inconvenience of the column meant nothing to him.

On the second day, he turned his horse out of the column and managed to escape detection until he was some distance away, chasing a stray dog. When Swan caught him – himself – he held the boy, now covered in mud and utterly delighted by his exploit, at arm’s length.

‘You have delayed the entire column for an hour,’ Swan said evenly. Three years of working for the Church in Rome had, in fact, prepared him perfectly for a wilful six-year-old boy.

The boy shrugged. ‘So?’ he asked. ‘You are all my servants.’

Swan sighed and returned the boy to his governess – his other problem.

Signora Sophia had returned to gowns and veils by the second day. It was not for nothing that the men-at-arms called her ‘Demoiselle Fredda’, the cold girl. She did not flirt – indeed, unless forced by duty, she did not even speak to Swan. But even through thick spring wools and layers of veils, she was a woman – and probably an attractive one.

She had joined them in disguise – as a boy. And Swan had a notion that the disguise had been effected to escape the Wolf of Rimini – her employer.

But even if he had disliked Signora Sophia – and he was very far from disliking her – he would not have returned her to the Wolf. He would not have handed an Orsini bravo with his hands red with Collona blood over to the Wolf of Rimini, the most dangerous man he’d ever met. He pretended – to Petr, and to himself – that the governess’s presence was part of a larger plan.

In fact, he rode north with no better plan than to put as much distance between himself and Rimini as he possibly could. They rode from Rimini to Ravenna, and then inland from Ravenna to Ferrara, because spring floods had made the Po delta uncrossable and they needed the Ferrara bridges. By the time Swan had his column clear of Ferrara, he had become quite smooth at using his passports, finding inns with yards big enough for all his wagons and animals, and housing his soldiers and their women.

He vowed he would never speak ill of an aristocrat again. Travelling with a train was work. Organising a river crossing was work, and arranging passports at the hazy boundaries of touchy Italian city-states was a difficult art.

The next state north of Ferrara was Venice – an empire overseas, and more recently a powerful state on mainland Italy. Her Terra Firma now included Brescia and Verona and other cities not on Swan’s route. Swan was determined to make up for lost time, and he turned east to Chioggia.

Chioggia. A small town that was at once a fortress, an outpost of Venice, a fishing port and a centre of the salt trade. Sitting at the end of a mile-long causeway from Terra Firma, impregnable amid her marshes and canals and lagoons, Chioggia was the southern gateway to the Venetian lagoon, by sea or by land.

Swan sent Petr ahead with his new page, the slightly less hunched Clemente, who now drew a bow with Petr every day at complines and matins. The boy grew stronger and a little straighter, and he was the best servant Swan had ever had. He was perfectly willing to do all the small servile tasks that Petr disdained. In two weeks, Swan was used to the boy, and so was Petr. But the boy was more Petr’s than Swan’s.

They came trotting back down the causeway just as Swan’s column had halted. Men dismounted to have a piss or to drink water – or wine, as there was a dirty hovel selling good wine just by the toll for the road to Chioggia.

Petr saluted. He had a straw hat on – they all did, men-at-arms and archers and servants, men and women. Two weeks had turned early spring into early summer, even though the mountains in the distance still had snow on them.

‘There’s a boat for us,’ Petr said. ‘Leaves for Venice when we’re aboard. The whole company.’ He grinned. ‘I think you’re going to like it – they speak of you as a hero.’

‘You recovered the head of Saint George,’ Petr said. ‘Everyone knows who you are.’

Nonetheless, his reception, first in Chioggia and then in Venice, was wonderful. Bessarion’s friends – and he had many friends in Venice – came out to greet them, and when they landed near the Arsenal off a state transport, there were a hundred Greeks to greet the stradiotes and twice that number of Venetians to greet Swan.

Including his good friend and sometime officer Alessandro di Bracchio, sometimes known in Venice as Bembo.

‘That’s a fine company of lances,’ Di Bracchio said by way of greeting. He embraced Swan.

‘They’re not all mine,’ Swan said. ‘What are you doing here?’ he asked.

Di Bracchio laughed. ‘Bessarion sent me to Ancona to tie up a loose end. And then he sent me here to pay your bills. How much are they costing us?’ he asked.

Swan turned to rifle his bags for the condotta, but Alessandro laughed.

‘Don’t be a fool – I don’t care. Truly, His Eminence sent me with money. I go with the cardinal and the fleet. You go to Vienna.’ He put an arm around Swan. ‘Damn me – I remember when you were an English boy with a Greek sneer and shit-stained linen, and now you’re il capitano.’

Behind Di Bracchio, the half-dozen stradiotes were being mobbed by their families. Di Bracchio’s servant was directing Petr.

‘I have lodgings for your entire company,’ Alessandro said. ‘Christ crucified, who is that?’ he asked, pointing at the young Malatesta.

Di Bracchio gave him a look that suggested that someone had lost their wits and it wasn’t Alessandro di Bracchio.