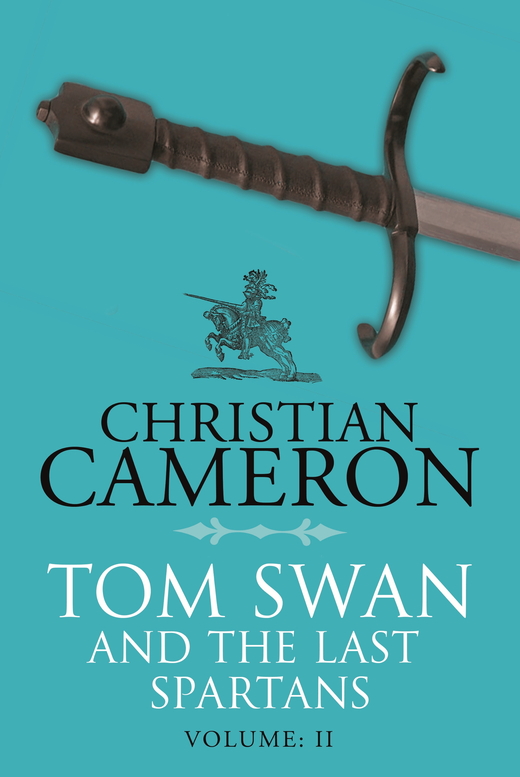 Fifteenth-century Europe. Tom Swan is not a professional soldier. He's really a merchant and a scholar looking for remnants of Ancient Greece and Rome - temples, graves, pottery, fabulous animals, unicorn horns. But he also has a real talent for ending up in the midst of violence when he didn't mean to. Having used his wits to escape execution, he begins a series of adventures that take him to street duels in Italy, meetings with remarkable men - from Leonardo Da Vinci to Vlad Dracula - and from the intrigues of the War of the Roses to the fall of Constantinople.

Tom Swan, or rather Ser Thomas Suane, knight of the Order of St Mark, donat of the Knights of St John Hospitallers, and recently, possibly, created Count of Camerino-Montorio, sometime courier, servant and even spy of Cardinal Bessarion and Pope Callixtus III, sat in a bare chamber that had only two stools and a pot for a man to piss in. The room was very clean. It wasn’t in a prison, because Florence was a civilised city, and besides, Ser Thomas was not actually under arrest.

On the other hand, the door was locked. Swan was cheered, however, that he and his companion were in a Florentine public building and held by soldiers in the pay of the city.

The other man was angry. He was not occupying the second stool, but pacing. ‘This,’ he said for the third time, ‘is an outrage.’

Swan leaned back against the wall. ‘I wish I had a book,’ he said. ‘Damn, I was right there. I could have borrowed your “Romance of Troy”.’

The other man was his namesake, Thomas Spinelli, banker and silk merchant of Florence. Spinelli frowned. ‘Who has time to read romances? I took it when a man offered it. Books are better collateral than jewels. Incredible demand.’

Swan sighed. ‘We may be about to have a great deal of time to read,’ he said.

‘Blessed Saint Thomas!’ Spinelli swore. ‘My bank will collapse if I’m out for a day.’ He looked harrowed, and his face had aged in the last hour. ‘If I didn’t know better, I’d say that this was arranged for just such a purpose.’

Swan nodded. He was afraid, but at another level he was relatively unconcerned. He kept his views to himself, however. ‘What did your lawyer say, anyway?’ he asked. Spinelli had been picked up while returning from a visit to his lawyer about the legality of doing business with Swan, as a Venetian citizen.

‘Oh, as to that, I was overcautious,’ Spinelli said. ‘You can do business here twice; once as a Venetian and again as a member of the papal family. I was reminded that Bessarion himself does business here, and so do others.’ He shrugged. ‘You cannot own a business, but you can contribute and make a profit.’

‘Not if we languish here,’ Spinelli said.

Swan shrugged. ‘Clemente will bring us dinner. I wish I’d asked him to bring books. I love to read, and I never have time. Do you think, now I’m a shareholder, that you could lend me a few?’ Swan paused. ‘Bah, of course! I can read all the books Bessarion is sending to Venice.’

Spinelli shook his head. ‘You are very calm for a man facing the Medici.’

Swan smiled. ‘I truly hope that we are facing the Medici,’ he said.

Clemente came before dark. He brought a light supper of chicken, some good broth, a loaf of excellent bread, a flagon of white wine, and a small lantern. The guards let him in with a bow, and he sneered.

‘I gave them a florin,’ he said with an urchin’s contempt for men who could be bribed.

Swan smiled. ‘I cannot tell you how happy I am to see you,’ he said. ‘Tomorrow when you come, bring me any of the manuscripts that are in the yellow oiled-silk pack in my saddle malle.’ He scratched under his beard. ‘I hope you unsaddled my nice Arab. She deserves better and I forgot her.’

Swan rolled his eyes. ‘My lord?’

‘I read some of your papers, milord,’ Clemente was insufferably smug.

Swan gestured. ‘You are getting above yourself.’

‘Except that they sent a man to take away all your papers,’ Clemente said. ‘I handed over everything I could find.’

‘Except that, unfortunately, I have a thick peasant head and forgot that you must just have packed your horse.’ Clemente’s thick head was eloquently slapped. ‘So in fact, they have no papers but your passports.’

‘And I had to read a few of them, milord, just to know what there was. You are really a count, now!’ he said enthusiastically.

Spinelli laughed. ‘It costs the Pope nothing. In a few years, everyone in Italy will be a count.’

Clemente frowned at the banker. ‘Still, it makes me so glad Peter taught me a little reading,’ he said. ‘Milord, you have only four florins left in your purse.’

Spinelli shook his head. ‘I have several thousand florins. Get one of my blockhead apprentices to come with you tomorrow.’

Clemente agreed that he would.

‘Has purchased some staves … shafts, perhaps? And is at Bersconi, the fletcher, making arrows. He sends his regards.’ Clemente looked smug, again.

‘Clemente, you are some day going to be a great man, and if you are not hanged, I hope you will remember the rest of us. What do you do to pass the time?’ Swan asked.

‘Just what you would do in my place,’ Clemente said. He winked, and slipped out the door.

Time passed in silence. Spinelli was not garrulous. Swan was thinking.

‘What do you think this is about?’ Spinelli asked, as the bells rang for compline.

Swan smiled, keeping up his unworried mask. ‘Nothing I’d talk about here,’ he said.

The next evening, two of Spinelli’s apprentices came with a table, set it for dinner and served as if they were eating in the casa Spinelli. Then each of them delivered a memorised oration on the day’s business, and Spinelli signed some papers. Clemente came a little later.

‘They came back and looked for more papers,’ he said loudly. ‘They ignored me when I told them that you were a courier for the Holy Father.’

‘What could I do? After I protested, and Kendal convinced the men to sign a chit, I gave them the Holy Father’s letters for the Bishop of Milan,’ Clemente said, still speaking loudly.

‘Stop calling me that,’ Swan said.

‘Never!’ Clemente insisted. ‘Listen. Perhaps you, a gentleman, would fight to the death to protect the Pope’s letters. Pfft. Now you’d be dead. But I am a peasant and the son of a peasant, and I said … “Sign here.”’ He laughed.

Spinelli laughed too. ‘If the count, here, is ever fool enough to kick you out of his household, you come straight to me, Messire Clemente, and I will find you work as a factor.’

‘Only what Master Peter got,’ Clemente said.

On the morning of the third day, Clemente came early, with a book of Plethon’s philosophy and Swan’s ‘travelling court clothes’, or rather the best suit he packed for travel. He’d worn the suit to church on Sunday. It was brown with embroidery, and in Florence it looked a little dull, but his best clothes, the Venetian doublet and hose, were still in a trunk in Belgrade.

‘Men came and told me to prepare you to meet an important personage,’ Clemente said.

Clemente vanished for fifteen minutes and returned with a big copper basin of hot water. Swan bathed, shaved and changed into his better clothes. He felt naked without a sword or at least a dagger; in fact, he didn’t even have a belt and purse.

Clemente tidied their prison room for a while and retired.

Swan and Spinelli played chess. ‘Who is Plethon?’ Spinelli asked. ‘This is Greek, I take it?’

Since Swan had discovered that Spinelli was well educated in Latin, he suspected he was being primed.

‘Yes. These are the ancient Greek letters.’

‘Very different from the Etruscan that our ancestors wrote here,’ Spinelli said. ‘I have been in several tombs.’

‘Ah,’ Swan said, making his move. ‘I would love to see some of the tombs.’

Spinelli discussed the marvels of the two he’d seen. ‘And this Plethon? Is he the philosopher who was here for the Council? Old Cosimo adored him. I was too young to have free time to hear him lecture.’

Spinelli smiled. ‘You make me talkative,’ he admitted.

He was summoned to the window by a voice calling. This was not unusual; they were not in prison, and Spinelli had many friends and relations who came to speak to him or even transact business.

While Spinelli talked to a weaver at the window, Swan read Plethon, who was, it was readily apparent, more than just a heretic, as Giannis had called him in Rome. He was something of a pagan. Swan read him with delight and thought of Cyriac of Ancona, who had also worshipped some of the ancient gods.

Thinking of Cyriac made Swan think of the small black book of closely written papyrus pages which Cyriac had given him. His heart beat very fast as he thought of what Alberti, for examp. . .