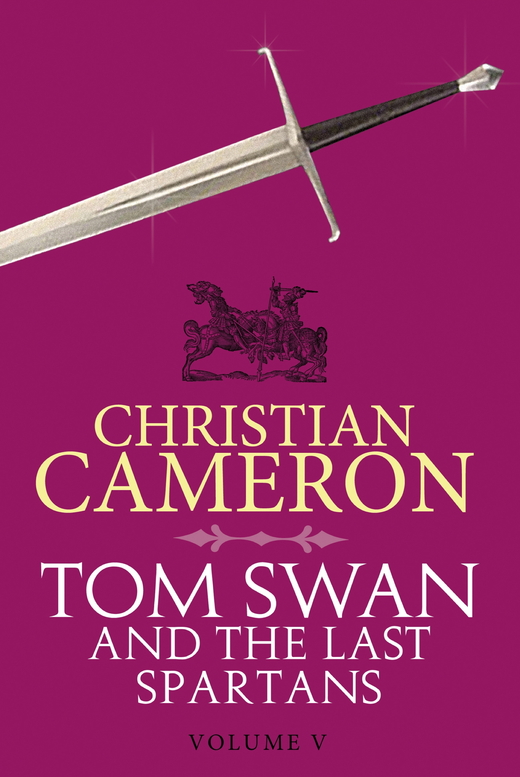 The latest instalment of the Tom Swan adventures - the fast-paced serialised novel set in the turbulent Europe of the fifteenth century. Available exclusively in eBook.

Swan awoke. He came completely awake in a single bat of his eyelashes, and he sat up, almost smacking his head on the beautiful coffered ceiling of the great cabin of his friend Alessandro’s fighting galley, and setting his hammock-bed swinging wildly. Swan managed to get out of the wood and canvas contraption, but only at the risk of complete humiliation; the risk wasn’t justified, and Bembo’s chuckles pursued him out onto the gallery, where he relieved himself while looking at a red morning with a tower of dark cloud away over Asia.

To starboard, the fortress and city of Mytilene were lit by the rising sun, a magnificent array of pastel hues, Genoese frescoes and Greek whitewash.

‘If you are done pissing into my ocean, we could have a morning swim,’ Bembo growled. Fastidiously, because he was, after all, the scion of one of the richest families in Venice, he walked around to the other side of the stern gallery and leapt into the sea. Swan followed him, striking out strongly after he rose to the surface, foolishly and irrationally trying to distance himself from his own piss. He swam strongly, pursuing Bembo, feeling the current that ran through the whole strait between Lesvos and Asia and feeling also the coolness of the water.

‘Storm coming,’ Bembo called. They swam the length of his galley, and Swan realised that his friend was looking at his ship from the waterline like a professional captain.

They swam down the port side and then turned and swam alongside one of the papal galleys. Like their Genoese counterparts, and unlike those of the Venetians, the papal galleys had some slave rowers and they stank.

They swam around the stern, and Bembo went down suddenly, diving deep.

Swan followed him. The water was so clear that in the ruddy light he could see Bembo’s legs kicking away and the helix of bubbles he left behind.

Bembo went right under the shallow hull of the papal galley. He rolled over when he reached the stem, so that he was on his back, his long hair trailing behind like a mermaid’s, and Swan almost lost the air in his lungs at the humour of the image, and he had to strike out with powerful strokes to reach the surface, where he gasped for breath, laughing.

One of the papal officers came to the rail and began to curse.

Bembo surfaced farther out, and Swan swam towards him while the papal officer shouted imprecations in Genoese dialect.

They swam slowly back along a third vessel, one of the Gatelussi warships. Once, the Gatelussi had possessed the most powerful fleet in the eastern Mediterranean, but time and riches and decadence had run down their sea power and now they had only six hulls. Yet, as Swan knew all too well, the six warships they possessed in their dotage were the equal of the six warships that were the whole of the possession of the Knights of St John Hospitaller, a military order dedicated to crusade. With all the revenues of the Order in the Western world, they could maintain only six great galleys; and alongside the Order’s galleys and the galleys of the Gatelussi, the Genoese, and the Venetians, who had only sent six of their eighty, there were the galleys of the Pope’s new fleet; fourteen warships that Swan had just learned the Pope had built at Venice’s rival, Ancona. The whole tithe of the Christian world apparently produced only fourteen warships.

But however the cost was counted, the forty military galleys and assorted supply ships floating in long lines at anchor in the pink-tinged sea or drawn up on the open beach under the guns of the fortress represented the largest concentration of Christian warships anywhere in the world, and the largest fleet in the Mediterranean.

The problem was that Swan was counting the cost. It made his head hurt despite cool water and a good swim, and eventually he gave up and swam powerfully for Bembo’s Venetian vessel. Alessandro had already gone up the companion ladder that hung from the gallery, where Umar, his African servant, handed him a towel. The two of them were discussing something in Arabic when Swan came up the ladder, and Clemente appeared, handed over an identical towel and held a small silver tray with a single cup of quaveh.

Umar raised the towel in his hands and sent the tray out of Clemente’s hands and into the sea.

Swan took his towel and rolled his eyes at Bembo, who shrugged.

Swan considered making a nasty comment about people who took their lovers to sea, but decided to let the moment pass. ‘I’d settle for another cup of quaveh,’ he said. ‘Anyway, it was your silver plate.’

He went into the cabin. He rarely scored off Alessandro; he savoured his moment and his clean exit. And began to dress. Fashionable Venetian clothes were absurd in the sun of the Mediterranean summer; Swan had evolved a successful fashion strategy whereby, as a sometime professional soldier, his arming clothes were always correct. As his arming clothes consisted of a series of fustian doublets with arming points and lace-on maille voiders, comfortable hose and clean linens, he was lighter by many layers of wool and silk; plain brown and black where Bembo wore blue and gold; fewer layers and more ventilation.

Despite which, they were ready at roughly the same time. Bembo went up on deck and looked at his watch-board by the helm, where a junior officer, a Venetian ‘young gentleman’ learning the ropes, stood harbour watch. Most of his rowers were ashore; Venetian rowers were free men with wages and permission to ship small cargoes; every oarsman was a merchant, many of them workers from the Arsenal.

Bembo smiled at the young man at the empty helm. Swan’s views on age had altered since Belgrade, or even before; he felt like an ‘old man’ and he viewed the sixteen-year-old aristocrat at the helm as a child, even though in fact he was a mere eight years older.

The boy looked self-important, saluted, and took the note tablet back from Bembo.

Swan nodded and went below. Clemente was already packed, and had his own kit as well. He was smug. Umar seemed to be nursing one arm.

Swan left the matter alone. Whatever small war was transpiring between Umar and Clemente, it was best not to be involved, Swan knew.

Alessandro followed Swan to the side, where a small boat waited with four oarsmen in the Bembo family colours. All three men leapt easily down into the small boat, and the oarsmen gave way together like the professionals they were and ran them across the harbour to the great Capitano, the huge command galley that Cardinal Trevisan used as his headquarters.

Swan looked at the water with a certain hesitation.

‘Worse before it is better,’ Bembo said. ‘That’s why I said to pack a bag.’

‘I required him to perform a small task. Will Clemente condescend to serve me?’ he asked.

They rowed in under the stern of the Capitano but the watch officer shouted that the cardinal had gone ashore with all his staff.

Bembo sneered. ‘And that man calls himself a Venetian,’ he said.

‘There is absolutely no reason for us to risk our ships in this weather,’ the cardinal said. He looked slowly around. He tried to straighten his hunched shoulders, to enhance his stature, but he remained a small, ugly, round-headed man whose anger had a hint of a whine to it.

Outside the magnificent hall of Prince Francesco of the mighty, if somewhat reduced, Gatelussi, sheets of rain slashed at the glass windows and rattled the casemates. Now the inner harbour was aboil with waves and the outer harbour had long rollers crashing against the mole. The Venetian ships were anchored fore and aft outside the breakwater; a deliberate insult, or so Swan had assumed, since the papal galleys, the Gatelussi and the Knights of St John were all dominated by the inveterate enemies of the republic of Venice – the Genoese.

Swan sat off to the side, watching. He had no role to play; he had been appointed to the expedition by the Pope, but so far had not even read his commission. His sixty cavaliers, most of them in the very best armour that Venetian or church money could buy, were all distributed among the Venetian galleys, with another sixty armoured squires and men-at-arms to back them up.

Trevisan was a tyrant; not just a tyrant, but a cautious tyrant, that much was clear. He had the largest fleet on the ocean and he was clearly unprepared to risk it.

If what Swan suspected about the cost of its construction was true, he understood the cardinal better than he might have otherwise. Regardless, the last few years had begun to teach Thomas Swan, Knight of St Mark and donat of the Order of Saint John, a certain humility, and a willingness to sit silent, at least until called upon.

The rain slammed against the walls and fell away. The waves roared against the breakwater and tugged at the cables of the Venetian ships anchored out.

Swan listened to the officers discuss the minutiae of the ordering of the squadron as if these were vital issues. So many bullocks slaughtered; so many bushels of wheat and barley for bread, an escaped slave …

He might have drifted off to sleep, but instead he caught the eye of Prince Dorino Gatelussi. They had met before. The ascetic-looking blond prince, old and young in the same body, a whole character of paradox, smiled a thin-lipped smile at Swan, and very subtly pointed one long finger at the gallery that overlooked the hall; remnant of a time when musicians played from such balconies.

There was a faint scent, a rustle of silk, and Swan was looking at Donna Theodora.

He leaned back to have a better look, his face relaxing, when a hand descended on his shoulder.

‘And now you are a knight of Saint Mark,’ Fra Tommaso said. The eastern Mediterranean’s most notorious pirate stood above him, smelling of the sea and soaking wet. ‘My astrologer said I’d meet an old friend here.’

Fra Tommaso Dandalo, Brother Knight of Justice of the Order and terror of both Christians and Turks, opened his arms, and Swan rose and accepted the wet embrace.

‘What brings you here, you scapegrace?’ Fra Tommaso asked.