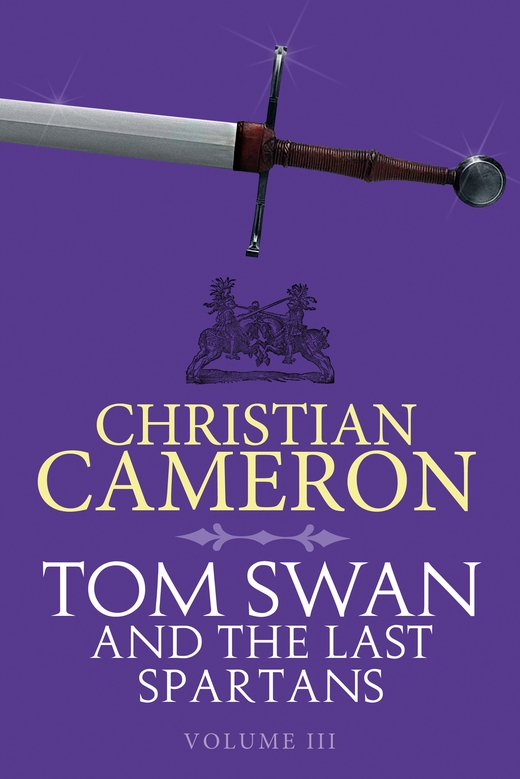 The latest instalment of the Tom Swan adventures - the fast-paced serialised novel set in the turbulent Europe of the fifteenth century.

Demoiselle Sophia was naked; half-turned away from him in the glorious evening light of a Venetian sunset, her pale skin bathed in hues of pink and gold. She looked back with a longing in her eyes that moved Swan deeply.

He reached to take her breasts in his hands.

He hesitated, and reality flickered around him.

‘Dawn, messire. First light,’ Clemente’s voice said, and the cold reality of dawn in a pavilion deep in the mountains of Albania at the very edge of winter poured into his consciousness with all the crushing force of a cavalry charge. Demoiselle Sophia’s naked body vanished, to be replaced by all the cares of running a company of lances; a set of cares that included immediate worries about drinking water and fodder for horses, and longer-term concerns about the reception his company might receive from the occasionally fickle and always dangerous Iskander Bey, sometimes known as John Scanderberg, de facto ruler of Christian Albania.

Swan really wanted to close his eyes and return to sleep. Sleep had been better, although the most cursory examination of his memories of the dream he’d had suggested that he’d put Sophia’s head on Violetta’s body. He had only a vague impression of the demoiselle’s body, whereas Violetta’s he knew and remembered well.

‘Messire. You said to wake you,’ Clemente said again, this time closer.

He could tell it was; he was talking to prove that he was awake. Clemente had found wine in a camp with no wine.

‘My lord,’ Clemente said. It was odd that the words were so respectful, as the reality was that his tone conveyed perfectly, in Italian, the contempt of the early riser for those who lie abed.

Swan swung his legs over the edge of his camp bed. It was cold; he was already cold, and the long draught of hippocras didn’t do much to dispel it. The brazier had gone out long since, and in fact was gone; already packed on the baggage wagons. His clothes were laid out on a folding stool; there was a small square of woven grass on which he could stand while he dressed. As soon as he stood up, a pair of archers grabbed the bed, stripped it, and folded the frame, which vanished out the door. He hadn’t even grunted ‘good morning’ at them.

Swan’s legs hurt, his back hurt, and his hands burned as if they were on fire. And he slept in a bed, off the ground; all of the men serving him had nothing but blankets and perhaps an armful of straw to keep them from cold and damp.

He got into clean braes and a clean shirt; ironed, no less, and smelling of rose water.

Alessandro Bembo rose from the second folding bed and sniffed.

‘You smell beautiful,’ he said. His smile was mocking.

Bembo nodded. ‘As do I,’ he said. ‘Remind me why I wanted to accompany you?’

‘Boredom?’ Swan shot back. He wasn’t good at being mocked first thing in the morning, which was odd, as he’d had years of it.

Alessandro nodded. ‘Of course,’ he said.

‘Duty to the Serenissima?’ Swan said.

‘Enlightened self-interest, anyway,’ Bembo said. ‘Christ, why do I not get the hippocras?’

As if summoned by the thought, Umar appeared. A new smell filled the tent; foreign, slightly bitter, slightly sweet.

Umar smiled. He poured a small pottery cup of the stuff for his master and then, turning to Swan, indicated that he had a second cup.

‘No, none for him, the ruffian,’ Alessandro said. ‘All for me. I will be alert and he will be drunk.’

Swan took the cup from Umar anyway, just as Clemente returned with a steaming cup of hippocras which he handed, with a silent bow, to Alessandro.

The two friends exchanged a long look. And both laughed.

Outside, the morning was so young that the sky was not yet even a pale shade of pink; there were, in fact, still stars.

Juan di Silva shook his head. ‘Five more nights like that and we’ll be losing horses like a camp with the horse plague,’ he said. ‘We have a dozen sick horses right now.’ He kicked a wooden bucket full of water to show his capitano that the top of the water was frozen solid.

Ser Columbino shrugged. ‘On the other hand,’ he said, ‘we have no trouble whatsoever with desertion.’ He smiled. ‘Because really, it’s like hell out there. A damp, cold hell.’

Out there was the mountainous terrain of central Albania. Off to the west, the sea loomed, but it was still fifty miles or more away.

‘Grazias is already away?’ Swan asked.

‘Before the moon set,’ Ser Columbino said. He leaned even closer to the fire. ‘Other Dmitri is already back with the start of the route.’

Every day the scouts went out at dawn, and set up a chain of guides for the company to follow. The roads in Albania were non-existent; there were no maps; they had tracks the width of two wagon-ruts if that, and the heavy military wagons that the company used could not easily be turned around with a four- or six-horse hitch, especially in a mountain pass or with a steep drop to one side or the other. They’d lost their way twice in six days, and the nadir of the trip, so far, had been a day’s trip on an apparent dead end. They turned the wagons, taking hours to do so, only to return to an earlier camp and the news that Grazias had been wrong. They had been on the right road, and they had to turn all the wagons again. And repeat the day’s efforts.

That had been three days ago.

The other issue to Swan was the condition of his company. The men were in good spirits, or as good as could be expected in difficult country at the edge of winter, but their material condition was terrible. There were men without shoes, and men whose boots were nothing but collections of patches; hose worn footless and hanging like growths; jupons burned to a pale pink from deep red by months of sun, out at the elbows and sometimes at the shoulders. Hats were ragged, shapeless things; hardly any soldier sported a feather, much less a plume. The condition of the armour wasn’t much better; six months in the field had wrecked buckles and straps, cut laces and replaced them with various makeshifts; most of the armour was rusted to a deep brown, and waxed, because no one had time to polish it, and the only bright metal on most men was their dirks and swords.

The horse tack looked better, but that was, for the most part, because they’d had the pick of the Turkish camp to loot, and many men were riding Turkish saddles. Most of the archers, whether English, Hungarian or Italian, had Turkish bows and Turkish arrows; indeed, only three of the English had heavy yew war bows, as the rest had worn or broken. Some men simply had no heavy livery arrows left, and so had swi. . .