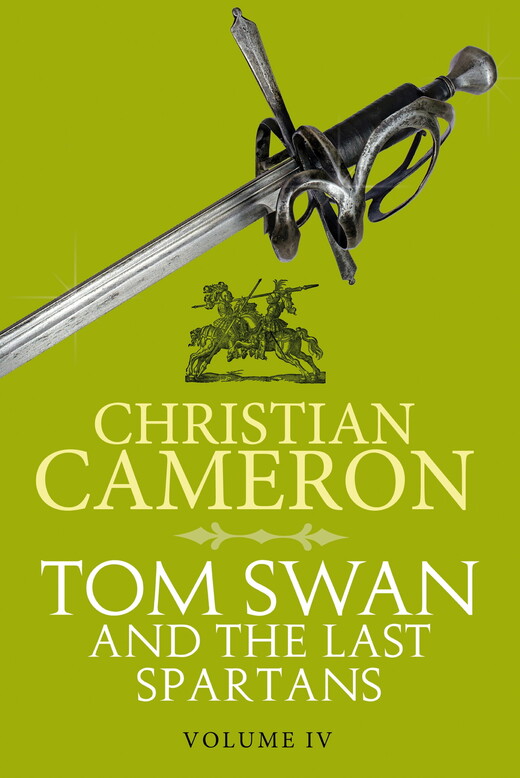 The latest instalment of the Tom Swan adventures - the fast-paced serialised novel set in the turbulent Europe of the fifteenth century.

Tom Swan awoke slowly. A magnificent Greek sun, almost untouched by winter, poured in through the tall arched window across from his closed bed. The hangings had been opened and the fire in the curious Greek fireplace made up.

He felt wonderful; clear headed and well rested, the best he had felt since getting wounded. He’d slept for a long time …

‘Clemente?’ he asked the empty room.

‘Despotes,’ said a voice. There was a boy standing like a statue by the door. ‘What is your pleasure, lord?’ he asked in Greek.

Tom stretched like a cat. Demoiselle Sophia in my bed, naked and willing, would about cover the possibilities. The room was light and airy, and well appointed. It was in the Imperial Palace of the Despot Demetrios; it had been designed and built by the very best of the architects of Constantinople and Venice, and the stonework, the details and the hangings were magnificent.

It was all a long way from a freezing tent in Albania.

Swan rose, went to the window and looked out over the Vale of Sparta laid out like a green and brown map at his feet. The palace sat at the third level of Mistra, about halfway up the mountain, and it looked out over a four-hundred-foot drop to the road below. The fortress towered above it; a magnificent piece of modern military engineering.

In Greek, Swan said, ‘Let my Clemente sleep in for once, but would you fetch me a little food and something to drink?’

‘Whatever the foreign lord wishes,’ the boy said, and went out through the door. Swan did some more stretching, trying to get his shoulder and back to respond properly; both needed exercise and were stiff.

The boy returned with a tall amphora of wine and some bread and olive oil. The bread was stale, but Swan was a veteran of many days and nights in Greece and knew that this was what everyone ate. He rubbed his bread with a little garlic from a dish, dipped it in olive oil, and ate it with appetite. The wine was delicious; Sparta had good red wines, as good as Italian wines. The boy was horrified when Swan drank his morning wine neat, with no water added. But his expression made clear that this was just one of many horrors he expected from a foreign barbarian.

Swan found his bags laid out on the floor; he noted that near-constant campaigning had all but ruined the linen canvas bag that held many of his possessions and that his leather saddle malle was very much the worse for wear. Like those of his company, whose armour was brown or worse. They had received new clothes and supplies from Venice; they needed time to sort them, to repair armour, polish it … most of the company’s crossbows had lost their heavy cords, owing to neglect, emergency and winter; they would all have to be replaced.

On the other hand, Swan and his lieutenants had done the impossible; they had brought a company of lances across Albania from Belgrade to Mistra. Looking back over the string of fortunate incidents, lucky victories and miraculous communications, Swan was tempted to see the hand of God in his affairs, but his basic cynicism won out and the hand of Venice looked heavier.

He smiled and finished the wine.

By afternoon, the lower town of Mistra appeared to be under siege by Italians and Germans and English archers. Anxious Orthodox nuns scurried along the street; the city contained over a hundred churches, monasteries and nunneries, many of their occupants exiles from Constantinople; every second person on the street was a religious, and none of them liked the presence of so many armed foreigners, cursing, pushing into tailor’s shops and cutlers or leaning against the taverna walls, drinking their fill for the first time in months.

‘Get thee to a nunnery!’ shouted Will Kendal at a particularly handsome nun in a very severe veil. There was no part of her showing, and yet her form and grace were obvious.

‘I know, I know. Be an example.’ Kendal shook his head. ‘Ye know, Ser Thomas, before I met ye, I liked a jug o’ ale and a lass, and I seemed to find it easy to have either. An’ now that you’ve made me agent, I’m fuckin’ ruined. I can’t punch some lout in the street, I can’t grab a girl for a quick cuddle, and I drink wine, and the worst of it is that I don’t even want those things anymore. It’s like a fucking sickness.’

He looked after the lithe form of the nun, swathed as she was from head to toe in dark grey wool.

Ser Columbino, neatly dressed in dark red, appeared from the taverna. ‘Eh, Illustrio? Is there trouble?’

‘No trouble at all,’ Swan said. ‘Only I need everyone to know … bah. Bast. Get Orietto.’

‘Certo, Illustrio.’ Columbino bowed and went back into the dark, crowded interior. Swan followed him, and after a near-altercation with a table of archers, they borrowed Master Cressy and sat in a rough circle.

‘We’re here for a while,’ Swan said. ‘The Pope didn’t specify whether we were to serve Demetrios or Thomas; Demetrios rules from here to Monemvasia, and Thomas rules in the western Morea. Thomas is the Turk fighter, and Demetrios is the one who has Turkish allies, but this is where we were sent and we will play the hand as best we can. Understood?’

Di Silva smiled with no humour. ‘So we do not trust our patrone?’

‘Exactly. Further, I may have to go; almost certainly. I will probably take some of the men-at-arms with me. I can’t say where or when yet. Columbino will remain, commanding the compagnia in the service of the Despot. The Pope is paying, so as of today everyone can expect regular pay. I have a financial instrument that I can cash on the Medici, here, and I will before I go.’

Orietto nodded. ‘That’s good news. Most of the lads will be out of hard specie by tonight.’

‘How many Albanian girls did we bring away?’ Swan asked.

There was a lot of shifting and moving eyes, especially from Orietto, who had an Albanian mistress with whom he was very obviously smitten.

Columbino leaned back. ‘A few,’ he ventured.

Swan nodded. ‘I venture it was more like fifty,’ he said. ‘It was the first thing the Despot mentioned this morning. This is a very religious city. The Despot tells me there is no prostitution here. And we are here on his sufferance.’

‘We’re here to save his worthless arse,’ Orietto said, and the rest nodded.

‘That is not how it appears to the Despot or his people. To them we are foreigners; perhaps as bad as Turks, perhaps worse. So here is my rede; if a man brought a woman here, she lives with him and on his pay as if they were married. No exceptions. Understood?’