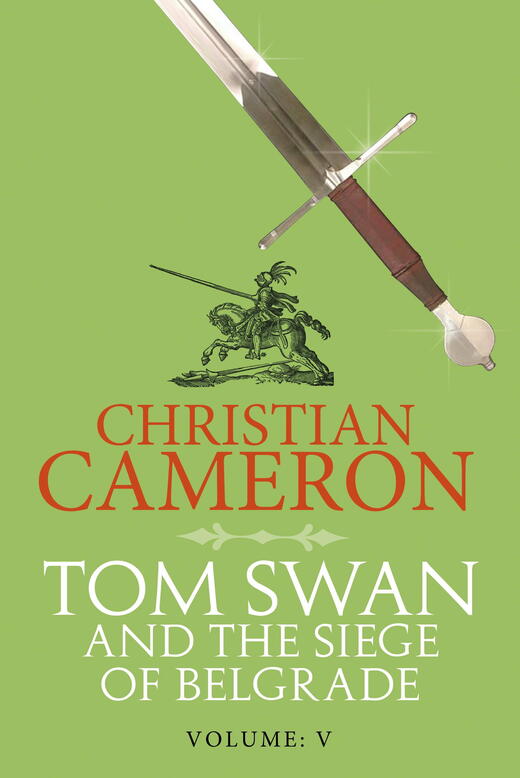 Fifteenth Century Europe. Tom Swan is not a professional soldier. He's really a merchant and a scholar looking for remnants of Ancient Greece and Rome - temples, graves, pottery, fabulous animals, unicorn horns. But he also has a real talent for ending up in the midst of violence when he didn't mean to. Having used his wits to escape execution, he begins a series of adventures that take him to street duels in Italy, meetings with remarkable men - from Leonardo Da Vinci to Vlad Dracula - and from the intrigues of the War of the Roses to the fall of Constantinople.

The Danube flows from Vienna to Belgrade and past it to the sea, but Tom Swan, Englishman, knight of St Mark of Venice, servant of Cardinal Bessarion, volunteer of the Order of the Knights of St John Hospitallers, and currently crusader, had chosen to lead his company of lances and his newly recruited German noblemen by road rather than by river. His reasoning had everything to do with horseflesh and nothing to do with money – in fact, for once in his cash-strapped life, he was all but rolling in funds.

In Bratislava, where Bohemian heretics seemed to rule the town, he bought his men the best dark beer and paid them a month’s wages in advance – a virtually unheard-of action for a captain. De Vecchio – an ally, if still a hesitant one – approved, but Ser Columbino shook his head.

‘It is better to be feared than loved,’ he said. ‘Someone will desert, and someone else will commit rape or murder.’

Swan shrugged, as he did all too often, armour or no armour. But he did pick up more than a dozen Bohemian heretics, big, handsome men with hand-gonnes over their shoulders, swords, bucklers and ponies. They seemed to have half a dozen women with them – two of them the handsomest wenches Swan had ever seen. They had their own wagon and did their own cooking.

‘Whores?’ Swan asked the leader in his new, and not very efficient, German.

The Bohemian’s name was Ladislav – in fact, everyone who was not Jiri appeared to be Ladislav that summer. Ladislav was taller than Swan and wider, too. He had a heavy blond beard and big blue eyes and the eyes were the expressionless pits that killers bore. They were not windows to the soul – or if they were, there was nothing at the bottom. He had deep lines on his face. Only his ability to laugh saved him from seeming nothing but an empty thug.

For a moment, Swan thought he’d misspoken badly. He actually took a step back.

Ladislav didn’t seem to notice. He raised an eyebrow. ‘Perhaps,’ he said after some thought. ‘You are a soldier – hein?’

Swan nodded. In fact, he was beginning to remember why he hadn’t liked soldiering back in France. But after Vienna, spying held no charm either.

Ladislav made a face. ‘I killed my first man when I was thirteen,’ he said. ‘Catholic crusader. Hein? He was old enough to be my father.’ Ladislav shrugged. ‘After Český Brod – that was almost twenty years ago now.’ He didn’t laugh. He just looked at Swan. ‘I was an Orphan. You know what that means?’

‘You were a radical,’ Swan said gently.

‘I was a boy!’ the man said suddenly, and too loudly. ‘Then I was a man. All I can do is fight.’ He shrugged. ‘The girls – all they can do is fuck. Does that make them whores?’ His mad blue eyes looked at Swan. ‘This is how it is, here.’

Swan thought of many things when he looked into the man’s eyes. He thought of Tilda, long ago in France. And of a French whore emasculating an English archer, and what that said about her life. The nuns in several convents.

‘Yes,’ he said. He turned and walked away.

The Bohemians spoke all the local languages. Peasants feared them – many made the horned sign of evil whenever the Bohemians looked at them. They did the same for the stradioti.

‘They call us Turks,’ Constantine Grazias said with a laugh. ‘Because some of us were Turks.’

Grazias glared, and Swan thought he needed to think of more clever lines. But it was true – the handful of Albanians and Greeks were feared like no one else by the peasants in the countryside, most of whom spoke German, but some a startling cacophony of Slavic languages.

Past Bratislava, with the Bohemians as guides, they swung south towards Budapest, where they purchased horses and more wagons, wheels and a wheelwright. Swan didn’t ask how they were ‘buying’ a wheelwright. He simply authorised the purchase. He visited the Jews in Pest and found a house that would cash one of his letters of credit on the Medici. His efforts to socialise were firmly and politely rebuffed.

His soldiers seemed to feel that Hungary had been made for looting, and he had real difficulty explaining to his German ‘crusaders’ that they could not steal poultry to feed themselves. One night south of Pest, with the great Hungarian plain beginning to roll endlessly in front of them and a sky beginning to fill with stars above, Swan confronted a ‘crusader’ whose squire and men-at-arms had just killed a house full of peasants for their sausages. Swan suspected they’d raped the women, too.

Ser Columbino put a hand on his shoulder. ‘We are not choirboys,’ he said.

The German knight was incensed at Swan’s anger – an all-too-human reaction. ‘These people should pray for us!’ he shrieked. ‘We are saving them from the Turks!’

Swan had had enough.

‘Your men killed them,’ Swan said. ‘This is saving them?’

The German paused, his mouth moving. Another of the crusading gentlemen rode up with his retinue at his back.

He had to walk away. They were not his soldiers …

One of the German soldier laughed. ‘What’s he going to do? The Italian piss-ant? Scold us?’ the man asked, in German.

Swan took a deep breath and silently counted to ten. In German. In his hand was his staff – a short baton of command that Ser Columbino had put in his hand after Vienna. Perhaps a reminder to act like a great nobleman, and not a bravo.

Then Swan stepped forward until his breastplate was almost touching the German officer’s.

He tapped his baton on the man’s armour. It was not quite a rude gesture. ‘Give over that one,’ he said.

‘Why?’ asked the German. He was Carl von Drassag, a younger son with half a dozen ill-armed ‘men-at-arms’ more like English hobilars with rusty helmets and poor horses. If Swan had to make an example, Drassag was the one.

‘Because I’m going to hang him,’ Swan heard himself say.

Von Drassag took a step back. ‘Now – good my lord,’ he said. He smiled without any good intent. ‘These men are gentles. A few peasants? Slavs and heretics. What matter?’

Swan pointed his staff. ‘That man. Di Vecchio? I want him hanged.’

Swan had seldom been prone to rage. Anger, yes, but Vienna had unleashed something new and dangerous and ugly. Swan’s body was crying out for violence. Violence was the solution he craved.

The German shrugged. ‘That is impossible,’ he said. ‘He is one of my men.’

Swan’s baton licked out and caught the German knight in the temple. The German was fully armoured, but his helmet was on his saddle.

Swan stepped in, passed the baton under the man’s flailing left arm, and threw him to the ground, then kicked him between the legs with his steel-shod sabaton.

Swan forced himself to back away. The German knight was weeping, and had fouled himself.

It was as if a red mist had come in front of his eyes, and he was … afraid. The only experience to which he could compare this was being under the earth at Rhodos.

He wondered whether he was possessed.

‘Take the criminal and hang him,’ Swan hissed. He turned and began to walk away.

Di Vecchio had a dozen men-at-arms and Ser Columbino had five. They took the man, who had been injured cruelly in trying to resist. They put him, moaning and begging for mercy, abject, a pitiful thing, on a pony with a halter around his neck.

Swan mounted and rode until he was face to face with the German soldier, who was perhaps six years younger than he.

‘We have no priest,’ Swan said. ‘Would you care to pray, mein herr?’

The boy mumbled, terrified, through a paternoster. It was grotesque.

‘This has gone far enough, Captain,’ he said. ‘I will see this man does not offend again.’

Swan looked back for a moment at Ser Columbino with his squire, and . . .