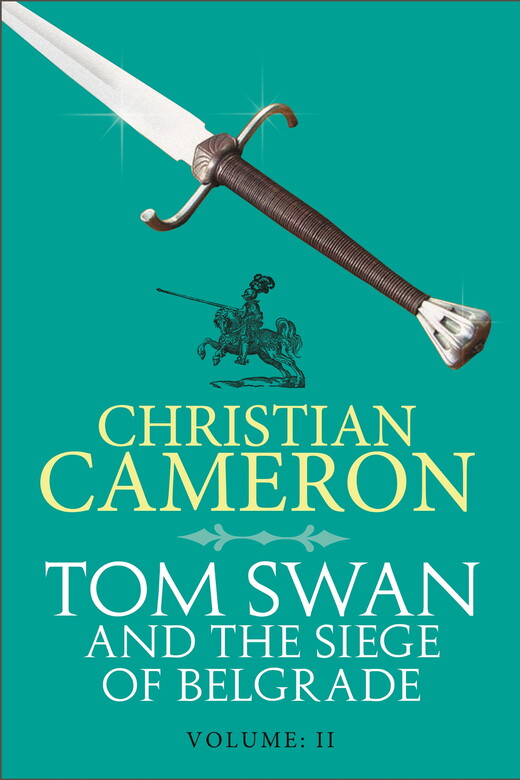 Since there was no shadow on the man, Swan felt more confident. He had worried about the Wolf since being assigned to come here, and now, looking at the blank walls and high towers, he couldn’t imagine how to find the damned ring, much less how to steal it.

But his concern for the ring and his little plots was subsumed by his concern for his prize possession – a first-class warhorse. He let his stradiotes go off with a stable boy, and Peter gave a casual salute and followed a page to the barracks tower. Antoine lingered for a moment. ‘You good here, boss?’ he asked, his hand on his sword hilt.

Swan felt a moment of intense warmth for both of them. They were good men. But he looked around at the stable and the men there. Not a weapon in sight. ‘Thanks – go and get dry,’ he said.

The castle had a fine stable and its own master blacksmith, and the smith sent for a farrier, who shook his head and muttered – and reshoed his horse in less than an hour, a truly masterful job. While the stink of burned hoof still filled the air, Swan put a gold ducat on the farrier’s anvil and got smiles from all the craftsmen.

‘Not like some bastards we serve here,’ the farrier said. He grinned. ‘Saint Maurice bless you, Englishman!’ His Italian dialect was difficult for Swan, but not so difficult that he couldn’t understand it. He said something else that Swan didn’t catch, and ordered one of his boys to attend Swan. There was an interesting kerfuffle – one of those moments Swan watched for, professionally – as it became clear that the directions confused the boy and confused the master smith too. Another runner was sent to the great hall, came back and whispered to the smith.

He raised an eyebrow. ‘Eh, messire,’ he said. ‘They send you to the barracks, not the hall.’ He shrugged, as if refusing to be involved in the obvious social slight.

Swan took a breath to push his anger down. ‘Bah! As long as the bed is dry,’ he said. Showing that a slight touched you – that was what your enemies wanted.

Swan followed the hunchbacked stable boy up a dozen curving flights of stairs to the tower that served as the barracks for the small army of retainers and mercenaries that Malatesta maintained. The tower had six floors and all six were packed to the rafters with men-at-arms in bunks and sitting at tables – gambling, praying, sleeping, fornicating – all of these activities in the stifling atmosphere of a closed drum tower. Swan chatted with the stable boy, who was silent like any adolescent for two flights of stairs and then finally laughed at Swan’s comments on the busy whores of the second deck.

‘They make much money here,’ the boy said. ‘And none of them will do me!’

Swan coughed. ‘It will only stunt your growth. Maybe worse,’ he said, feeling a hypocrite.

The boy stopped. ‘Stunt my growth?’ he blurted. He stood on the stairs, bent almost double, his back grotesquely out of balance.

Swan laughed. ‘It was a stupid thing to say,’ he allowed. ‘I apologise.’

The boy spat. ‘That was pretty,’ he said. ‘No gent ever apologised to me before.’

Swan shrugged. ‘Maybe you need to be funny with them.’

‘Try,’ Swan said. ‘I find women like humour in a man more than anything.’ He pointed up the steep steps. ‘Do the whores ever make it to the top?’ he asked.

The boy laughed. ‘Their purses are full by the second deck,’ he said. Purses was a nice double entendre. Both men cackled their laughter.

And Swan had recruited himself a low-level spy in the Rimini fortress.

Just as junior men got the upper bunks, so the top floor held the least important men-at-arms – some Burgundians, some Englishmen and two Albanians.

Peter was already stretched on a bunk, chatting in Dutch with a Burgundian in a scandalously short doublet and exaggerated hose. Antoine was laughing with a pair of French whores. They were talking about baking bread – perhaps as a metaphor and perhaps not.

Peter sat up. ‘I think they mean to insult you,’ he said.

Swan shrugged. ‘A bunk bed and a clean blanket?’ he said. ‘My ambitions are all satisfied.’

Peter indicated the lower bunk of the bed nearest the stairhead. ‘Yours, my lord,’ he said.

Swan shrugged at their bravado and their posturing. He surprised himself – he wasn’t interested in the offered quarrel, and he wondered whether he were losing his edge. ‘You a Londoner?’ he asked.

The man was struck dumb by Swan’s English. Then he managed a smile – it spread over his face so slowly that it looked as if it might hurt. ‘No, milord. York, or near enow.’

‘Ralph Bigelow,’ the English archer said. ‘Hey, Harry! Come here! Another Englishman, eh?’ He allowed his smile to stay. ‘You look familiar to me, milord. That is, Messire Swan.’

Swan’s status as an Englishman seemed to take away the sting of the loss of the best bed in the chamber, and the Englishmen sat together.

Swan had met Englishmen – at sea in the Ionian, and as pilgrims in Rome – but the archers were like the men with whom he’d grown up, and their conversation quickly turned to home.

‘Going to shit,’ was the verdict of the master archer, Bigelow. The man was a veteran – had served in a dozen wars. ‘We’re losing all of France. And now we’re like to start killing each other.’ He shrugged. ‘When I’m home, I admit it doesn’t look so mad, but when you are in Italy, the quarrel—’

The Englishmen all seemed to answer at once. Apparently, there was a dispute over the succession of the king.

Swan shrugged. He’d heard of it, but it sounded unlikely. Englishmen didn’t kill each other in civil wars – they let Frenchmen do that. ‘And what brings you gentlemen to sunny Italy?’ he asked.

Bigelow laughed. ‘Money!’ he said. ‘Surely this is the richest place on earth! And the one with the least fighting.’

‘And warm all the year,’ a blond man with a wicked scar said. He grinned. The scar made him look like Satan, but his laugh was clear and kind enough.

‘You call this warm, Will?’ asked another.

‘Sam Cressy,’ said the other. ‘Calais.’ His English had as much Dutch in it as Peter’s English.

‘Hugh Willoughby’ said the second blond boy. He was as tall as a mountain. ‘Kentishman.’

‘Harry Vintner. London.’ Vintner was old, and his nose said he spent far too much time on Italian wines, but he seemed to be Bigelow’s comrade. They sat together.

Cards were produced, and in an hour Swan had arranged to lose a ducat in gold to each man. But he learned a great deal – that their pay was far in arrears, and that they didn’t particularly like. . .