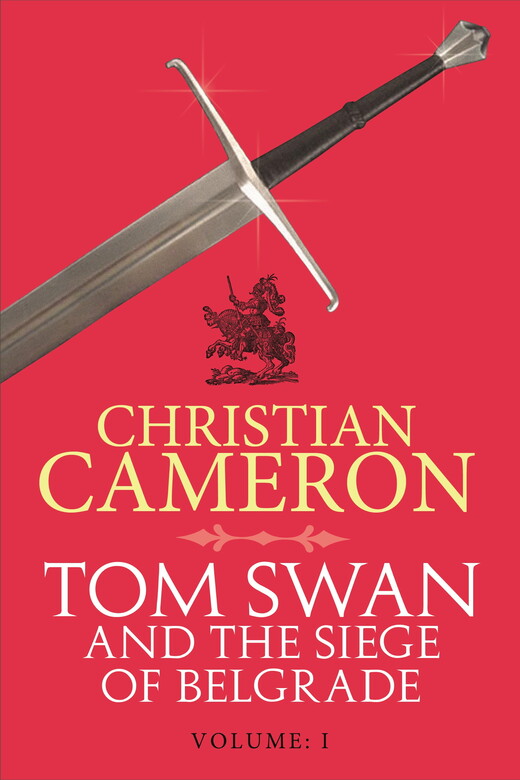 Swan awoke, hungry and tired. The muscles in the inside of his thighs ached, and those on the outside ached, too. The small of his back ached. His nose was cold and he huddled deeper into his blankets.

The smell of food, worming up from the cardinal’s kitchens, combined with the very urgent need to piss.

He threw back his blankets. In that moment, he thought, first, of Violetta, who had shared this very narrow bed with almost silent enthusiasm, and second, of standing on the night-time deck of a galia sotil1 of the Order, watching the stars, the ten thousand stars – and third, by some transference of the stars, to the feeling of dancing – dancing with forty other people, dancing beautifully, his whole body tuned to the music …

He pulled the blankets back over his naked shoulder and imagined Theodora’s body.

Kicked the blankets off and rolled to a seated position. And then, his thighs burning from twenty days in the saddle, he pushed himself to his feet to face another day.

A few minutes later, he was leaning against the great kitchen fireplace in his master’s kitchen. He had tall boots hurriedly laced to his small, tight doublet – and a plain brown gown hung on the back of the chair, matching the doublet’s severe brown. He had troubled to shave. His only apparent concession to worldly vanity was a red jewel that burned on his finger – a big garnet in a gold ring, deeply cut with an eight-pointed cross.

All the kitchen staff were men. Cardinal Bessarion disliked scandal, and some said he disliked women, as well, but be that as it might be, his house was staffed with men, from the gnarled hands of the veteran cook, Alceste, a Catalan, to the phalanx of pretty pageboys who served the cardinal’s food. They weren’t doing much. The whole palace seemed empty.

Alceste was overseeing the creation of a set of game pies. But he liked Swan, and his affection showed in an apple tart that a grinning boy brought the Englishman with a steaming cup of hippocras. Swan wolfed it down, his thoughts clearly elsewhere, and the cook cursed.

‘My food not good enough for my lord?’ he said.

Swan snapped back into focus – giving offence to any cook was foolish, let alone the one who ruled your own kitchen. He bowed – much the same bow he would have made to the cardinal on a formal occasion. Back straight, he sank on one knee with his right hand crushed to his heart.

‘Oh, most illustrious prince of apple-tart bakers,’ he began.

‘Flatterer,’ the cook spat. ‘You do not even notice my apple tart. You inhaled it without so much as a sign of delight.’

‘My senses were ravished …’ Swan began.

The cook rolled his eyes.

Swan sighed. ‘I’ve been on the road three weeks, illustrious Alceste. All the way to Vienna and back.’ He might have said again. He’d been to Vienna too often, this last winter. He’d also failed to get to Vienna, not once but twice, snowed into Alpine passes or marooned by choked rivers and collapsed bridges.

The cook, unimpressed by his sufferings, sniffed as if there was something in the kitchen that was slightly rotten.

Swan leaned towards the older man. ‘I’ve been hungry since I left,’ he said, with perfect honesty.

Maestro Alceste’s ill-humour – assumed only to wrench a compliment from his favourite courier – vanished. ‘Hungry? No one in my kitchen is ever allowed to be hungry!’ he said.

Boys ran in every direction. ‘His Excellency gave a dinner for ten cardinals,’ he said. He named dishes – peacock, roast boar, lamb in a sauce …

Wine – two Venetian bottles, each three-quarters empty. Swan produced his own glass – like most gentlemen, he carried a glass in a small leather box in his travel case. While he was savouring the sort of wine that princes of the Church drank, the bells rang for ten o’clock in the morning, and the high, clear sound of mass could be heard beginning at the church of St Cesaro across the courtyard.

Peter, his ‘servant’, lurched into the kitchen. Unlike the other servants of the cardinal’s men, Peter had his own quarters, his own watchword, and was sometimes sent on errands himself. He was Dutch, tall and thin, a master archer. He, too, had just ridden to Vienna and returned. So had Antoine, a Frenchman who mixed the arts of cookery with the arts of the sword. Antoine was greeted as a returning hero – a family member – and much embraced.

Peter walked as if his knees were locked, but he made it to the long bench at the servant’s trestle table and collapsed on to it. Antoine moved from hug to hug and plopped down next to the Dutchman.

Swan slid his own wine glass under Peter’s reaching hand. The Dutchman emptied the glass and scooped a slice of lamb – a beautiful, fresh, succulent young lamb, but several days old. He ate it, and another, and another …

The three men sat and ate.

Maestro Alceste watched them benevolently. He liked men who would actually eat. Too many of his guests were the merest gourmands – a few were outright sinners, at least against food. But these three always ate – well. Nor was Antoine above helping out.

‘Ten cardinals?’ Swan asked around a huge mouthful of bread and wild boar. ‘Vrstmth?’ – the last being a meaningless set of syllables that emerged from his full mouth. He meant ‘Really?’

Alceste laughed. ‘You two know that the Pope is dead?’

‘He was sick. Our Excellency called to him the good princes of the Church, and they dined together and discussed who is to be the next Holy Father.’

‘I wrote down everything they said,’ piped in a cherubic little boy with bright blond curls. ‘Messire Alessandro told me to!’

Peter grumbled in his throat.

Swan raised his eyes. ‘Who’s the next Pope, then?’ he asked.

Alceste shrugged. ‘Our master,’ he said.

Peter grunted and reached for another piece of lamb.

‘Where is everyone?’ Swan asked.

Alceste looked at him as if he were a particularly inept serving boy. ‘The cardinal is in convocation,’ he said.

Swan looked at Peter, and they both sighed.

Swan cooled his heels outside the cardinal’s officer for an hour. He had looked for the cardinal’s secretary; for Alessandro di Bracchio, the cardinal’s head of intelligence and Swan’s own officer; for Giannis or any of the cardinal’s Greeks. The feeling of being alone in the palace pressed on him.

Eventually, he pushed into the cardinal’s study and left the treaty – the document he had been sent to the Imperial Court at Vienna to procure – on the desk.

Peter waited in the doorway. ‘Ve are not velcome here,’ he said simply.

Indeed, the whole study seemed alchemical – there were skulls, and books, and scrolls, but if the cardinal were conjur. . .