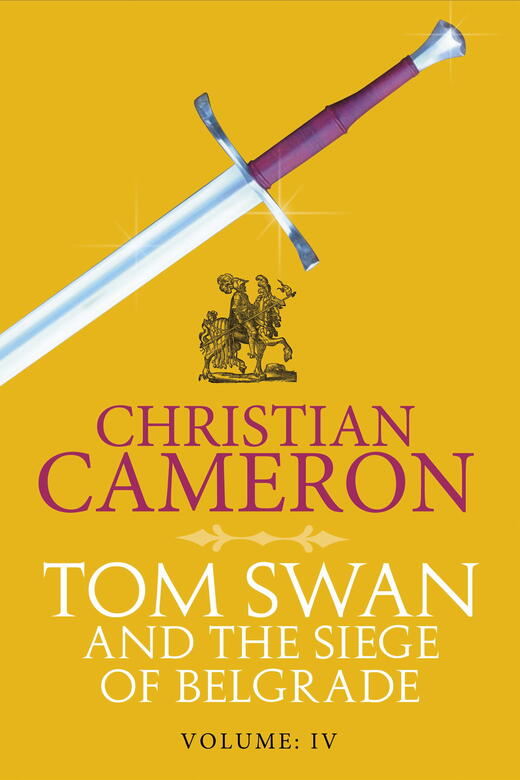 The May sun was warming the plains of Terra Firma behind them, and in the Venetian lagoon, the heat was already rising and the city stank of dead fish. But in the high alpine passes that led north from the Serenissima and her inland empire to Udine and farther north to Austria, the snow still stuck, and the wind blowing through Thomas Swan’s magnificent, heavy green wool cloak might have frozen a man to death in minutes. Swan’s hands were covered by heavy deer hide gauntlets over thin chamois swordsman’s gloves and still his hands were leaden and cold, and his left hand ached every time he flexed his fingers – which he now did, repeatedly, as if the pain in the palm of his hands gave him some perverse pleasure.

Despite which, he had only to look back over his column to have a smile as broad as a ship’s stern break over his face. Behind him jingled a column of men-at-arms, almost forty lances in Milan’s best plate armour; thirty-eight fully armoured men-at-arms, thirty-eight armoured squires, and thirty-eight lightly armoured crossbowmen who nonetheless, because Italian notions of ‘light armour’ were as catholic as their views on the divinity, included mail shirts and steel breasts and backs, burgonets or simple open-faced sallets or old bassinets recut. They rode good horses – better horses than those on which many of them had entered Venice.

Behind them rode six well-mounted English archers, and ahead of the column somewhere were a dozen Greek – or Vlach or Albanian – stradiotes, ‘light cavalry’ with bows and sabres – and mail shirts and steel cuirasses. It was, in fact, a small army, and it was all Thomas Swan’s.

He looked at his pennon, fluttering in the icy wind next to that of his master, Cardinal Bessarion, and his grin all but hurt his face. It certainly banished the pain in his left hand and the knowledge that he couldn’t move two of the middle fingers very much and had begun to fear that their tendons were cut for ever.

He rode back along his column, where Ser Columbino, still recovering from his wounds, saluted him with a smile. Columbino was now a proven man – and, increasingly, his lieutenant. Swan was modest enough to suspect that Columbino was a better officer than he himself – he never forgot details like straw and oats and horseshoe nails and he had already shown himself to know more about carts and wagon construction then Swan ever hoped to know.

Farther back, Swan passed Di Vecchio – an ageing man-at-arms of fifty or more. He didn’t grin, he didn’t look pleased, and when Swan nodded cheerfully, Di Vecchio returned merely a civil nod. Di Vecchio and his lances – twenty-eight of them – had in fact fought against Swan and Columbino in the darkened streets of Venice. They had lost.

Swan had, in fact, saved them all from the headsman’s axe. Despite which, there was not a smile from the rest of the Malatesta men-at-arms. Swan’s eye passed over the unhappy faces – bitter or merely cold – and looked at a hundred other details he’d learned from the Knights of St John or from Peter his master-archer-cum-servant or from Ser Columbino or from Alessandro, now Lord Bembo of Venice.

Buckles were one of his measures of professional competence. Buckles took time and effort to do up, and slovenly soldiers left two-thirds of them unbuckled. With new leathers this could be done, but the weight of, say, a breastplate would very quickly stretch and then break a strap – or put weight on things like canteen straps or sword belts.

In Venice, they could be replaced in an hour.

In the middle of an Alpine pass, a single broken strap could cost a hundred and fifty men time – ten minutes or so, perhaps, while something was found to replace the strap.

Swan thought of Xenophon. One of the ancient general’s many pieces of advice on making war was ‘take many spare leather straps’. It was the sort of detail that made Swan love old Xenophon, despite the man’s innate aristocratic assumptions. At least he’d ‘been there’.

The man he wanted rode by without even glancing at him. He was a squire or a man-at-arms – a handsome Umbrian lad wearing a good harness of Milan’s best. He had the new, exaggerated pauldrons and the new wings on his knees that protected the back of the knee.

But his harness sounded like a tinker’s cart, and he looked wrong. It was difficult to define, but his middle was too big and his shoulders weren’t on well and he didn’t have his surcoat done up. He looked slovenly.

Swan was conscious of his failure to know the man’s name. This was exactly why the gentry of the Order made their volunteers learn the name of every mercenary under their command, and he cursed his failing as the man rode smugly on. There wasn’t room on the narrow road to follow him.

Swan had a good head for arms and weapons, however. And faces.

By the time the whole column was past him he’d noted a dozen discrepancies he didn’t like. He paused at the rearguard to accept Bigelow’s salute. The English, despite their reputation as barbarians, had an easy notion of discipline that Swan shared – there were times to play the game, and times to share a beer. Bigelow seemed to know this instinctively – that the former Malatesta men-at-arms were, in effect, hostile, and hence some signs of military bearing were required.

It was all very complicated, the whole process of command.

At the next wagon turn, where the trail broadened, Swan cantered back along the column, now ignoring Di Vecchio’s men to ride back to his rightful place at the head of the column. There, the leader of the stradiotes, Constantine Paleologus Grazias, distant relation of the now-dead emperor, exile and new Venetian, awaited him, his heavy wool kaftan buttoned and tied from waist to neck and his broad felt hat pulled well down over his eyes.

‘Ser Thomas.’ Grazias grinned. Swan’s knighthood was so new that he still smiled every time his title was used, like a new bride, and Grazias seemed one of those me. . .