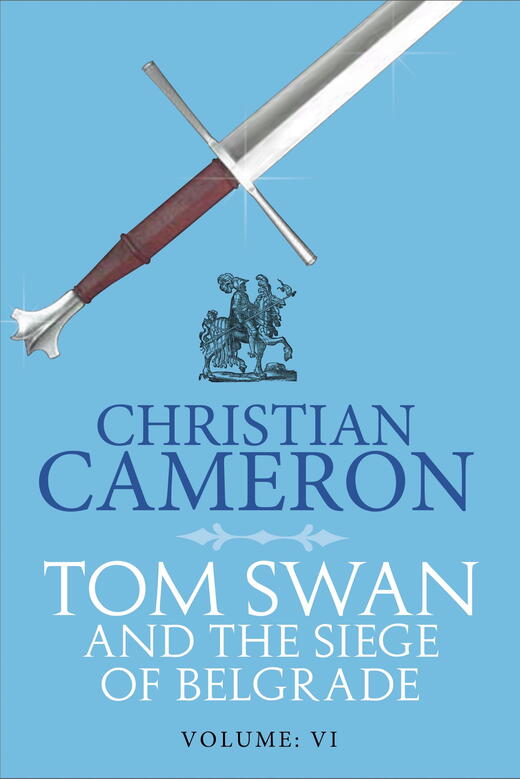 Fifteenth Century Europe. Tom Swan is not a professional soldier. He's really a merchant and a scholar looking for remnants of Ancient Greece and Rome - temples, graves, pottery, fabulous animals, unicorn horns. But he also has a real talent for ending up in the midst of violence when he didn't mean to. Having used his wits to escape execution, he begins a series of adventures that take him to street duels in Italy, meetings with remarkable men - from Leonardo Da Vinci to Vlad Dracula - and from the intrigues of the War of the Roses to the fall of Constantinople.

The sun beat down like a hammer on an anvil, and the metaphor was the more apt because Thomas Swan, knight of Venice and donat of the Order of St John Hospitallers, had a severe hangover. The hangover alone might not have been so bad except for the exceptional heat, the merciless sun – and the steady, arrhythmic beat of a blacksmith forging iron nails just outside Swan’s tent. The tent resembled a tall bake-oven with white sides.

Swan’s partner in excess had left him before first light. One of his ears had a bite mark on it, and there was a surprising amount of blood on his bedlinen.

On his waist, just under his left hip, there was a black bruise the length of his hand and no wider than a finger, where a Turkish blade had not penetrated his mail. The pain of that bruise and the dull ache in his hips reminded him – unpleasantly – that there were worse situations available to him than a hangover on a hot summer morning.

He paused long enough to manage a prayer.

He got his feet on the ground. There was a fine layer of dust over everything – every horseman going through the camp, every troop of halberdiers practising drill, every team of oxen moving lumber, raised the dust, and it sifted through everything.

Swan got to his feet with some trouble and rolled his shoulders – and cursed. He picked up a small cotton towel – Turkish – which he’d carried now for over a year. He looked at it fondly and wondered why, exactly, he’d taken to fighting the Turks. He wondered whether Khatun Bengül had accompanied her father to war. He thought it unlikely. Military camps were bad places for women.

He would turn twenty-three in the next few days. But when he tried to reckon, he was unsure of the date. Was June over?

He sighed, pulled on his Turkish kaftan, and walked out, barefoot, into the dusty streets of Hunyadi’s earthwork fortress of Kovin. As he walked, Swan had an easy time imagining the place as a Roman military camp as described by Vegetius – it was laid out in much the same way, and had earthwork walls with small bastions and gun platforms. Hunyadi’s money and a workforce of thousands of local peasants had constructed the fortress over the last few weeks. It smelled of new earth.

Swan walked down towards the river, which, if not as broad as the sea, was broader here than the Grand Canal in Venice. He passed the Orthodox chapel built of new wood and the Catholic church, also built of wood, and then passed the rows of wagons parked in their own section of camp, all en route to the boatyard along the river.

It was early, and Swan’s head was throbbing, but the river was beautiful and the blacksmith was now far enough away that the tink tink tink of his work was less a menace and more like music.

There were two flat-bottomed boats under construction. A dozen men, all middle aged, stood around one of them while two more used a pit-saw to make planks. They ignored Swan, and Swan was happy to ignore them. He passed a row of guns – mostly iron, but a few bronze, all sizes – and then slipped out through the beachside sally port with a nod to the sentry, who paid him no heed whatsoever.

Swan walked upriver fifty paces. Three other men were bathing, where a hale old tree stood out over the water.

Swan dropped his kaftan and leaped into the water as the three men began shouting.

It was among the stupider things he’d ever done.

The water was deep – so deep that he was instantly swept away by the current. He fought panic, swallowed river water, got his head up – and caught a spear-haft extended out over the water.

Sputtering thanks, he was hauled ashore at the end of a sixteen-foot Swiss pike. Even so, he was already weak, and it took him time to get up the bank, which was uncomfortably steep.

The three men clucked and got him up the bank.

‘There is a current!’ one said, in Hungarian. In fact, Swan didn’t know the word for current, but he got it quickly enough.

One of the men had a loaf of bread, and he gave Swan some, and the four men sat for a moment.

Swan noted that his hangover was gone.

He swam more carefully from the old tree, as the Hungarians directed him, dried himself, feeling much better, and walked back. He was clean for the first time in days, and he took an opportunity to take hot water from Willoughby’s fire.

The older Englishman was lying by the fire, playing with it, when Swan returned to shave. The Englishmen had acquired a trio of young women – sturdy, pretty in a country way, and clearly ready to work.

The language barrier was obvious – Willoughby was attempting to explain to a Hungarian farm-girl how to maintain a constant temperature with a wood fire. She not only didn’t understand – she didn’t care.

Willoughby looked at Swan in desperation. ‘We’ve got bacon!’ he said, as if this explained everything. ‘That fire will burn it to a crisp!’

At the word ‘bacon’ Swan’s mouth began to water. He turned to the girl.

‘What’s your name, my sweet?’ he asked, in passable Hungarian.

She frowned. ‘Maria,’ she said, as if this might be too much of a concession.

‘My friend wants you to understand,’ he began.

The woman walked off. She wasn’t being especially rude. She came back with an armload of firewood.

Swan shrugged. ‘I think you’d best cook your own bacon,’ he admitted. ‘In which case, I’ll take some.’

‘I cook,’ the woman said in recognisable English. She put her hands on her hips. ‘Where?’

Swan switched to Hungarian. ‘My friend says the fire is too hot for his bacon.’

The young Hungarian woman laughed. ‘What does a man know about cooking anything?’ she asked.

Swan passed on her observation.

Will Kendal appeared. ‘Tell the miss I’ve cooked me own bacon since I wore hose an’ shit brown,’ he said.

On translation, she rolled her eyes.

Swan retreated before the situation led to violence and began to shave in the shade of ‘his’ wagon, a wagon he shared, by arrangement, with the archers. He had a nail pounded into the wagon body at head height, and he hung his round bronze mirror on that nail, opened his brass-handled razor, and began to work away at the eight-day-old hairs on his face.

His water was cooling faster than was fair, given that he was already sweating. But Mercia, his page, appeared with fresh, new-boiled water. ‘Šárka send this,’ he said.

Radu appeared with a plate of bacon. He said nothing and his bow was ridiculously low. Swan didn’t care.

He rinsed his razor and made the bacon vanish so fast he could barely really enjoy it. There were five pieces, and he was aware that the other archers probably only had three. He ate them all anyway.

Mercia appeared round the big wheel and handed him a steaming cup of hot hippocras, full of honey. Swan didn’t want it, but it proved, as it always did, to go very well with bacon.

He rinsed his sticky fingers in his soapy shaving water and towelled himself off. Then he threw his kaftan over his shoulders and slipped through the English camp, responding to various ‘Hallos!’ and ‘Good days!’ and ‘Sele of the day to thee, Captain’s with appropriate responses. He made it to his tent without being caught by any of . . .