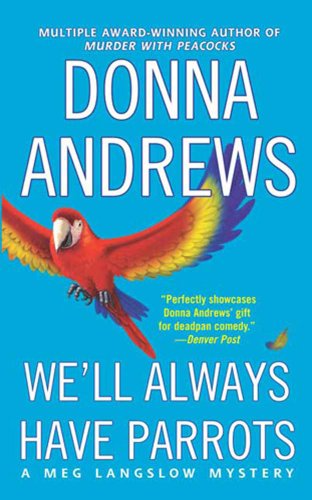 Parrots are flying loose all over a convention hotel, making trouble and imitating everything everyone says. Monkeys are swinging from chandelier to chandelier. Michael is a teacher moonlighting as an actor in the show Porfiria, Queen of the Jungle, and the cast, crew, and their exotic animal colleagues are performing at the hotel. Michael and his partner Meg have become part of the show's family-but as with most families, there's a member who's very difficult to like. QB, the actress playing Porfiria, is a true drama queen, with a drinking problem and a bad attitude. When Meg attempts to extract the recalcitrant QB from her dressing room, Meg finds her dead. Now Meg and Michael, despite the zany atmosphere, must solve the murder. 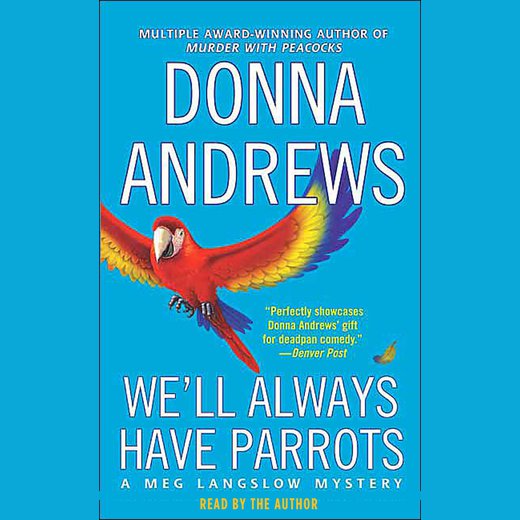 I woke up when Michael began screaming in the bathroom.

He probably couldn't hear me, given the volume of noise he was producing.

" Damn the man,'' I muttered, pulling the pillow over my head.

The racket from the bathroom changed to a loud gurgle, and while the hotel's meager pillow might be adequate for sleeping--just barely--it couldn't muffle the sounds of a classically trained stage actor, diligently performing his morning vocal exercises. And gargling repeatedly with a variety of concoctions, to counteract the effects of a bad head cold.

I'd have bet that the alternating doses of salt water, dissolved baby aspirin, and Listerine did more to irritate his throat than soothe it. But I knew better than to say so. In the several years we'd been together, I'd learned that things went more smoothly if I didn't try to argue with Michael about the various strange superstitions and crank health notions he shared with his theater friends.

I shoved the pillow aside, leaned over, and groped on the floor by the side of the bed until I found the program book I'd dropped there last night.

" Welcome to the Jungles of Amblyopia!'' proclaimed the headline. I paused to look at the group photo below. Michael looked dashing despite the corny costume--a black velvet wizard's robe, covered with phony magical symbols and allowed to fall open to show that he was shirtless beneath. Of course, maybe I was biased. Maybe to an unprejudiced eye Michael looked just as ill-at-ease as the rest of the cast of Porfiria, Queen of the Jungle--the low-budget TV show that had catapulted him to sudden cult fame.

And brought us to this rather run-down hotel in suburban Northern Virginia, where the Friends of Amblyopia--the show's fan club--had organized their first East Coast convention. For the next three days Michael and his co-stars would endure an endless round of panels, banquets, and autograph sessions.

He'd tried to weasel out of it by claiming a conflict with his other career--his real career--as a drama professor at a small but prestigious Virginia college. But unfortunately his contract required attending a certain number of publicity events for the show--and everyone had to be at this particular convention on direct orders from Tamerlaine Wynncliffe- Jones, the aging B-movie actress who played Queen Porfiria and, more to the point, owned the production company. Apparently attendance had been embarrassingly low the last time they'd held a convention with only the QB, as the cast and crew usually called her. To her face, people pretended that QB stood for "Queen Bee,'' but even she wasn't stupid enough to ignore the obvious, slightly longer alternative to the second word. Since she never objected to being called the QB, I suspected she secretly relished the substitution.

So it was really the QB's fault that Michael had awakened me this early. I liked that thought. Much more satisfactory to blame her for the loss of my beauty sleep.

I was already resigned to losing my identity for the weekend. Instead of Meg Langslow, blacksmith, I'd be Meg, she's-with-Michael. Meg, can-we-add-one-more-to-the-dinner- reservation. Meg, who should disappear gracefully when the swooning fans show up.

"It would be different if we were married,'' Michael said the last time we'd done one of these events. Reasons for tying the knot popped into our conversations with increasing frequency these days.

"True,'' I said. "But as a reason to commit matrimony, I'd put that only slightly above filing a joint tax return, and way below your offer to elope even if both mothers threw tantrums at being deprived of the wedding of the millennium.''

And even if being married would make it easier for the convention organizers to recall my existence, it wouldn't change the way Michael's more devoted female fans hated me. But at least if I got enough sleep to look my best, "If only she didn't exist!'' wouldn't automatically be followed by "What in the world does he see in her?''

I rubbed my eyes and flipped through the program to the Friday schedule. Aha. Michael had a 9 a.m. "spotlight''--a solo appearance on the main stage. Obviously he was in pre- performance mode. He'd spend an hour or so doing vocal exercises and another hour fussing with his hair and clothes. Normally this would leave him an hour to sit around making himself nervous, but I suspected today he'd spend that hour self-medicating for the cold. Applying nose drops and contemplating their effect. Sampling various cough lozenges. Dabbing lotion on the red, raw patches that appear on the cheeks and around the nostrils after several days of diligent nose-blowing.

Poor Michael. I could hear him cough--or was it only another vocal exercise? I made a mental note to see that he spent as much time as possible breathing on the QB. After all, thanks to her insistence that he attend, dozens of fans would probably go home with Michael's cold.

Some of them already had it, apparently. I heard a muffled sneeze from the balcony. I got out of bed and peered out through a tiny crack in the curtains. Yes, the fans were still there. They had figured out who was in what room shortly after the celebrity guests arrived, and had learned that if they could get up enough nerve to cross the two-foot gap that separated the various balconies, they could roam at will up and down the outside of the hotel and camp on the stars' balconies. We were only on the second floor, which meant that so far the ones who fell hadn't badly injured themselves, and obviously neither hotel management nor the convention organizers would do anything. Despite my calls to both the previous evening, the crowd on our balcony had grown overnight. Presumably they'd disperse when the panels began and they had a legitimate chance to see their idols.

I wondered what they thought of Michael's vocal exercises. Surely they could hear them. I also wondered, uncharitably, whether anybody was camped on the QB's balcony, next to ours. I'd bet not, but since I didn't dare go out to peek, I'd never know. I took a perverse pride in the fact that our balcony was brim full of bodies. I almost felt sorry for them-- the weather had turned damp and uncomfortably cool in the night, and since the hotel only had two stories, the balcony had no roof to shelter them from the steady drizzle. They huddled together, wet and bedraggled, like a crowd of refugees.

Of course, my sympathy wasn't profound enough that I felt obliged to play Lady Bountiful, and make coffee for them in the room's minuscule coffee machine. After all, no one had forced them to sleep on our balcony, and they'd dry off quickly enough when the August sun came out.

I brewed some coffee for the two of us instead, and sat in the room's easy chair, studying the program while I sipped and waited for the caffeine to take effect. It wasn't working rapidly. Even the arrival of room service with breakfast didn't rouse me from my torpor. By the time Michael finished his vocal exercises and began rummaging through his suitcases, I found myself drifting off. Maybe I should just slip back in bed for a few more winks until--

I heard another shriek. Why had Michael started his vocal exercises again?

I opened my eyes and glared at the bathroom door.

Then blinked in surprise. Michael stood in front of the dresser, looking toward the closed bathroom door with obvious alarm.