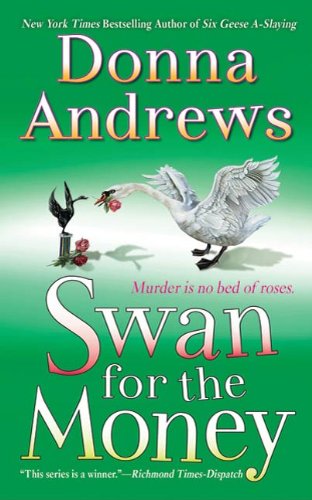 Meg Langslow's eccentric parents have a new hobby: growing roses and entering them in highly competitive shows. Dad's gardening skill and Mother's gift for selecting and arranging the blossoms should make them an unbeatable team?and Meg is relieved they've taken up such a safe, gentle hobby. She even volunteers to help when the Caerphilly Garden Club sponsors its first annual rose show. But after a few hours of dealing with her parents' competitors, Meg sees trouble... Rose growers are so cutthroat that they will do nearly anything to win the Black Swan trophy - making them all prime suspects when Meg discovers that someone is attempting to kill the wealthy woman on whose estate the competition is being held. Meg tries to leave the detecting to the local police and focus on the competition, but she just can't help getting her hands dirty when lives are at stake... 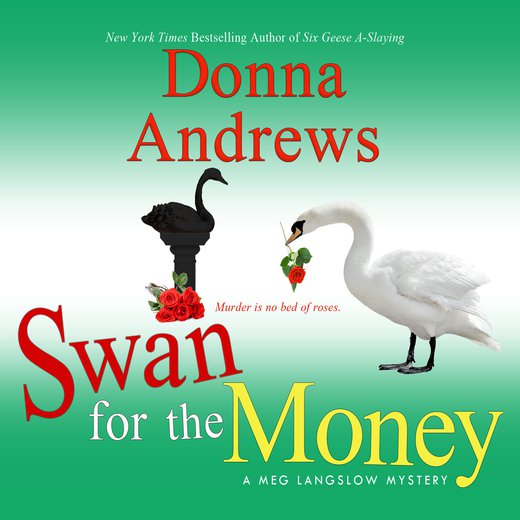 He collapsed into a chair at the foot of the breakfast table, as if no longer able to bear the weight of his dire tidings, and wiped his balding head with a pocket handkerchief. The head, the handkerchief, the hand holding it, and nearly every stitch of his clothing were so encrusted with mud and garden dirt that Mother would probably have ordered him off to take a shower immediately if she weren't so visibly curious to hear his news.

"Yes?" she said, one hand clutching her throat in a gesture that would have looked artificial and old-fashioned on anyone else. On her it merely looked elegant.

"Oh, no!" she exclaimed. From her expression, I could tell that she found this news genuinely heartbreaking.

Faint murmurs of sympathy arose from the dozen assorted friends and relatives seated around the table, but I could tell from their uniformly puzzled faces that they were all mentally asking the same question I was: who the heck was Matilda?

We used to have a Matilda in the clan, my Great Aunt Matilda. But she'd been dead for years, and I couldn't recall anyone else gracing a recent arrival to the family with such an unusual name. Nor could I remember any friends or neighbors named Matilda. There was a time when I would have assumed Matilda was one of Dad's patients, but he was semi-retired now, and his medical practice consisted mostly of those same family, friends, and neighbors, whose names I would recognize. Not a Matilda in the bunch.

"And what's more," Dad went on, sitting up and frowning fiercely, "it was foul play. No question. I only suspected it with Adelaide, but I'm sure of it now."

"It's the Pruitts," Mother said. "I've suspected them all along." Not surprising. The Pruitts were an old local family who used to own most of Caerphilly County and often behaved as if they still did. Most locals were quick to blame the Pruitts whenever anything sneaky or underhanded took place. Mother and Dad only spent weekends here in Caerphilly, in the old farm house they'd dubbed their summer cottage, but they were quickly picking up many local attitudes.

"You suspect the Pruitts of two murders?" my brother, Rob, asked. "Have you told the police?"

"This Matilda and Adelaide you're talking about," Rob said.

Dad burst into laughter. I suddenly realized what he'd been talking about.

"It's not murder," I said. "Because Matilda and Adelaide aren't people, are they? They're roses."

"Meg's right, of course," Mother said, sounding slightly cross, as if baffled at how long it took us to figure this out.

"Sheesh." Rob returned to his food. "Roses. That's all we talk about these days."

"Now you know how I feel," I muttered, though not loud enough for anyone but Michael to hear. For the last two months, ever since Mother recruited me to organize the Caerphilly Garden Club's annual rose show, roses had taken over my life. Normally I'd be asleep at this hour, not trekking to my parents' farm to collect boxes of rose show equipment and haul them to the farm whose owner, Mrs. Winkleson, was hosting tomorrow's show. And normally the gala breakfast might have made up for the early hour, but today my stomach was wound too tight to enjoy it.

"Can't we talk about something else for a change?" Rob was saying.

"Peonies, for example," my husband, Michael, said. "Much more practical for our yard. They don't require a lot of cosseting, like roses, and the deer don't seem to eat them."

I could tell from Rob's face that he didn't consider peonies a conversational improvement over roses, and Mother and Dad ignored the interruption.

"Meg," Mother said to me. "Your father needs coffee." She managed to give the impression that only with an instant infusion of caffeine could Dad possibly survive this new horticultural tragedy.

"I could use some, too," Michael said, and shot out to the kitchen before I could even push my chair back.

"Matilda and Adelaide were two of my most promising black roses," Dad said to the rest of the table.

"And two of our best chances for winning the Winkleson Trophy," Mother said. "Which will be given out this weekend at the Caerphilly Rose Show to the darkest rose," she added, on the off chance that any of the assembled relatives had managed to escape hearing about the Langslow house hold's new hobby of breeding and showing roses.

"Is there a big prize?" Rob asked.

"No money involved," I said. "Just the thrill of winning."

"Big thrill," Rob said, through a mouthful of scrambled eggs.

"And a trophy," Mother added. "Quite possibly a lovely engraved Waterford bowl. That's what I suggested." Yes, that sounded like Mother's kind of suggestion. She was a confirmed human magpie, easily seduced by anything that glittered, and a sucker for anything that had ever come out of the Waterford factory.

"Well, if the winning rose is bred by the exhibitor, there's always a remote possibility that a commercial rose company might want to buy it," Dad said. "Of course, that would only happen if it were a significant advance toward the creation of a truly black rose. All the big commercial breeders have their own black rose breeding programs."

"And ridiculous programs to begin with," put in my grandfather. "A genuinely black rose is a scientific impossibility."

"Oh, I hope not," put in my cousin Rose Noire, née Rosemary Keenan, to those who had known her before she'd become a purveyor of all-natural cosmetics and perfumes and adopted a name to match. "I do hope one day to greet one of my namesakes!"

She probably would. Talking to plants wasn't even unusual in my family. Although Rose Noire was one of the few who expected the plants to answer.

"Useless things, roses," my grandfather said. "Had all the vitality bred out of them, so the poor things can barely survive without massive applications of chemicals all the time. Environmentally unsound." A typical reaction from my grandfather, Dr. Montgomery Blake, the world famous zoologist and environmental activist. Of course, he could merely be vexed that Dad's rose growing was preventing him from working full-time on the Blake Foundation's latest animal welfare campaigns, whatever they were.

"Getting back to Matilda and Deirdre—" I said.

"Sorry," I said. "It's no wonder I didn't recognize the names— last time I got an update on your rose-breeding program, you were just referring to them by numbers."

"Don't you mean deflowering?" Rob asked, with a snigger.

"How can you expect a living creature to thrive when all it has is a number, not a name?" Rose Noire went on.

"That's why we decided to name them," Mother said.

"But we're going to name them all after family members," Mother said.

"No shortage of names there," Dr. Blake muttered. He was still getting used to the fact that when he claimed Dad as his long-lost son, he'd found himself allied by marriage with Mother's family, the Hollingsworths, whose numbers exceeded the population of some small countries.

"I hope you stick to dead relatives," Michael said, as he emerged from the kitchen with a pot of coffee. "Otherwise we'll have no end of confusion. And imagine if it got around the county that Rose Noire was suffering from black spot disease, or that Rob had thrips."

"Getting back to Matilda and Adelaide," I repeated, "what happened to them, and what makes you think it was foul play?"

"They were eaten," Dad said. "Undoubtedly by marauding deer. And I found this in some bushes nearby."

He held up a small brown glass bottle with a neatly printed label proclaiming that it contained "100 percent Doe Urine."

"Someone obviously sprinkled this near Matilda," Dad said. He tried to pocket the bottle discreetly, out of deference to Mother's sensibilities, but Dr. Blake held out his hand for it. "In fact, they probably sprinkled the stuff in a path leading from the woods straight to Matilda."

"Yuck," Rob said, making a face. "If I were a deer, I'd steer clear of roses some other deer had already peed on."

"But you're not a deer," my grandfather said. "To a deer, especially a male, doe urine would be an irresistible lure. Hunters have used deer urine for centuries to cover up their human scent and attract deer to their hunting areas. It's particularly effective if the urine is—"

"Dr. Blake!" Mother exclaimed. I wasn't sure whether she was objecting to his words or to the fact that he had opened the bottle and was sniffing it curiously.

"So hunters use the stuff," I said. "You're sure that bottle wasn't just discarded by some passing hunters?"

"We hadn't given anyone permission to hunt our land," Mother said.

It took a few seconds for the grammatical implications to sink in— the fact that she said "hadn't" rather than "haven't." Did her use of the pluperfect tense mean that now, after Matilda's demise, they had given hunting rights to someone? But by the time that thought struck me, Mother and Dad were deep in a discussion of which surviving black roses were likely to produce a prize-worthy bloom by Saturday's contest. Everybody else appeared to be listening attentively, or as attentively as possible while consuming vast quantities of bacon, sausage, country ham, French toast, waffles, pancakes, cinnamon toast, croissants, and fresh fruit. Were the rest of the family really that interested in rose culture, or did they just figure they'd better come up to speed on the subject in self defense?

He gestured to my grandfather, who ceremoniously handed me the empty doe urine bottle.

"Yuck," I said, dropping the thing on the table. I wasn't normally squeamish, but my stomach rose at the thought of the little bottle's former contents. "What in the world to you expect me to do with it?"

"Find out who used it on Matilda," Dad said. "And help me figure out how to stop it. I'm counting on you!"

Excerpted from Swan for the Money by Donna Andrews.
Copyright 2009 by Donna Andrews.
Published in August 2009 by Minotaur Books.
All rights reserved. This work is protected under copyright laws and reproduction is strictly prohibited. Permission to reproduce the material in any manner or medium must be secured from the Publisher.