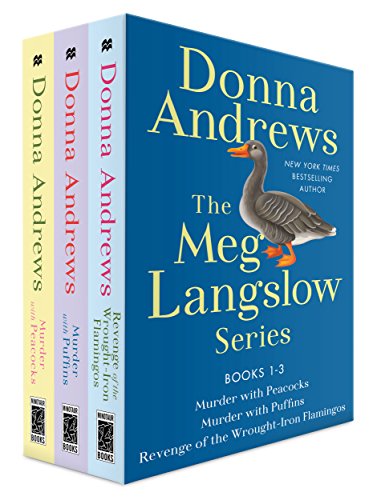 Bestselling author Donna Andrews combines murder and madcap hilarity with a cast of eccentric oddballs in a small southern town. Here together for the first time in a fabulous eBook bundle are books 1-3 in the Meg Langslow series:

Murder with Peacocks
Down in her small Virginia hometown, Meg Langslow is the maid of honor at the for three of her loved ones--each of whom has dumped the planning in her capable hands. In a whirl of summer parties and picnics, Southern hospitality is strained to the limit by an offensive newcomer who hints at skeletons in the guests' closets. But it seems this lady has offended one too many when she's found dead in suspicious circumstances, followed by a string of accidents--some fatal. Soon, level-headed Meg's to-do list extends from flower arrangements and bridal registries to catching a killer--before the next catered event is her own funeral...

Murder with Puffins
In an attempt to get away from her family, Meg and her boyfriend go to a tiny island off the coast of Maine. What could have been a romantic getaway slowly turns into disaster. Once there, they are marooned by a hurricane and that is only the beginning of their problems. Meg and her boyfriend arrive at the house only to discover that Meg's parents and siblings, along with their spouses are all there. When a murder takes place, Meg realizes that she and her boyfriend can no longer sit by a cozy fireplace, but must instead tramp around the muddy island to keep try and clear her father who is the chief suspect.

Revenge of the Wrought Iron Flamingos
Every year, Yorktown, Virginia, relives its role in the Revolutionary War by celebrating the anniversary of the British surrender in 1781. This year, plans include a re-enactment of the original battle and a colonial craft fair. Meg is trying to keep her father from scaring too many tourists with his impersonation of an 18th century physician. And to prevent a snooping reporter from publishing any stories about local scandals. Not to mention saving her naive brother, Rob, from the clutches of a con man who might steal the computer game he has invented. It's a tough job--at least, until the swindler is found dead, slain in Meg's booth with one of her own wrought-iron creations. Now Meg must add another item to her already lengthy to do list: "Don't forget to solve the murder!"