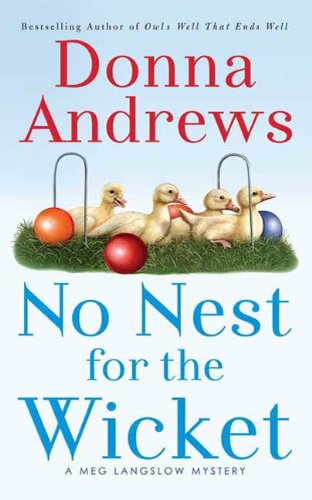 The hilly terrain next to the old Sprocket house that Meg Langslow and her fiance, Michael, are refurbishing is the perfect location for an extreme croquet field - even the legs of cows and sheep are convenient extra wickets. Croquet has become all the rage in Caerphilly...until it appears someone in town has taken the rage a bit too literally. While stumbling down a steep bank after her ball, Meg encounters the body of a fresh female corpse with a mallet-sized dent in her head. If that isn't reason enough to call a time-out, it turns out that Michael knew the woman from years before. Ever curious, Meg decides that playing arm-chair sleuth is far more important than working on her game. 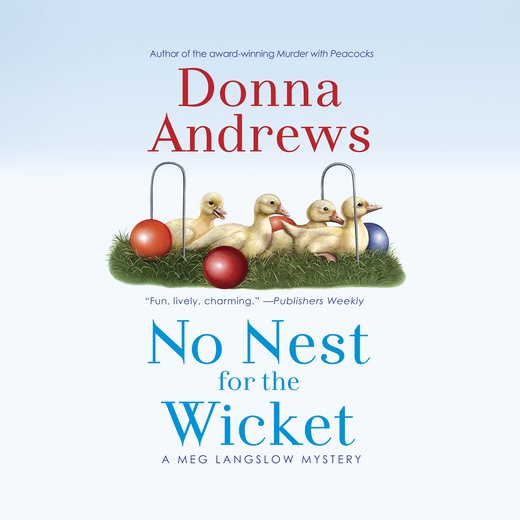 The cow chewed her cud and gazed at me with placid bovine calm.

"Go away!" I ran toward her, waving my arms wildly, only to pull up short before I ran into her. She was bigger than I was. Half a ton at least. Maybe three-quarters.

I turned my croquet mallet around and prodded her black-and-white flank with the handle. Not hard—I didn't want to hurt her; I just wanted her to move.

She turned her head slightly to see what I was doing.

I prodded harder. She watched with mild interest.

Of course, those words held no menace for her. Mr. Shiffley, her owner, was a dairy farmer.

I walked a few yards away, feet squelching in the mud. I could see why the cow insisted on lounging where she was. The evergreen tree overhead protected her from the March drizzle, and she'd claimed the only high ground in sight.

I glanced down. My croquet ball was sinking into the mud. Did the rules of eXtreme croquet allow me to pull it out? Probably not.

The little two-way radio in my pocket crackled.

"Roger," I said. The cow still lay in front of—or possibly on—the wicket, but I had to move before the mud ate my ball. Didn't mud that ate things count as quicksand? I set down the radio and whacked my ball. It bounced off the cow's flank. She didn't seem to mind. She had closed her eyes and was chewing more slowly, with an expression of vacuous ecstasy.

"Done," I said, grabbing the radio before it sank. "I need a cow removal here at wicket nine."

"Which one is that?" Rob asked.

"The one just beside the brier patch. Near the steep hill with the icy stream at the bottom."

I pocketed the radio and smiled menacingly at

I leaned against a tree and waited. The radio crackled occasionally as Rob notified the scattered players of their turns and they reported when they'd finished.

In the distance, I heard a high-pitched cackle of laughter, which meant my team captain, Mrs. Fenniman, had made a difficult shot. Or, more likely, had just roqueted some unlucky opponent, which she told me was the technical term for whacking someone's ball into the next county. Annoying in any croquet game, but downright maddening in eXtreme croquet, where the whole point was to make the playing field as rugged as possible. On this field, being roqueted could mean half an hour's detour through even boggier portions of the cow pasture.

I pulled the cell phone out of my other pocket. Time to see what was happening back at the house—the construction site that would eventually be a house again, if all went well. Today we'd begun demolition of the unrepairable parts, and it was driving me crazy, not being there. I'd left detailed instructions with the workmen, but I didn't have much confidence that they'd follow them. They were all Shiffleys, nephews of Mr. Shiffley the dairy farmer. Everyone in Caerphilly knew that if you wanted some manual labor done, you hired a Shiffley or two—or a dozen, if you liked; there was never a shortage. They were cheerful, honest, hardworking, and reliable, as long as you didn't need anything done during hunting season.

Everyone in Caerphilly also knew that when you had Shiffleys on the job, you needed someone else in charge. Not that they were stupid—some were and some weren't, same as any other family—but they were stubborn and opinionated, every one of them, and you needed someone equally stubborn and opinionated telling them what to do. Me, for instance. Not only was I stubborn enough but, thanks to my work as a blacksmith, they halfway respected my opinions about related crafts like carpentry and plumbing. Michael, my fiancé, would do in a pinch, as long as he remembered to suppress his innate niceness. Unfortunately, Michael was in town, attending the dreaded all-day Caerphilly College faculty meeting. We had Dad in charge. I was worried.

"Come on, Dad, pick up," I muttered as his phone rang on unanswered. I heard rustling in the shrubbery—either another competitor approaching or Rob arriving for cow removal. Either would cut short my time for talking.

"Meg!" Dad exclaimed when he finally answered. "How's the game?"

"I'm stuck in a bog with a cow sitting on my wicket," I said. "How's the demolition going?"

"Fine the last time I looked."

"The last time you—Dad, aren't you at the house?"

I closed my eyes and sighed. Two weeks ago, when I'd left Dad in charge of another crew of Shiffleys to install the new septic field, he'd talked them into excavating a duck pond. Apparently, Duck, my nephew's pet duck, needed a place to paddle while visiting us. Or perhaps Dad thought Michael and I would soon acquire ducks of our own. Anyway, he'd sited the pond uphill from the septic field, but in a spot with exceptionally good drainage—so good that the pond didn't hold water. Which hadn't stopped Dad from trying to keep it full.

"Let's talk about the pond later," I said. "I need you to keep an eye on the demolition crew. See that they don't get carried away with the sledgehammers."

"Roger," he said. "I'll run right down. Oh, about those boxes in the front hall—the Shiffleys can work around them today, but next week—"

"The boxes will be long gone by next week," I said. "The professor from UVa should come by before five to haul them off; keep an eye out for her, will you?"

"Roger. By the way, speaking of the duck pond—"

I had spotted Rob peering through some shrubbery.

"Man, I thought last month's course was tough," Rob said. "Who set this one up?"

"Mrs. Fenniman," I said. "Possibly with diabolical assistance. Did you bring Spike?"

"Right here," Rob said. He pushed through the thicket and set down a plastic dog carrier. He'd gouged a small notch in its door opening so he could put Spike inside without detaching the leash. Smart.

I peered in through the mesh.

"Cow, Spike," I said. He growled in anticipation. I could see he'd already done cow duty elsewhere—his fluffy white coat had disappeared under a thick layer of mud.

A small brown blur shot toward the cow, barking and snarling. The cow must have met Spike before. She lurched to her feet with surprising agility and trotted off.

Annoying that an eight-and-a-half-pound fur ball could strike fear in the heart of a cow when I couldn't even keep her awake.

"I'll just move her a little farther while we're at it," Rob said. He grabbed the dog carrier and ambled off.

"Not too far," I said. "And remember, you're supposed to get the milk out of the cow before churning it."

I hadn't been worrying, only hoping Spike wouldn't chase the cow quite so far off. Cows were welcome as long as they refrained from lying on the stakes and wickets—the rules of eXtreme croquet defined any livestock on the course as walking wickets. Hitting the ball between the legs of a standing cow would give me a much-needed extra shot. I didn't want Spike chasing her toward a rival player.

Yes, the cow had been lying on the wicket. I bent the battered wire into an approximation of its original shape, pounded it into the ground, and leaned against a tree to await my turn.

But before it came, another player arrived. Henrietta Pruitt. I smiled and hoped it looked sincere. Mrs. Pruitt was captain of the Dames of Caerphilly, a team whose members were all big wheels in local society. I had no idea why they were here. When the Caerphilly Clarion ran the article announcing that Mrs. Fenniman had planned an eXtreme croquet tournament, I thought the townspeople would either laugh themselves silly or ignore the whole thing. Instead, we'd had to make room for two local teams.

Either they were too embarrassed to withdraw when they learned this wasn't a normal croquet tournament or they really wanted to play eXtreme croquet. All day, they'd slogged through the mud as if born to it. Maybe I'd misjudged them.

"Well, fancy meeting you here," Mrs. Pruitt said. "After you passed me a few wickets ago, I thought you'd be at the finishing stake by now."

Damn. Apparently, I'd had the lead for several wickets and never noticed. Of course, someone else could have passed both of us while we were stuck in various bogs.

"This wicket's tough," I said.

Not for her. Her ball sailed through on the first try, avoided the roots, and rolled down to tap my ball with a firm but gentle click.

"Good shot," I said. "All that golf and tennis pays off."

Maybe if I flattered her, she wouldn't roquet me.

"Yes," she said. She looked left, down the hill toward the icy stream, then right, toward the brier patch. "It's important to keep in shape, isn't it?"

She raised her mallet. I closed my eyes and tried not to wince at the sharp crack that sent my ball flying.

I plunged into the thornbushes to find it while Mrs. Pruitt played on. I dodged poison ivy, cow pies, protruding roots, and the bleached and scattered bones of a sheep.

Suddenly, I found myself perched on the edge of a steep bank, looking down at a gulley filled with more thornbushes and, by way of a change, lots of sharp, pointy rocks.

"I think I'll take a detour," I muttered. But before I could retreat, the bank crumbled, and I found myself sliding down toward the thorns and pointy rocks.

My mallet hit me in the stomach when I landed. For long seconds, I lay with my eyes closed, fighting to breathe.

I opened my eyes to answer and found myself staring into a pair of blue eyes. Strands of long blond hair fell around them, partly obscuring the woman's face but not the eyes, which stared at me with unnerving intensity.

"Are you all right?" I wheezed, shoving myself upright.

Someone had bashed in the back of her head.