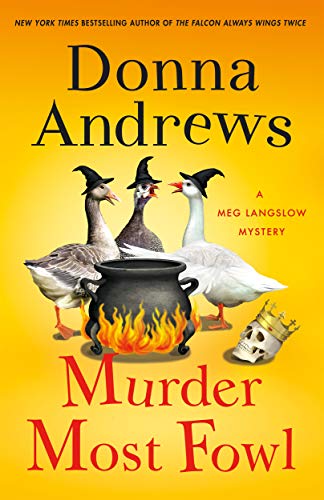 A Shakespearean twist on the long-running Meg Langslow mystery series in Murder Most Fowl, the next installment from Donna Andrews, award-winning, New York Times bestselling author of The Falcon Always Wings Twice.

Meg Langslow’s in for a busy summer. Her husband is directing a production of Macbeth, and most of the cast and crew are occupying spare bedrooms in their house. She also has to keep an eye on Camp Birnam, where a group of medieval reenactors are commemorating the real-life Macbeth by setting up what they fondly believe is an authentic medieval Scottish military camp.

And then there’s Damien Goodwin, a filmmaker who has been hanging around, trying to document the production. When Goodwin hosts a showing of some of the footage he’s taken, he manages to embarrass or offend just about everyone. The next morning Meg isn’t exactly surprised to find that someone has murdered him.

But who? Some people’s motives were obvious from the footage: the couple whose affair was revealed . . . the bombastic leader of the reenactors, who could be facing years in prison if the evidence from the video helps convict him of sheep stealing . . . the actress who’s desperately trying to downplay a health issue that could cost her the role of her life. Other motives are only hinted at—did the filmmaker have other footage that would reveal why one of the actors is behaving so furtively?

Unfortunately, whoever murdered Goodwin also destroyed all the electronic devices on which his video was stored. So Caerphilly’s chief of police—and Meg—must rediscover the same secrets the filmmaker did if they want to catch a killer. 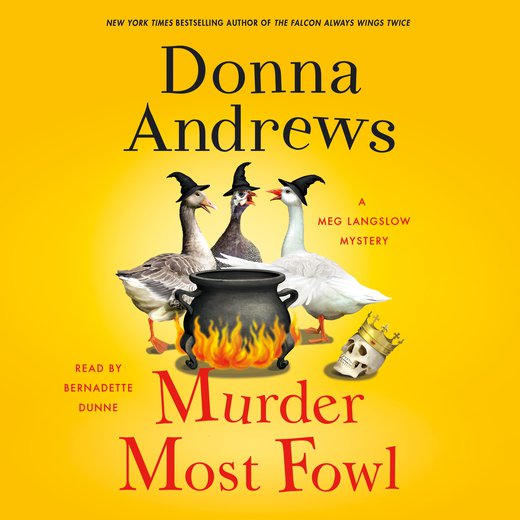 I kept my eyes firmly closed and focused on breathing in and out in the slow, deliberate way that was supposed to make you feel better when you were stressed. One … two …

“Mom,” Jamie repeated. “I know when you’re doing your yoga breathing we’re not supposed to interrupt you unless there’s actual bleeding involved.”

“But I kind of think this might qualify,” Jamie went on.

All I could see for a second were the muddy shins and baggy knees of the woolen hose they were wearing as part of their medieval costumes. I craned my neck to see upward, past the well-worn leather doublets to their faces. Josh was leaning on his longbow as if it were a staff. Jamie had his slung over his left shoulder. Neither appeared to be injured. But they both looked … anxious. And that wasn’t a look I saw very often on the faces of my not-quite-teenage sons.

They exchanged a glance. Were they deciding what to tell me? Or just sorting out who had to do the telling?

“We think we found a body,” Josh said.

I opened my mouth to chide them for interrupting my yoga breathing with what was obviously a bad practical joke. But I could see by their expressions that it wasn’t a joke.

“Out here in the woods,” Jamie said.

“One of the hands,” Jamie corrected. “Kind of sticking up out of the ground. And maybe some fingers from the other hand.”

“Show me.” I sprang to my feet. I’d been sitting cross-legged by the side of a tiny stream in the woods behind our house, trying to relax by focusing on my breath—and the peaceful sounds of the water, the bird calls, and the occasional distant baaing of our neighbor Seth Early’s sheep.

Clearly relaxation wasn’t in my immediate future. I should check out what they’d found.

They both seemed a little less anxious now that I was taking their report seriously.

I should know better than to try quoting lines from Macbeth when their father was currently directing a production of it. A production in which they both had small roles.

The boys set off, and I could barely keep up with them. Not really surprising, since they were now eye to eye with me at five foot ten. And more of their height was leg, so they set a faster pace and were in danger of leaving me behind.

But characteristically, Jamie would glance back occasionally, notice that I was falling behind, and tug at Josh’s sleeve to slow him down. And Josh slowed down a lot more readily than usual—that, combined with their expressions, told me that they were putting a brave front on something that had genuinely shaken them.

So I tried my best to keep up the pace. It helped that the last stretch was a slight downhill slope, and we arrived together at the edge of a small clearing.

I looked across the clearing and felt the hairs rise on the back of my neck. They weren’t pulling some kind of strange prank. There really were two hands poking up out of the half-rotted leaves covering the ground. Only the tips of three fingers of the left hand showed, but all five fingers of the right protruded, and even a little bit of the back of the hand. The fingers were long and slender, but twisted, contorted, as if their owner had died while reaching out to grab something in panic … or in agony. And they were deadly pale—the nails were, at least. Almost silvery. The flesh, though, was a little darker. In fact, it had a blueish-gray tint. Decay? Or was it just a trick of the light—the day was quite cloudy, and the branches of the huge oaks and maples at the edges of the clearing met overhead, so not much light made it in.

The boys each inched a little closer, as if having me along made them bolder, and I grabbed one with each hand.

“She?” Josh echoed. He took a step back.

“Mom’s right.” Jamie retreated several steps. “Definitely not a man. The fingers are too small.”

“Could be a kid,” Josh suggested.

Once I was sure they’d stay put I pulled out my phone and called 911.

“What’s wrong now, Meg?” Odd. Debbie Ann, the dispatcher, made it sound as if I’d called her at least once already today. Maybe she was just having a bad morning.

“Josh and Jamie found a dead body in the woods behind our house,” I said. “I have no idea exactly where we are, but I’ll send the boys out to the road. They can lead whoever you send back here. I’ll keep watch.”

The boys nodded and dashed off. I wasn’t exactly thrilled at being left alone with those creepy hands, but it was better than having to leave the boys alone with them.

“No idea,” I said. “All I can see is a pair of hands, sticking up out of the ground. So it’s not just dead but dead and buried, only not very competently.”

“Horrible,” she said. “Vern’s five minutes away, and the chief was already on his way out to Camp Birnam, so he’s going to stop by—he might even beat Vern.”

“The chief’s back from his family camping trip, then?” I felt a surge of relief. And then guilt. I hated the idea that on his first day back in town the chief would have to cope with a dead body—and probably a not-very-recent one at that. Although I was also glad that he’d be here to handle whatever happened.

“Why was the chief headed out to Camp Birnam?” I asked. “I mean, if you can tell me. I’m not exactly responsible for the place, but—”

“But you’ve been trying to keep them in line.” She sighed. “I know. Seth Early called up just now, madder than a wet hen. He thinks that the reenactor folks out there have stolen some of his sheep.”