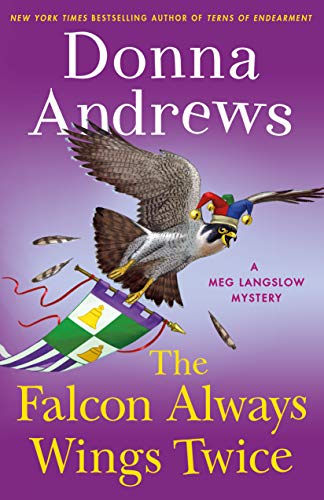 When Meg's grandmother Cordelia hosts a Renaissance Faire at her craft center, the whole family is put to work: Meg handles the blacksmithing, Michael and the boys will be performing, and no one misses the opportunity to dress up in full regalia.

More exciting to Grandfather is the pair of rare falcons he discovers breeding at the fairgrounds. Concerned for their well-being amid all the activity, he appoints himself their protector.

When one of the actors performing at the fair is found dead—an actor suspected of mistreating one of the falcons, among other sins—Grandfather is a prime suspect.

Donna Andrews’s long-running Meg Langslow series continues to be beloved by its fans, who loyally listen to every new installment. The Falcon Always Wings Twice is a perfect new addition, full of laughter, adventure, and Andrews's wonderful cast of wacky characters. 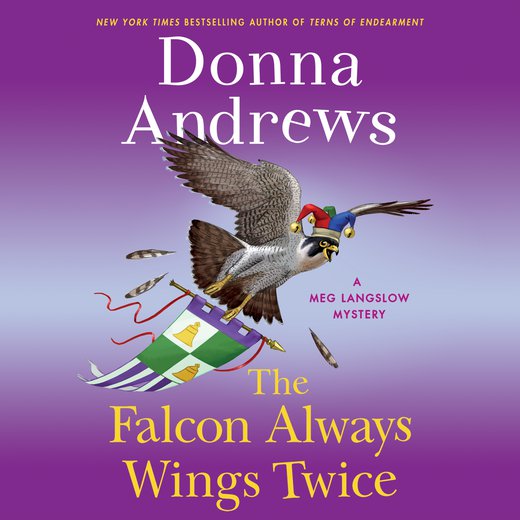 “Don’t get your hopes up. Bump off his character. In the Game.”

“I could live with them bumping him off for real,” I said. “Just as long as they pick a time when we both have alibis.”

Michael chuckled. No doubt he thought I was kidding. Of the two dozen actors, musicians, and acrobats my husband had recruited to perform at the Riverton Renaissance Faire, Terence was my least favorite by a mile. He was rude, selfish, greedy, lecherous, and just plain obnoxious. Unfortunately, he was also an integral part of what we’d come to call “the Game”—the ongoing semi-improvisational entertainment that had become so popular with visitors to the Faire.

“Most Renaissance fairs just replay the story of Henry the Eighth and one or another of his wives,” Michael had said when he’d explained the idea to my grandmother Cordelia, the Riverton Faire’s owner and organizer. “Or Queen Elizabeth beheading Essex. What I have in mind is something much more exciting. We have this fictitious kingdom, and all the actors belong to one or another of the factions fighting to control it, and they plot and scheme and duel and seduce and betray each other. And they do it loudly and publicly at regular intervals all day long, in period costume and elegant Shakespearean prose.”

“Sounds like a cross between an old-fashioned soap opera and that Game of Thrones TV show,” Cordelia had said. “I like it.”

And thus was born the troubled kingdom of Albion.

The Renaissance Faire was Cordelia’s latest entrepreneurial project. She’d started the Biscuit Mountain Craft Center a few years ago in a converted art pottery factory and it had grown from a summer-only venue to a year-round institution offering classes in a wide variety of arts and crafts. This summer, she’d decided to limit the classes to Monday through Thursday, and organize the Renaissance Faire Friday through Sunday.

Of course, her venture relied heavily on the talents of various family members—especially Michael, who took charge of the entertainment, and me, in the role of her second in command. I didn’t know whether to hope the Faire succeeded or secretly root for a failure that would let us return to spending long, lazy, relaxing summers back at home in Caerphilly.

I glanced across the room to where Michael—aka Michael, Duke of Waterston—was preening in the mirror. Okay, maybe preening was a bit harsh. After all, he was getting ready to go onstage. He appeared to be performing minute adjustments to the billowing sleeves of his white linen shirt and the fit of his red-and-black leather doublet.

I could have used the mirror myself, just for a minute, to see if running a comb through my mane had tamed it sufficiently for me to go out in public or if I should just pull it back into a rough French braid. Probably wiser to opt for the braid in either case. I’d be doing blacksmithing demonstrations at 11:00, 3:00, and 6:00, and in between I’d be running around like crazy, taking care of the thousand and one problems that would crop up during the day.

Odds were at least a few of the problems would include Terence. Would be caused by Terence. Would bring me totally into sympathy with any reasonably nonviolent plot to get rid of Terence.

“What happens if they kill off Sir Terence in the Game?” I asked aloud. “Can Cordelia fire him? Or will you have to bring him back as a different character?” Much as I disliked Terence, I had to admit that he was good at whatever you called what Michael and his troupe were doing. He was among the best at improvising faux Elizabethan dialogue, threw himself with relish into his role as Albion’s archvillain, and was sufficiently skilled at stage combat that he was permitted to draw his sword occasionally—though only in scenes with others of similar skill. Most of the actors—and for that matter, most of the costumed staff—were under strict orders not to draw their swords under any circumstances, for fear that they’d skewer themselves, each other, or the innocent paying bystanders.

“Dunno.” Michael shook his head slowly. “The show would be a lot less lively without him.”

“Yes, but everyone here would be a lot happier,” I pointed out. “And—”

Someone knocked on our door.

“Are you two coming to breakfast?” My grandmother Cordelia.

“Are we late?” Michael glanced at the wrist where his watch would be if he weren’t in costume.

“No, breakfast isn’t over for another half an hour,” I told him after checking my bedside alarm clock. Then I raised my voice to call out. “Come in!”

Cordelia opened the door with a little more force than necessary and strode in.

“Good. There you are.” Her tone seemed to suggest that she’d been searching for us long enough that the effort had made her cranky. Which was pretty silly—neither Michael nor I were early risers. What were the odds that we’d be anywhere but in our bedroom before breakfast? She, on the other hand, was a total lark, so I wasn’t surprised to see her already decked out in the red-and-black brocade gown she wore for her role in the Game, as Good Queen Cordelia of Albion. Maybe that was part of the problem. I’d have been cranky too if I’d had to get up this early on an already warm July day and put on a corset—not to mention a farthingale, the Tudor version of a hooped skirt.

“Good morning to you, too,” I said aloud. “Something wrong?”

“Can you come down to the Great Room and deal with your grandfather?”