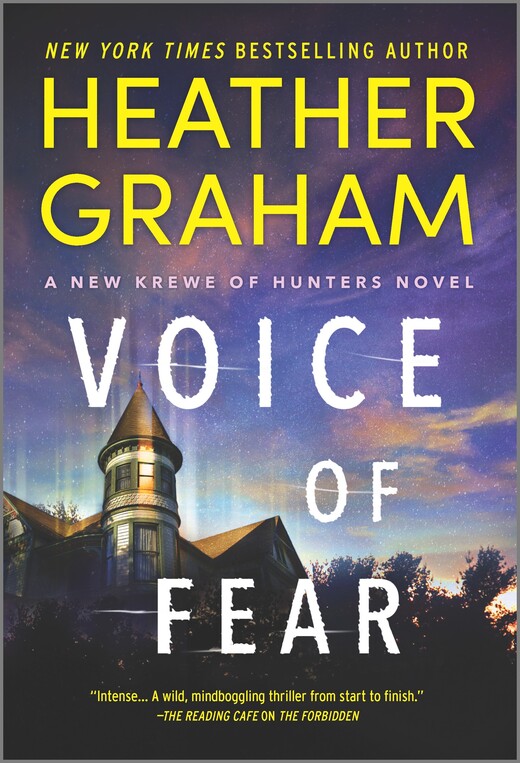 A killer is looking to silence them, once and for all.

FBI agent Jordan Wallace is close to cracking the human trafficking case she’s been working, when she does the one thing she should never do: let her guard down. The botched undercover mission is semisalvaged by the last-minute appearance of criminal psychologist Patrick Law, but Jordan can’t imagine making a worse first impression. Especially when she’s partnered with Patrick moving forward.

Patrick’s innate ability to get inside a criminal’s head is an asset for the Krewe of Hunters. But Jordan wishes she could protect her own thoughts from her new partner. Patrick assures her that both she and her thoughts are safe with him, but Jordan’s less sure about her heart. Letting someone have her back has never been her strong suit, but with a dangerous killer still at large, trusting in Patrick might be the only thing keeping them alive.

"A harrowing journey… Intelligent, fast-paced and frightening at all times."

—Suspense Magazine on The Final Deception 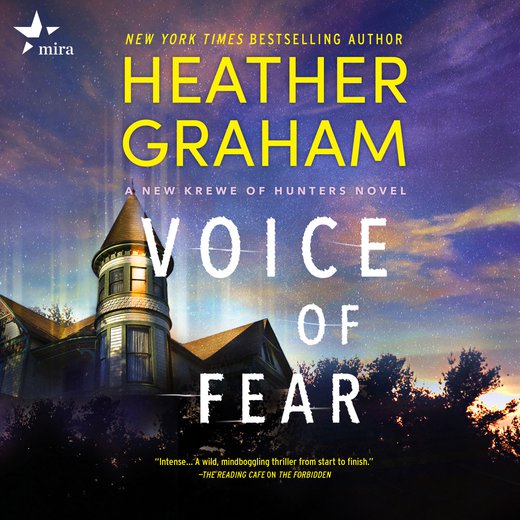 Jordan didn’t know the pretty redhead who choked out the muffled word. She was among the many young women, including Jordan, who had been kidnapped that evening.

She did know the young woman was terrified.

Jordan was somewhat terrified, too. But she was also a trained FBI agent. She had excelled at Quantico, and she’d been incredibly gratified to join the legendary Krewe of Hunters, where she’d been accepted and respected and was already known for her undercover work. Jackson Crow had warned her, though—never be caught off guard.

She’d thought she had been careful, but now that seemed ludicrous. Her service Glock had been hidden in her clothing in her bag, beneath some towels. She had never thought the danger might come from beneath her in the water as she dressed the part of a woman on vacation in a blue bikini.

Now it was her undercover work—and failing to realize Jackson had meant never, ever, not for a single second, be caught off guard—that had brought her here. She didn’t know where she was exactly, though she had tried to listen to every sound she’d heard as they had driven here in what seemed like a van despite them referring to it as “the meat train,” noting every twist and turn they had taken. She hadn’t been knocked out as some of the girls had been. The big man they called Lefty had disliked her from the start and had given her a good knock on the head, hard enough to send her reeling and for him to bind her hands behind her back. Of course, she had fought him. She liked to believe if she hadn’t been taken by surprise in the pool, she might have beaten him and escaped to save the others. She had gone through many self-defense classes. She knew how to kick hard enough to send someone off-balance, how to lock her elbows around an attacker’s neck, how to duck, twist, dive, and deliver a killer right hook. But she had neglected Jackson’s one warning: she had been caught off guard.

Who the hell kidnapped someone right out of the water at a hotel pool that was popular with tourists and locals, anyway?

He’d hit her good—but he hadn’t tied her quite so well. She’d left her gag in place and used every ounce of her senses and strength to work at the rope around her wrists.

If he’d hit her any harder, she might not have picked up on the men calling the vehicle they were in “the meat train” or realized in terror where they might be going—an old packing plant or slaughterhouse.

She feared that, once inside, there would be a deep cellar or basement. There would be cells of some variety, a place where the men kept their “meat” before it was sold.

But the van door had opened and two men were outside arguing about the product.

Jordan knew they were arguing about her. Lefty thought he should have a turn with her since she was clearly in her twenties, no pure angel to be sold to the highest bidder.

His partner was yelling they weren’t paid to sample the merchandise.

This was her chance.

“No!” the redhead cried out again. She, too, had been bound and gagged.

Jordan freed her wrists and twisted to start working at her ankles. She was up in a flash, tearing at the gag in her mouth.

The redhead was sobbing and rambling beneath her gag.

Jordan knew why. There had been talk on the street. That talk had turned into the reason she was here now.

Months ago, the body of a woman had been found floating in the Potomac River. She had never been identified. She had been shot through the heart after being beaten. Rumors began to swirl. Sister Mary Kathleen had gone to the police, claiming homeless youths who had used her shelter had just disappeared.

Then a high-profile someone had disappeared. The daughter of a congressman.

Jordan had already been working undercover as a sex worker. She had started out walking the streets. But when the high-profile woman had disappeared, she’d changed her identity, pretending to be a college girl on holiday. She became friends with a group staying at the Castleberry Estate—an old mansion that had been turned into a five-star hotel with outbuildings, a spa, four Jacuzzis, and a giant, meandering pool that curled around a bar and offered charming, smaller pools within the larger one, between little concrete “islands” that were flush with foliage.

It was the last place Chelsea Moore, the congressman’s daughter, had been seen. She’d met up with high school friends who had come down from college. Rumor and fear suggested whoever was taking women was killing them the moment they caused a problem.

The lounge chairs where she’d sat with the girls she’d befriended had been no more than twenty feet away. Belinda Hoyt and Terry Unger had been lounging on the chairs when Ellie Ferguson had insisted they race across to the bar.

Jordan was a good swimmer, a strong swimmer, but the man had come out of nowhere; and she’d twisted and fought and then gasped for air, kicking and struggling away, but it had been too late. Bursting to the surface for air, she’d been met with the slam of a fist. A glance at the lounge chairs revealed that Belinda and Terry were gone—they had disappeared in seconds. The world had become a fog. And then she’d found out what was happening to the missing women. It was what she and one of the Krewe organizers, Angela Hawkins Crow, had suspected: a sex-trafficking ring.

In her daze, she’d noticed the men who had taken them in the meat train had not been armed. They were arrogant and confident in their ability to manage the six women they had taken—Belinda, Terry, Ellie, herself, plus the redhead and a blonde. They had been taken at closing time, when families were all inside, when the pool bar was winding down, and the night life inside the place had begun. It happened swiftly—so swiftly no alarms had been raised. They would be by now, of course. But the girls were long gone.

Jordan was determined she wouldn’t be locked up. She believed the traffickers were getting their “merchandise” out of the country as swiftly as possible. She had to break free and run. She wouldn’t be caught off guard this time. And she was certain she could outrun Lefty even if he did have a mean left hook.

That was the only way to bring help to the others.

The men were starting to turn toward the van; the wide hatch door was open. Lefty was about to hop up.

Jordan slammed him hard with a right-foot kick just as he stepped up. As she had hoped, he was in agony—and off-balance. He fell back hard, crashing into his slimmer partner, knocking him off his feet as well. She leapt from the truck, searching the area. They were in an alley behind a large building.

An old meat-packing plant, just as she had suspected.

She had to reach the street.

She ran. She was halfway through the alley when she heard Lefty’s partner shouting.

“Get back here—unless you want every single one of your friends shot in the head!” he warned.

She slowed, then turned around. She stared at him, shaking her head. “The FBI is on to you! I’m not alone!”

Of course, she was alone.

The partner started off toward her again. “I’m gonna tell the boss! I get to shoot her!” Lefty shouted. He was still gripping his crotch.

“They are on their way; you’ll hear the sirens any minute!” Jordan warned.

Night had fallen. The alley was dark. Only moonlight provided a dim glow.

Jordan spun around. To her astonishment, she knew the man standing behind her, a no-nonsense Glock 22 in his hands, aimed at the kidnappers. He wasn’t in a uniform; he didn’t have one. He stood at about six-three, and he sure as hell looked the part of a man who wouldn’t hesitate to fire if necessary.

And she knew he had dialed a certain number on his phone before he’d accosted the men, and that there would be sirens soon.

“Patrick Law?” she whispered, stunned he was there. He wasn’t Krewe; he wasn’t a cop. The man was a psychiatrist!

Lefty’s partner took off running in the other direction. Lefty was screaming, heading into the building to get away, limping as he continued to clutch his groin.

“I’ve got the runner,” Patrick said. “Wait! You’re not armed. Help is coming.”

He headed after Lefty’s partner, who, ahead, in the alley, suddenly tripped on what appeared to be nothing at all. Then Patrick was standing over him, warning him not to move.

Within seconds, emergency vehicles, police, and SWAT teams were on the scene, crowding into the alley along with a dark SUV filled with members of the Krewe.

Which was good for Jordan; the police officers were trying to help her, assuming she was a random victim. They brought her a blanket and urged her to the rear of one of the rescue vehicles. Bruce McFadden from the Krewe helped her explain she was FBI. She told them the real victims were in the van and in the warehouse and that they needed to hurry.

The traffickers might decide to murder the girls being held in the old slaughterhouse as they tried to escape.