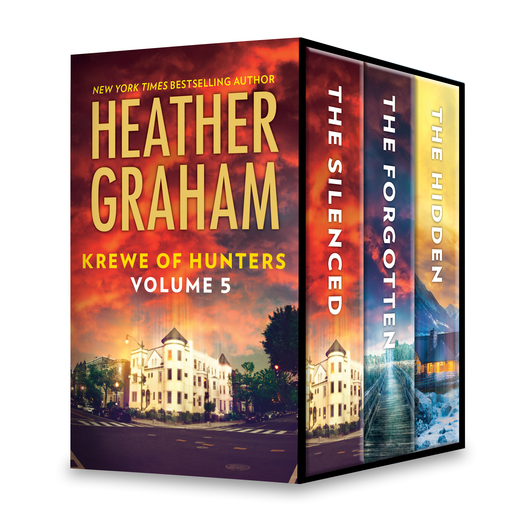 Join New York Times bestselling author Heather Graham’s Krewe of Hunters, an elite FBI unit of paranormal investigators, as they’re called in to investigate when cases take a turn for the strange and there are no earthly leads…THE SILENCEDA congressman’s media assistant suddenly quits her job—and disappears. Bodies fitting her description are showing up in nearby rivers… Could she be the victim of a serial killer? Novice FBI agent Meg Murray is assigned to work with special agent Matt Bosworth, a hard-nosed pro in the Krewe of Hunters. They trace a route through battlefields and graveyards from Harpers Ferry to Gettysburg. Places where the dead share their secrets with those who can hear… When Meg and Matt find themselves in the middle of a political conspiracy, whom—besides each other—can they trust?THE FORGOTTENWhen a Miami woman is murdered—apparently by her presumed-dead husband—rumors of crazed zombies abound in the media, and the Krewe of Hunters is assigned. FBI agent Brett Cody can’t help but feel responsible, since he was supposed to protect the man and his wife. Nearby, Lara Mayhew is working at a dolphin research facility. She loves her new job…until a dolphin brings her attention to a dismembered human corpse. Soon Brett and Lara find themselves working with the Krewe, and working closely together. An elderly crime boss who’s losing his memory seems to be key to solving this case, but there’s no motive. Unless Brett and Lara can uncover one in the Miami underworld. And that means they have to protect themselves—and each other.THE HIDDENHistorian Scarlet Barlow is trying to rebuild after her divorce by working at a small museum attached to a B and B in Estes Park, Colorado. It’s the site of an unsolved murder dating from just after the Civil War. When Scarlet unwittingly takes pictures of people who’ve been murdered in the same manner as the past crime, the police look at her with suspicion. Can the same killer strike again—a hundred and fifty years later? Then the museum’s statues of historic people begin to talk to her, and she knows it’s time to call her ex-husband, FBI agent Diego McCullough—who’s just been asked to join the Krewe of Hunters. Diego heads to Estes Park, determined to solve the bizarre case that threatens Scarlet’s life…and to reunite with the woman he never stopped loving.