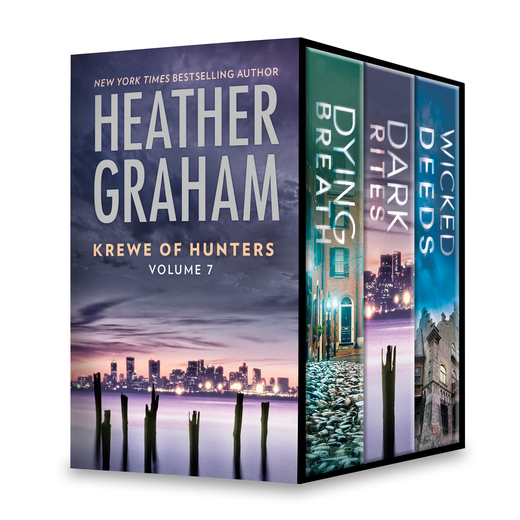 Join New York Times bestselling author Heather Graham’s Krewe of Hunters, an elite FBI unit of paranormal investigators, as they’re called in to investigate when cases take a turn for the strange and there are no earthly leads…

Three thrilling stories together in one box set!

The city of Boston is being terrorized—someone is kidnapping women and burying them alive, but cruelly leaving a glimmer of hope for the authorities by sending a clue about their location. Historian Vickie Preston is pulled into the investigation when her name is mentioned in one of the notes. Special Agent Griffin Price is on the case for the Krewe of Hunters. He’s protective of Vickie, since their shared past is connected to the threat that currently surrounds them. With the killer accelerating his plans, time is running out for more victims hidden around the city. Vickie is becoming closer with Griffin, but she’s getting too close to the danger, and every breath could be her last.

Someone is viciously beating random strangers around old Boston, and Vickie’s friend Alex Maple was one of the victims—and now he’s gone missing. The escalating attacks suggest that a dangerous cult is at work behind the scenes—one so powerful that its members would rather die than be apprehended. Vickie and Griffin are finding their way in an increasingly passionate relationship, and Griffin is desperately trying to keep her safe and the two of them sane amid the disturbing investigation. The search for Alex will take them deep into the wilderness of Massachusetts on the trail of a serial killer, and it will take everything they have to survive the ancient evil that awakens and threatens not just the man they’re striving to save, but their very souls.

Vickie and Griffin’s romantic weekend in Baltimore is interrupted when a popular author is found dead in the basement of an Edgar Allan Poe-themed restaurant. As more bizarre deaths occur, they are drawn into a case that has disturbing echoes of Poe’s great works, bringing the horrors of his fiction to life. The restaurant is headquarters to scholars and fans, and any of them could be a merciless killer. Unless they can uncover whose twisted mind is orchestrating the dramatic re-creations, Vickie and Griffin’s future as a couple might never begin…