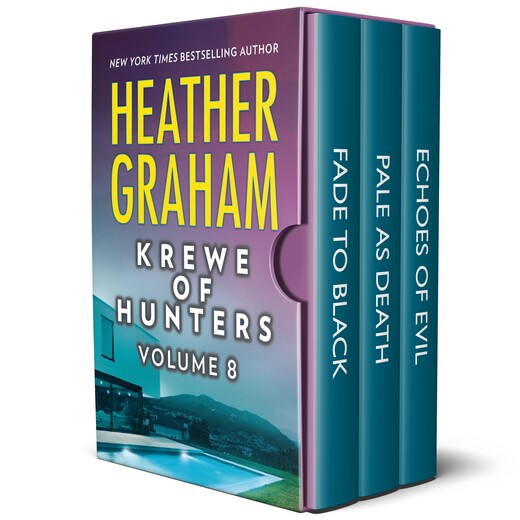 The Krewe of Hunters is back with new recruits! Join the McFadden brothers as they deploy their otherworldly skills to solve the cases that mystify regular police. Together for the first time in one box set, three spine-tingling tales of romantic paranormal suspense from the queen of the genre, New York Times bestselling author Heather Graham.

Private Investigator Bryan McFadden is about as far from “Hollywood” as you can get, but when an actress from a once-cult TV show is targeted by a killer who seems to vanish into thin air, he’s compelled to help. It’s unclear if they’re dealing with an obsessed fan or something far more sinister. Could the show’s cast really be cursed? How can Bryan keep Marnie safe when it becomes apparent someone is determined to make this her final curtain call?

LAPD Detective Sophie Manning’s new case is high-profile and horrific: a young actress has been murdered in a way that echoes the infamous Black Dahlia killing. As a consultant for the Krewe, Bruce McFadden has been tasked with the case and they’re forced to partner up. But Sophie doesn’t want his help. As the killer taunts the police, Sophie and Bruce will discover that the threat is closer than they’d ever realized. Working side by side is the only way they’ll stop this deadly sequel.

In the middle of a performance, a beloved local Key West musician drops dead. It seems accidental, but festival organizer Kody McCoy isn’t so sure. Brodie McFadden is supposed to be on vacation, but a diving excursion to a historic shipwreck uncovers a crime scene—and the corpse is new. Brodie thinks the recent deaths are linked, and he needs help from Kody. Something about her festival is dangerous. Has she uncovered a treasure from the past that someone will kill for?