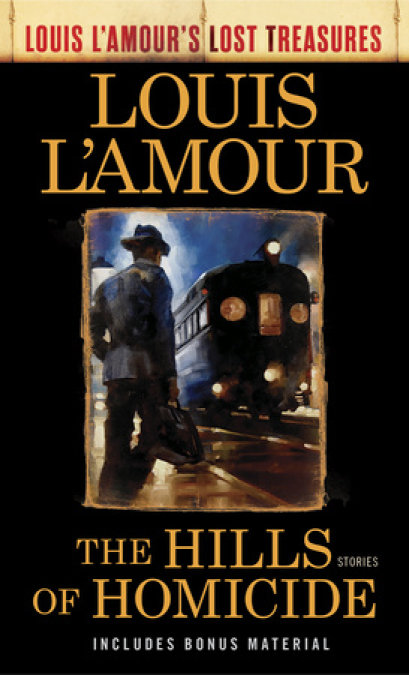 Here is a collection of Louis L’Amour detective stories—vivid tales as memorable and exciting as his beloved frontier fiction. Each story is personally selected and introduced by the author.

In the dark alleys of the pulsing cities and the savage criminal wildernesses, Louis L’Amour introduces a new brand of characters: men like Kip Morgan, the ex-fighter turned detective who is tough enough to bounce a bouncer yet has more up his sleeve than sheer muscle; Joe Ragan, the dedicated career cop who fears nothing in the pursuit of justice; and women whose soft laughter covers their underlying cruelty.

These are fast-moving stories of brawls where if a man goes down and doesn’t get up fast enough he’s through, of flashing knives that whisper death, of guns that blaze their fatal fire through the blackest nights.

In Louis L’Amour’s Lost Treasures: Volume 1 and Louis L’Amour’s Lost Treasures: Volume 2,  Beau L’Amour takes the reader on a guided tour through many of the finished and unfinished short stories, novels, and treatments that his father was never able to publish during his lifetime. L’Amour’s never-before-seen first novel, No Traveller Returns, faithfully completed for this program, is a voyage into danger and violence on the high seas.

The station wagon jolted over a rough place in the blacktop, and I opened my eyes and sat up. Nothing had changed. When you are in the desert, you are in the desert, and it looks it. We had been driving through the same sort of country when I fell asleep, the big mesa that shouldered against the skyline ahead being the only change.

“Ranagat’s right up ahead, about three, four miles.” Shanks, who was driving me, was a thin-­faced little man who sat sideways in the seat and steered with his left hand on the wheel. “You won’t see the town until we get close.”

“Right up against it. Small town, about four hundred people when they’re all home. Being off the state highway, no tourists ever go there. Nothin’ to see, anyway.”

“No boot hill?” Nearly all of the little mining towns in this section have a boot hill, and from the look of them, shooting up your neighbors must have been the outstanding recreation in the old days.

“Oh, sure. Not many in this one, though. About fifteen or twenty with markers, but they buried most of them without any kind of a slab. This boot hill couldn’t hold a candle to Pioche. Over there they buried seventy-­five before the first one died of natural causes.”

“You said it. Speakin’ of guys gettin’ killed, they had a murder in Ranagat the other night. Old fellow, got more money than you could shake a stick at.”

“Uh-­huh. They don’t know who done it, yet, but you needn’t worry. Old Jerry will catch him. That’s Jerry Loftus, the sheriff. He’s a smart old coot, rustled a few cows himself in the old days. He can sling a gun, too. Don’t think he can’t. Not that he looks like much, but he could fool you.”

Shanks put a cigarette between his lips and lit it with a match cupped in his right hand. “Bitner, his name was. That’s the dead man, I mean.” He jerked his cigarette toward the mesa. “Lived up there.”

“On top?” From where I sat, the wall of sheer, burnt-­red sandstone looked impossible to climb. “How’d he get up there?”

“From Ranagat. That’s the joker in this case, mister. Only one way up there, an’ that way is in plain sight of most of Ranagat, an’ goes right by old Johnny Holben’s door. Nobody could ever get up that trail without being seen by Johnny.

“The trail goes up through a cut in the rock, and believe me, it’s the only way to get on top. At a wide place in the cut, Johnny Holben has a cabin, an’ he’s a suspicious old coot. He built there to annoy Bitner because they had it in for each other. Used to be partners, one time. Prospected all this country together an’ then set up a company to work their mines. ‘Bitner and Holben,’ they called it. Things went fine for a while, and they made a mint of money. Then they had trouble an’ split up.”

“Some folks think so, but others say no. Bitner’s got him a niece, a right pretty girl named Karen. She came up here to see him, and two days after she gets here he gets murdered. A lot of folks figure that was a mighty funny thing, her being heiress to all that money, an’ everything.”

So there were two other suspects, anyway. That made three. Johnny Holben, Karen Bitner, and my client. “Know a guy named Caronna?"

“Blacky Caronna? Sure.” Shanks slanted a look at me out of those watchful, curious eyes. I knew he was trying to place me, but so far hadn’t an inkling. “You know him?”

“Heard of him.” It was no use telling Shanks what I had come for. I was here to get information, not give it.

“He’s a suspect, too. An’ in case you don’t know, mister, he’s not a nice playmate. I mean, you don’t get rough with him. Nobody out here knows much about him, an’ he’s lived in Ranagat for more than ten years, but he’s a bad man to fool with. If your business is with him, you better forget it unless it’s peaceful.”

“Sure. Him an’ old Bitner had a fight. An argument, that is. Bitner sure told him off, but nobody knows what it was about but Caronna; an’ Blacky just ain’t talkin’.

“Caronna is sort of a gambler. Seems to have plenty of money, an’ this place he built up here is the finest in town. Rarely has any visitors, an’ spends most of his time up there alone except when he’s playin’ poker.

“The boys found out what he was like when he first came out here. In these Western towns they don’t take a man on face value, not even when he’s got a face like Blacky Caronna’s. Big Sam, a big miner, tangled with him. Sam would weigh about two-­fifty, I guess, and all man. That’s only a shade more than Caronna.

“They went out behind The Sump, that’s a pool hall an’ saloon, an’ they had it out. Boy, was that a scrap! Prettiest I ever seen. They fought tooth an’ toenail for near thirty minutes, but that Caronna is the roughest, dirtiest fighter ever come down the pike. Sam was damn near killed.”

“Uh-­huh. Maybe an inch shorter than you, but wide as a barn door. And I mean a big barn! He’s a lot heavier than you, an’ never seems to get fat.” Shanks glanced at me. “What do you weigh? About one-­eighty?”

“You don’t say? You must have it packed pretty solid. But don’t you have trouble with Caronna. You ain’t man enough for it.”

That made me remember what the boss said before I left. “His money is as good as anybody’s money, but don’t you get us into trouble. This Caronna is a tough customer, and plenty smart. He’s got a record as long as your arm, but he got out of the rackets with plenty of moola, and that took brains. You go over there and investigate that murder and clear him if you can. But watch him all the time. He’s just about as trustworthy as a hungry tiger.”

The station wagon rolled down the last incline into the street and rolled to a halt in front of a gray stone building with a weather-­beaten sign across the front that said Hotel on one end and Restaurant on the other.

The one street of the town laid everything out before you for one glance. Two saloons, a garage, a blacksmith shop, three stores, and a café. There were two empty buildings, boarded up now, and beyond them another stone building that was a sheriff’s office and jail in one piece.

Shanks dropped my bag into the street and reached out a hand. “That will be three bucks,” he said. He was displeased with me. All the way over I had listened, but he had no more idea who I was than the man in the moon.

Two thistle-­chinned prospectors who looked as if they had trailed a burro all over the hills were sitting on the porch, chewing. Both of them glanced up and stared at me with idle curiosity.

The lobby was a long, dank room with a soot-­blackened fireplace and four or five enormous black leather chairs and a settee, all looking as if they had come across the plains fifty or sixty years ago. On the wall was a mountain lion’s head that had been attacked by moths.

A clerk, who was probably no youngster when they opened the hotel in ’67, got up from a squeaky chair and shoved the register at me. I signed my name and, taking the key, went up the stairs. Inside the room I waited just long enough to take my .45 Colt out of the bag and shove it behind my belt under my shirt. Then I started for the sheriff’s office. By the time I had gone the two blocks that comprised the full length of the street, everyone in town knew me by sight.

Jerry Loftus was seated behind a rolltop desk with both feet on the desk and his thumbs hooked in the armholes of his vest. His white, flat-­crowned hat was shoved back on his head, and his hair and mustache were as white as the hat. He wore cowboy boots with spurs, and a six-­shooter in an open-­top holster.

Flipping open my wallet, I laid it in front of him with my badge and credentials showing. He glanced down at them without moving a hand, then looked up at me.

“Private detective? Who sent for you?”

“Look around. My orders are to investigate the crime, find evidence to clear him, and so get you off his back. From the sound of it”—­I was fishing for information—­“he didn’t seem to believe anybody around here would mind if he was sentenced or not. Guilty or not.”