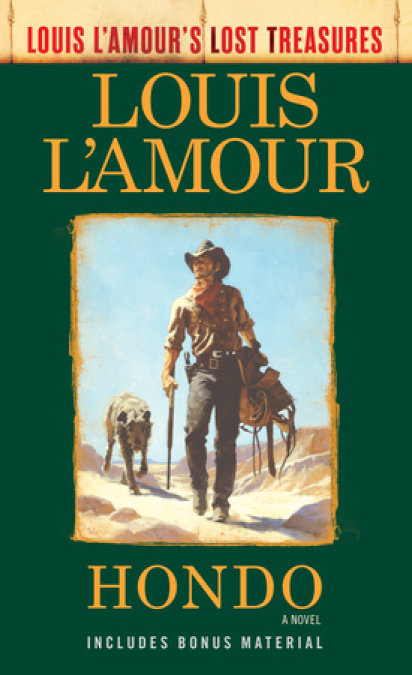 He was etched by the desert's howling winds, a big, broad-shouldered man who knew the ways of the Apache and the ways of staying alive. She was a woman alone raising a young son on a remote Arizona ranch. And between Hondo Lane and Angie Lowe was the warrior Vittoro, whose people were preparing to rise against the white men. Now the pioneer woman, the gunman, and the Apache warrior are caught in a drama of love, war, and honor.


From the Paperback edition. 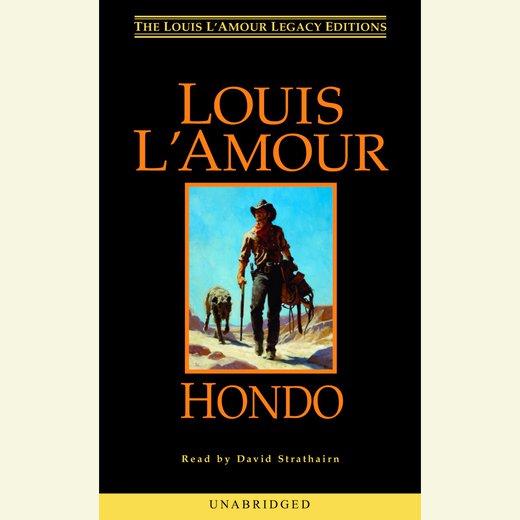 HE ROLLED THE cigarette in his lips, liking the taste of the tobacco, squinting his eyes against the sun glare. His buckskin shirt, seasoned by sun, rain, and sweat, smelled stale and old. His jeans had long since faded to a neutral color that lost itself against the desert.

He was a big man, wide-shouldered, with the lean, hard-boned face of the desert rider. There was no softness in him. His toughness was ingrained and deep, without cruelty, yet quick, hard, and dangerous. What­ever wells of gentleness might lie within him were guarded and deep.

An hour passed and there was no more dust, so he knew he was in trouble. He had drawn up short of the crest where his eyes could just see over the ridge, his horse crowded against a dark clump of juniper where he was invisible to any eye not in the immediate vicinity.

The day was still and hot. Sweat trickled down his cheeks and down his body under the shirt. Dust meant a dust devil or riders . . . and this had been no dust devil.

The dust had shown itself, continued briefly, then vanished, and that meant that he also had been seen.

If they were white men fearful of attack, they were now holed up in some arroyo. If they were Apaches, they would be trying to close in.

He studied the terrain with care, a searching study that began in the far distance and worked nearer and nearer, missing no rock, no clump of brush, no upthrust ledge. He saw no further dust, heard no sound, detected no movement.

He did not move. Patience at such a time was more than a virtue, it was the price of survival. Often the first to move was the first to die.

Hondo Lane took out the makings and built another cigarette. When he struck the match he held it well back in the foliage of the juniper, keeping the flare invisible. He drew deep on the cigarette, returning his attention to the terrain.

The rough-looking mongrel dog that followed him had lowered himself into the soft earth beneath another juniper a dozen yards away. The dog was a big brute, gaunt from running.

It was hot. A few lost, cotton-ball bunches of cloud drifted in a brassy sky, leaving rare islands of shadow upon the desert’s face.

Nothing moved. It was a far, lost land, a land of beige-gray silences and distance where the eye reached out farther and farther to lose itself finally against the sky, and where the only movement was the lazy swing of a remote buzzard.

His eyes wandered along the ridge. To his right there was a shallow saddle, the logical place to cross a ridge to avoid being skylined. Logical, but obvious. It was the place an Apache would watch.

There were junipers beyond the ridge, and broken boulders upon the ridge itself. In less than a minute he could cross the ridge and be in the shelter of those junipers, and if he took his time and made no sudden moves to attract the eye, he might easily cross the ridge without being seen.

He thought none of this. Rather it was something he knew, something born of years in wild country.

Hondo Lane crossed the ridge into the junipers and hesitated briefly, studying the country. His every instinct told him those riders had been Apaches and that they were somewhere close by. Yet the dog had given no sign.

He eased his weight in the saddle and checked the eager­ness of the horse, which smelled the water in the river not far ahead.

Finishing his cigarette, he pinched it out and dropped it to the sand and angled down the slope. He slid his Winchester from its scabbard and rode with it across the saddle, keeping his horse to a walk. Vittoro was off the reservation with his fighting men, and that could mean anything. Council fires burned and there was much coming and going among the lodges. Mescaleros had been hunting with the Mimbreños and the border country was alive with rumors.

Hondo Lane could smell trouble, and he knew it was coming, for others and for himself.