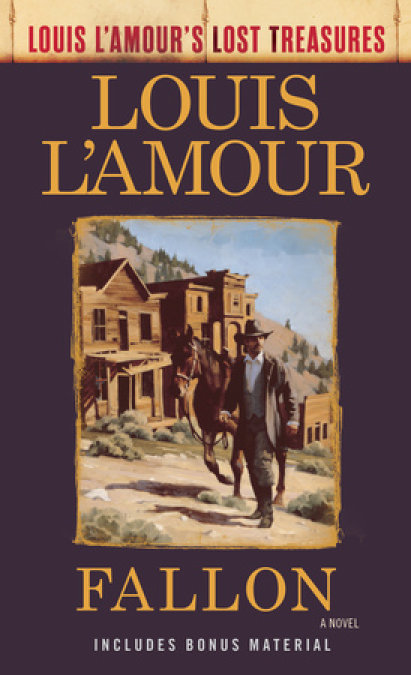 Macon Fallon had never needed more than a deck of cards, a fast horse, and a ready gun; he was counting on those things now as he led an unsuspecting group of settlers to an abandoned mining town. But while Fallon prepared to pass the ghost town off as a gold mine in the making, a funny thing happened: a real-life community started to take shape in the town he'd christened Red Horse. So when a band of vicious outlaws and a kid who fancied himself a gunslinger threatened to rip Red Horse apart, Fallon found himself caught in one predicament he'd never gambled on. He had come to Red Horse to make a quick fortune, but now he might have to pick up a gun and risk his life for a place he never wanted to call home.… 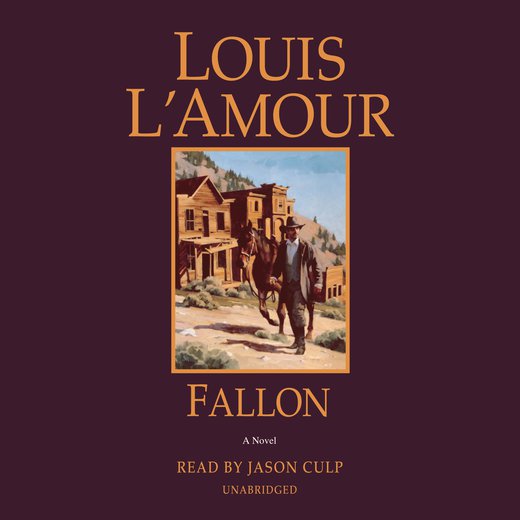 In the course of an eventful life, Macon Fallon had become a connoisseur of western hospitality, and knew when a limit had been reached.

Hence, when an escorting party, complete with rope, arranged to conduct him to the vicinity of a large cotton­wood where the eve­ning’s festivities would be concluded, he wasted no time on formalities, but promptly departed the premises.

The moment chosen was, of course, appropriate to the situation. The ­self-­appointed posse ­were as confident as a few drinks could make them, but ­were totally unaware of the quality of the man they escorted.

One of the riders had lagged a little, and at that moment they came abreast of an opening in the brush that walled the trail. Fallon rode an excellent cutting ­horse that could turn on a dime.

The black ­horse went through the opening with a bound and, sensing the urgency of its rider, took off on a dead run.

No ­horse Fallon had ever seen could catch that black of his in under half a mile, and by the time that distance lay behind, Fallon was prepared to resort to evasive tactics. The black had staying quality as well as an initial burst of speed; and the posse, less superbly mounted, fell rapidly behind.

Unfortunately, by the time the opportunity for escape was offered, only one direction remained to Fallon . . . and westward lay a waterless waste . . . or one that was relatively so.

The nearest water hole was thirty miles off, but on Fallon’s one previous visit the water there had been plentiful and good. With a safe lead, and some tracks purposely left to indicate that he had circled the town, he settled down for a long ­ride.

At thirty miles, with his throat parched for a drink, the water hole proved to be a bed of dried, cracked mud.

At ­forty-­two miles, with his ­horse stumbling, the creek was a dusty trough, and Macon Fallon was a man in trouble.

Somewhere behind was a posse of irate citizens who had by this time found his trail. They would be coming along with filled canteens and could afford to ignore the water holes.

To the best of his knowledge, which admittedly was not thorough, the next seventy miles offered no water.

Dust sifted over him, and sweat ­etched a fine pattern of lines upon his lean, ruggedly handsome if somewhat saturnine features. He dismounted, talked to the ­horse to reassure it, then walked on, leading the ­horse.

He was a man naturally considerate of ­horses, but he also knew that in this country if his ­horse should die, his own death was only a matter of time.

THE TROUBLE IN Seven Pines had been none of his own making. It has been written that while Man proposes, God disposes; but when Macon Fallon joined that poker game he had no idea he was sitting in on an invitation to death.

He had money, a good ­horse, and time for a leisurely ­ride south. The poker game was merely a means to endure a dull eve­ning in a strange town; whether he won or lost was unimportant.

His mood was pleasant, his prospects excellent, and the future looked good indeed, yet when he drew back that chair at the poker table, he sat down to trouble.

The game began innocently enough. He won a small pot, lost two. . . . As the eve­ning progressed he drew no very interesting cards. By midnight he was winner to the tune of six silver dollars, and was ready to turn in. At that moment, destiny took a hand.

Now, Fallon was a man who could do things with cards. He could, while shuffling, run up a top stock or a bottom stock; he could shift the cut, deal from the top or the bottom, or ­second-­deal; and he knew all about slick aces, marked or trimmed cards, shiners, mirrors in ­pipe-­ bowls or match boxes, and the tiny pricks on finger rings for the purpose of marking cards.

Sleeve and belt holdouts ­were no mystery to him, and he knew all about the man who brings drinks or sandwiches to the table with a cold deck held underneath the tray ready for a switch. In short, Macon Fallon was a professional; and although usually honest, he was not above cheating the cheaters if they invited it.

On this night he was playing a fair game, and was not especially interested in winning.

Suddenly he was dealt an ace, another ace, and a third one. He discarded two indifferent cards, and was rewarded with two queens. The pot was very satisfactory, and no comment was made.

The following hand he received two sevens and a pair of jacks, then drew a third seven. Once more the pot was a pleasant one; and a player named Collins, a pop­u­lar man locally, gave him a long, careful look and commented, “You are lucky to­night.”

Collins glanced at him. “You have a good deal of our money. Better give us a chance to win it back.”

Instinct warned that he should get out while the getting was good, but even as he spoke the deal was progressing. It was with relief that he picked up two fours. He would lose this hand, then he would quit.

He contributed liberally to the pot, and on the draw he picked up the other two fours.

Recognizing his dismay, they misunderstood its reason. Promptly, they began to raise, and Macon Fallon was not a man to look gift ­horses in the teeth, nor will any gambler in his right mind betray his luck.

Besides, there was a poem he recalled, a poem that went something like this:

If he play, being young and unskillful,

For shekels of silver and gold—

The kid was ordained to be sold.

Unfortunately, that drawing of fours was followed by the drawing of sixes, and Collins lost on that draw also. He started to take action, and Fallon, forced to deal, placed two aces of lead, neatly spaced over the heart of Collins, where they might have been covered by a blue chip.

The shooting was fair, and nobody had seen anything wrong with the play, but Collins had been a pop­u­lar man and nobody wanted to see all that money leave Seven Pines.

A ­self-­appointed committee convened and it was decided to hang Fallon, whereupon the committee repaired to the bar to drink to their decision. Several drinks later Macon Fallon was led to his ­horse and started along the road toward the selected cottonwood.

Befuddled by too many toasts to the occasion, and exhilarated by the prospect of excitement in town, they ne­glected to search Fallon’s ­saddle­bags or even to remove the rifle from its scabbard. After all, his hands ­were bound behind him and they had only half a mile to go.

It could not be said that Macon Fallon was a man who missed opportunities, or was laggard in putting time to use. No sooner was he seated in the saddle than he began straining his fingers to reach the knots that bound his wrists, a proceeding considerably facilitated by the fact that he had taken the precaution of tensing his muscles as they bound him, which permitted a little slack.

He had, on a couple of previous occasions, been witness to hangings, and the proceedings had filled him with distaste. The prospect of being the central figure in such a ceremony attracted him not at all.

Yet dying of thirst was scarcely preferable, and that appeared to be the alternative he had chosen. Walking and riding with these thoughts in his mind, Fallon covered ten miles more.

He was now devoid of any illusions as to the outcome. He simply was not going to make it, and neither was his ­horse. The blazing sun had taken its toll, as had the stifling dust.

He might have tried to seek out shade and wait for the cooler hours, but the posse was somewhere behind him and they would not lack for water.

Fallon remounted, and the black ­horse started gamely on. They would be fortunate to last another three miles.

At that moment he saw the wagons. They ­were no mirage.

Two covered wagons, two teams of six oxen each, two saddle ­horses, a milk cow, and half a dozen people. One wagon was canted sharply over, a condition he diagnosed as a broken wheel. Oxen and ­horses ­were gaunt, the people drawn and tired.

Hastily, in the moment before they sighted him, Fallon beat the dust from his clothing, straightened his tie, pulled his ­horse’s head up, and straightened up himself. He would approach them as a man of means, a man of spirit, a man who could take command. Once people felt pity for a man, he would never be able to have the upper hand. The thing to do was take command and keep them moving.

Macon Fallon was alive to opportunity, and opportunity was what he needed now. Every bit of his cash except for a few dollars had been left behind in Seven Pines. He needed not only a stake before going on, but a chance for his ­horse and himself to recover strength.

And these ­were the people who would provide it. Did not the good Lord send the lambs to be sheared?