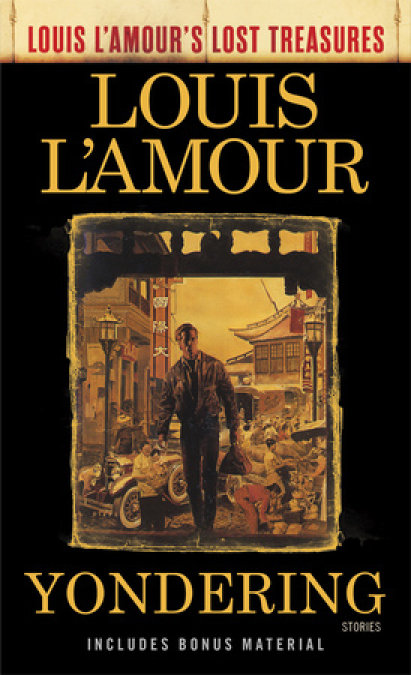 From one of the greatest storytellers of the American West comes a collection of short stories never before released as audio digital downloads!

This audiobook collection includes "Death West Bound," "Old Doc Yak," "It's Your Move," "And Proudly Die," "Survival," "Show Me The Way To Go Home," "Thicker Than Blood," "The Admiral," "Shanghai, Not Without Gestures," "The Man Who Stole Shakespeare," "The Dancing Kate," "Off the Mangrove Coast," "Glorious Glorious," "By the Ruins of El Walarieh," "Where There's Fighting," "The Cross and the Candle," "A Friend of the General," "Author's Tea," "Dead End Drift," and "Let Me Forget." 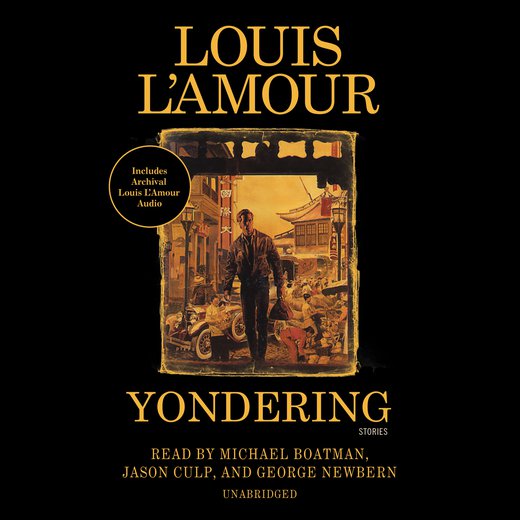 In the passing of time when greater events occupy the attention of the world, some things are forgotten that should be remembered. The following story is just one tiny tribute to many gallant men, both British and Greek, who attempted to stay, if just for a little while, what was at the time an invincible tide.

On about April 6, 1941 Germany invaded Greece as one small fragment of a much larger pattern. Anticipating such a move, Great Britain had landed 57,000 men under Gen. Maitland Wilson. Moving with speed and efficiency, the German armored divisions struck south and between April twelfth and the twentieth German spearheads advanced through the rugged mountain terrain of central Greece.

Papagos, realizing victory was impossible, suggested he try to stay the advance long enough for the British forces to escape intact so they could fight elsewhere. His efforts were so successful that despite a German parachute drop near Corinth, some 43,000 British soldiers were evacuated. Many of these soldiers were with Alexander when he won his victory in North Africa.

The story here is an episode in the German advance through the mountains of central Greece.

THE FOUR MEN were sprawled in a cuplike depression at the top of the pass. From where the machine gun was planted it had a clear field of fire for over four hundred yards. Beyond that the road was visible only at intervals. By a careful watch of those intervals an enemy could be seen long before he was within range.

A low parapet of loose rock had been thrown up along the lip of the depression, leaving an aperture for the .30-caliber gun. Two of the men were also armed with rifles.

It was very still. The slow warmth of the morning sun soaked into their bones and ate the frost away, leaving them lethargic and pleased. The low rumble as of thunder in the far-off hills were the bombs over Serbia, miles away.

“How about some coffee? Is there any left?”

Benton looked at the two who were sleeping in the sun. They were mere boys. “Shall we wake them?”

“Pretty soon. They worry too much. Especially Pommy. He’s afraid of being afraid.”

“Sackworth doesn’t. He thinks we’re bloody heroes. Do you?”

“I’d feel heroic as blazes if I had a shave,” Ryan said. “Funny, how you like being shaved. It sets a man up somehow.”

Pommy turned over and opened his eyes. “I say, Bent? Shall I spell you a bit? You’ve been there hours!”

Benton looked at him, liking his fresh, clean-cut look.

“I could use some coffee. I feel like I was growing to this rock.”

“The young Englishman had risen to his feet.

“There’s something coming down there. A man, I think.”

“Couldn’t be one of our men. We didn’t have any over there. He’s stopped—looking back.”

“He’s coming on again now,” Sackworth said after a moment. He had joined them at the first sign of trouble. “Shall I try a shot?”

The sun climbed higher, and the moving figure came slowly toward them. He seemed to move at an almost creeping pace. At times, out of sight of the pass, they thought he would never show up again.

“He’s carrying something,” Pommy said. “Too heavy for a rifle, but I saw the sun flash on it back there a way.”

The man came into sight around the last bend. He was big, but he walked very slowly, limping a little. He was wearing faded khaki trousers and a torn shirt. Over one shoulder were several belts of ammunition.

“He hasn’t carried that very far,” Ryan said. “He’s got over a hundred pounds there.”

Benton picked up one of the rifles and stepped to the parapet, but before he could lift the gun or speak, the man looked up. Benton thought he had never seen a face so haggard with weariness. It was an utter and complete weariness that seemed to come from within. The man’s face was covered with a stubble of black beard. His face was wide at the cheekbones, and the nose was broken. His head was wrapped in a bloody bandage above which coarse black hair was visible.

“Any room up there?” he asked.

“Who are you?” Benton demanded.

Without replying, the big man started up the steep path. Once he slipped, skinning his knee against a sharp rock. Puzzled, they waited. When he stood beside them, they were shocked at his appearance. His face, under the deep brown of sun and wind, was drawn and pale, his nose peeling from sunburn. The rags of what must have once been a uniform were mud stained and sweat discolored.

“What difference does it make?” he asked mildly, humorously. “I’m here now.”

He lowered the machine gun and slid the belts to the ground. When he straightened, they could see he was a half inch taller than Benton, who was a tall man, and at least thirty pounds heavier. Through his shirt bulging muscles showed, and there was blood clogging the hair on his chest.

“My name’s Horne,” he added. “Mike Horne. I’ve been fighting with Koska’s guerrillas in Albania.”

“Not so far if you know the mountains.” He looked at the pot on the fire. “How’s for some coffee?”

Silently Ryan filled a cup. Digging in his haver-sack, Horne produced some Greek bread and a thick chunk of sausage. He brushed the sand from the sausage gravely. “Want some? I salvaged this from a bombed house back yonder. Might be some shell fragments in it.”

“You pack that gun over the mountains?” Ryan asked.

Horne nodded, his mouth full. “Part of the way. It was surrounded by dead Greeks when I found it. Four Italians found it the same time. We had trouble.”

“Did you—kill them all?” Pommy asked.

Horne looked at him. “No, kid. I asked them to tea an’ then put sand in their bearings.”

Pommy’s face got red; then he grinned.

“They put down four boxes by mistake,” Benton said.

Ryan was interested. “Koska’s guerrillas? I heard of them. Are they as tough as you hear?”

“Tougher. Koska’s an Albanian gypsy. Sneaked into Valona alone a few nights ago an’ got himself three dagos. With a knife.”

Sackworth studied Horne as if he were some kind of insect. “You call that bravery? That’s like animals. One can at least fight like a gentleman!”

Horne winked at Ryan. “Sure, kid. But this ain’t a gentleman’s fight. This is war. Nothing sporting about it, just a case of dog eat dog, an’ you better have big teeth.”

“Why are you here?” Sackworth demanded.

Horne shrugged. “Why am I any place? Think I’m a fifth columnist or something?” He stared regretfully into the empty cup. “Well, I’m not. I ran a gun in the Chaco a few years ago; then they started to fight in China, so I went there. I was in the Spanish scrap with the Loyalists.

“Hung around in England long enough to learn something about that parachute business. Now that’s a man’s job. When you get down in an enemy country, you’re on your own. I was with the bunch that hopped off from Libya and parachuted down in southern Italy to cut off that aqueduct and supply line to the Sicily naval base. Flock of ‘spiggoties’ spotted me, but I got down to the water and hiked out in a fishing boat. Now I’m here.”

He looked up at Benton, wiping the back of his hand across his mouth. “From Kalgoorlie, I bet. You got the look. I prospected out of there once. I worked for pearls out of Darwin, too. I’m an original swag man, friend.”

Horne looked at him, smiling. Two of his front teeth at the side were missing.

“It’s a bum, sonny. Just a bum. A guy who packs a tucker bag around looking for whatever turns up.”

Horne pulled the gun over into his lap, carefully wiping the oil buffer clean. Then he oiled the moving parts of the gun with a little can he took from his hip pocket and slowly assembled it. He handled the gun like a lover, fitting the parts together smoothly and testing it carefully for head space when it was ready for firing.

“That a German shirt you have on?” Sackworth asked. His eyes were level, and he had his rifle across his knees, pointed at Horne.

“Sure,” Horne said mildly. “I needed a shirt, so I took it out of a dead German’s outfit.”

“Looting,” Sackworth said with scorn. There was distaste and dislike in his gaze.

“Why not?” Horne looked up at Sackworth, amused. “You’re a good kid, so don’t start throwing your weight around. This sportsmanship stuff, the old school tie, an’ whatnot—that’s okay where it belongs. You Britishers who play war like a game are living in the past. There’s nothing sporting about this. It’s like waterfronts or jungles. You survive any way you can.”

Sackworth did not move the rifle. “I don’t like him,” he said to Benton. “I don’t trust him.”

“Forget it!” Benton snapped. “The man’s all right, and Lord knows we need fighting men!”

“Sure,” Horne added quietly. “It’s just you an’ me are different kind of animals, kid. You’re probably Eton and then Sandhurst. Me, I came up the hard way. A tough road kid in the States, then an able seaman, took a whirl at the fight game, and wound up in Chaco.

“I like to fight. I also like to live. I been in a lot of fights, and mostly I fought pretty good, an’ I’m still alive. The Jerries use whatever tactics they need. What you need, kid, in war is not a lot of cut an’ dried rules but a good imagination, the ability to use what you’ve got to the best advantage no matter where you are, and a lot of the old moxie.

“You’ll make a good fighter. You got the moxie. All you need is a little kicking around.”

“I wish we knew where the Jerries were,” Ryan said. “This waiting gets me.”

“You’ll see them pretty quick,” Horne said. “There’s about a battalion in the first group, and there’s only one tank.”

Benton lowered his cup, astonished. “You mean you’ve actually seen them? They are coming?”

“Why didn’t you say so?” Sackworth demanded. His face was flushed and angry. “We could have warned the troops behind us.”

“Yeah?” Horne did not look up from wiping the dust from the cartridges. “Well, we couldn’t. You see,” he added, looking up, “they broke through Monastir Pass two days ago. Your men back there know more about it than we do. This is just a supporting column to polish off any leftovers like us.”