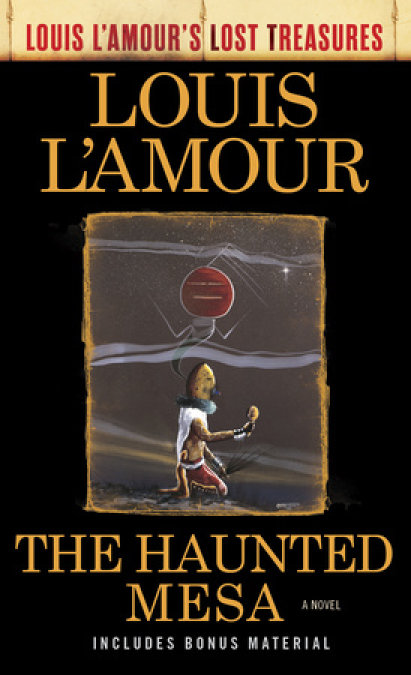 The Navajo called them the Anasazi, the “ancient enemy,” and their abandoned cities haunt the canyons and plateaus of the Southwest. For centuries the sudden disappearance of these people baffled historians. Summoned to a dark desert plateau by a desperate letter from an old friend, renowned investigator Mike Raglan is drawn into a world of mystery, violence, and explosive revelations. Crossing a border beyond the laws of man and nature, he will learn of the astonishing world of the Anasazi and discover the most extraordinary frontier ever encountered.

It was night, and he was alone upon the desert. It had been over an hour since he had seen another car, a Navajo family in a pickup.

He shivered. What was the matter with him? Ever since leaving the highway he had felt a growing uneasiness. Had he not traveled hundreds of lonely roads before this? Or was it that old memory, haunting him still?

Yet why should that be so? It was only a story told by an old man at a lunch counter, and he had heard many such stories and spent a good part of his life proving them to be illusions, fabrications, or misunderstood phenomena. Why had that one story clung to his memory? Was it the old man himself?

He drove slowly, watching for the turnoff he had been warned would be hard to find. The road was a mere trail among low sandhills, with the dark outlines of square-­edged mesas looming against the sky.

Of course, Erik Hokart’s letter was a part of it. That letter had come from a badly frightened man, and no man he had ever known was more cool, concise, and self-­sufficient than Erik Hokart.

There was no sound but that of the car itself, nothing to see but that narrow avenue of light carved by the headlights through a tunnel of darkness.

He leaned forward, peering into the night, trying to see the turnoff in time. On impulse he pulled over and stopped, shutting off the motor and the lights.

He sat very still in the darkness, listening. Listen­ing for what?

With the lights out, the desert was gray tufted with black spots of desert growth. Here and there loomed tall columns, and one rocky mass shaped like a pipe organ.

It was absolutely still. How rarely, he thought, can modern man experience a total silence! Yet the desert had it to offer, as well as the high mountains.

Opening the car door he stepped out into the chill night air, but he did not close the door behind him. The sound would have seemed like an obscenity in this all-­pervading stillness. A step away from the car, he stood listening.

What he hoped to hear was the approaching sound of Erik’s four-­wheel-­drive vehicle. No doubt he was still too far away. Somewhere in the canyon ahead, Erik had suggested.

To the westward lay a long mesa, stark and black against the sky. That would be the one Erik had mentioned in his letter. It was also the one he himself remembered. Almost ten miles long and some two thousand feet high, the last three hundred to five hundred feet sheer rock. Had he ever mentioned to Erik his knowledge of that mesa?

As he turned back to the car, something flared at the corner of his eye. Turning quickly, startled, he stared at the flare on the mesa’s dark rim.

For a space of what must have been thirty seconds it flared, changed color slightly, then vanished.

He stared at the end of the mesa where the light had appeared. A campfire was unlikely at that height, and in that location.

A crashed plane? He had heard no sound of motors, no explosion, seen nothing except that odd flare.

Puzzled and more than a little disturbed, he got back into his car, and a half mile farther he found the turnoff for which he was watching. He turned down a sandy slope and drove along the bottom of a dry wash. From here on, he had been advised, it would be rough going, even for a four-­wheel drive, but he had a shovel in the back of the car and some steel mesh he could unroll ahead if necessary. Many desert roads followed washes but he had never liked them. This was not the season for flash floods and the skies were clear, but flash floods had a way of happening when least expected. Long ago, when only a teenager, he had watched a man lose all he had in just such a flood.

The man had given him a lift, and it was raining hard in the mountains. They had reached a wash and he warned the driver it was not safe. The man had merely smiled tolerantly and started across the wide wash. Unhappily, about two thirds of the way across, they stuck in the sand. Working to free the car they almost missed hearing the roar of the oncoming waters.

A strange coolness touched their faces, and startled, they looked up. A wall of water, no less than eight feet high with great logs riding its crest, was sweeping around a bend of the narrower canyon.

The rush of water struck the canyon wall at the bend, throwing spray fifty feet into the air. For one frozen instant they stared, and then they ran.

The rushing wall of water was a good two hundred yards off, and they were less than thirty yards from the nearest bank. They beat the flood by half a step.

Turning, they looked back at the wash, running bank-­full. He remembered the shocked and empty look on the man’s face.

He had said, “This will run off in half an hour or less, but you’d better forget your car. There will be nothing left but twisted metal with sand all through the engine block.”

“All I had was in that car,” the man replied.

That had been a long time ago but he had saved his battered valise, although it contained only two worn pairs of blue jeans, some shirts, socks, and underwear. In those days he had always carried his razor and his comb in his pocket.

The wash down which he now drove showed evidence of more than one such flood. Brush and debris were piled against rocks and trees, some of it quite recent. In this country you worried when there were clouds over the mountains; in the Kunluns bordering Tibet on the north, you worried when the skies were clear, for on such days in that clear, thin air the hot sun melted the snows high in the mountains, and flash floods roared down the canyons when there was not a cloud in the sky.

Leaning forward, he peered at the mesa rim, but all was dark. The track he followed now split into several and he chose the one most followed. He swung wide around a big old cottonwood, a sure sign of ground water, and drove down the narrow alley of light, then to the crest of a low sandy hill. Getting out, he stood beside the car and listened into the night.

Irritably, he reflected that Erik could at least have met him halfway. He was tired and in no mood to prowl through this lonely country in the night.

“No!” Erik had said. “Not there! Especially not there!”

That was during their last telephone conversation, at least a month ago, when they had first talked of his coming for a visit. Three weeks later had come the letter, hastily scrawled, a desperate plea for help.

He glanced around uneasily, then backed up against the car. It was a lonely, eerie place. . . . No sooner had the thought come than he brushed it aside. Odd, how that old story had stuck in his mind, always lurking in the shadows of his memory, demanding to be recognized yet repeatedly brushed aside.

The trouble was, the story would not be dismissed, and no doubt a good part of his career since then had been influenced by it. Yet when he had first discussed this country with Erik he had not mentioned the story. Erik knew the country only from having flown over it in passing from New York or Chicago to Los Angeles, and he was not the sort of man to listen to such a tale with anything but impatience.

Mike Raglan had been nineteen when he first heard the story, and only two weeks later he had seen No Man’s Mesa for the first time.

He had been employed in the old Katherine Mine near the Colorado River when the decision was made to cease operations for a while. Four of them had been sitting on the station at the 300 level discussing what to do next. They were eating their lunches with small appetite, as they would now be out of work and jobs were scarce. He had commented that he did not know where he would go.

“Why not ride along with me?” Jack had suggested. “I’ve some claims up on the Vallecito and I must do the assessment work. There are mines around Durango and at Silverton and you might find a job.” With nothing better in sight, Mike Raglan agreed.

Jack was a machineman and had been running a stoper on the same shift with him for several months. He was a congenial, easygoing man of sixty or more with memories of the great days at Goldfield, Tonopah, Rands­burg, and Cripple Creek. He had grown up in the Four Corners area and his grandmother had been a Paiute. He spoke the language well.

They had driven to Flagstaff and then to Tuba City. Farther along somewhere they had turned into an old trail for Navajo Mountain.

There were few places Jack hesitated to go with his old car. Its high center enabled it to straddle rocks that would have disabled a later model. He carried a kit of tools, a spare fanbelt, and odds and ends of nuts, bolts, and baling wire, as well as an axe, shovel, and saw. There were always a couple of five-­gallon cans of gasoline, one of water, and a roll of steel mesh used in crossing deep sand. There was literally no place he would not go when traveling or prospecting.