It seemed the perfect place to lie low. The owner of the ranch was an attractive, gray-haired lady who had once been an actress. The other woman was a beautiful, fragile-seeming blonde. They needed repairs done, and he needed to disappear for a while.

The first sign that things were not as they should be was when a Pinkerton man questioned him about a missing woman. Then he accidentally found a will belonging to the previous owner of the ranch. After that, a young lady showed up in town making claims that the place belonged to her.

Worried that his hideout was turning into a battleground, he didn’t know what would be more dangerous, staying or leaving. For a man interested only in passin’ through, he suddenly found himself entangled in a deadly struggle....

In Louis L’Amour’s Lost Treasures: Volume 1 and Volume 2, Beau L’Amour takes the listener on a guided tour through many of the finished and unfinished short stories, novels, and treatments that his father was never able to publish during his lifetime. L’Amour’s never-before-seen first novel, No Traveller Returns, faithfully completed for this program, is a voyage into danger and violence on the high seas.

Additionally, many beloved classics will be rereleased with an exclusive Lost Treasures postscript featuring previously unpublished material, including outlines, plot notes, and alternate drafts. These postscripts tell the story behind the stories that millions have come to know and cherish. 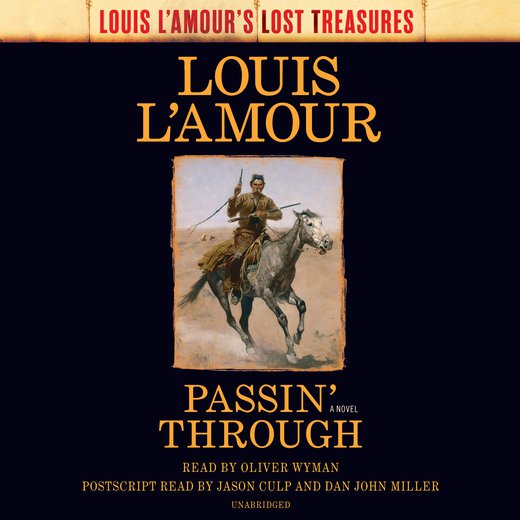 Behind me a noose hung empty and before me the land was wild.

I rode a blue horse to the trail’s divide and tossed a coin to choose my way. The coin fell left and I turned the roan, but doubt rode my shoulders like an evil thing.

The rimrock broke and the trail dipped through the crack, and my horse picked a careful way to the bottom, down the earth and rockslide that lay below the notch. Sweat stung my neck where the rope burns were, for the flesh was torn and raw. At the bottom of the slide I turned left again and the roan moved eagerly forward.

There would be riders behind me now, eager to hang me again, for they were fierce and bitter men with hatred for me, a stranger.

Yet when had I not been a stranger, riding alone?

There had been nothing ahead to look to, and nothing behind I wanted to remember, so I’d headed west into new country simply because it was new country. Wild and reckless and hard I was, and quick with a gun to shoot, with a face honed down by sun, wind, and hardship, and eyes, some said, like chunks of blue ice.

When I came upon them standing beside the trail I was headed for a far-­off town. An Indian woman with an Indian boy, an old man and a horse dead beside them.

They lifted no hand and made no sign, but the look of trouble was harsh upon them. The desert lay wide around them, a desolate land where no water was. Turning my horse, I rode to where they stood, and their lips were parched and cracked. The boy’s eyes went to my canteen but he said nothing.

They stood and looked at me and I took the canteen from its lashings and passed it to the woman. She passed it first to the boy and he took it and drank, then returned it to her.

From the last of my hoarded biscuits I gave them food, then helped to bury the old man, safe from wolves and buzzards.

Then I put them up on my packhorse and carried them to the town, where I gave each a silver dollar. I stabled my horses, stowed my gear in the corner of a dusty, rarely used tack room, and walked to the saloon for a drink. A bad choice in a bad town.

There was a tall man at the bar, a man with a mustache and goatee, his black coat drawn back to reveal a pearl-handled gun. A mean man, a cruel man, a man looking for trouble, and here was I, a stranger.

When I saw his face I knew his kind and went to the far end of the bar. Heat and weariness had shortened my temper so I wanted space about me and no words with anyone until I had eaten and rested.

He stared at me and said, “Afraid of something?”

“Of nothing,” I said, and there was impatience in my tone, for I knew what was coming. There was in me the memory of other such towns and other such men.

“You are not polite,” he said, “and I like people to be polite when they speak to me. Do you know who I am?”

“Leave me alone,” I said. “I shall be gone within the hour.”

The bartender poured my drink and there was a warning in his eyes.

“Do you know who I am?” he persisted.

Tiredness and impatience overruled my judgment. “A damned fool if you persist in this,” I said. “I’m a drifting man who just wants to drift.”

“A ‘damned fool’ he calls me, and he’s wearing a gun, too.” He dropped his hand to his gun and I killed him.

His gun had not cleared leather when my bullet took him at the base of the throat, and there was a moment when his face was wild with disbelief. He had killed before but he had not expected to die. He looked into my eyes with all the manhood gone from his. He sank to his knees and he tried to speak but blood was choking him, and he went face-­down in the sawdust, filling his clutching fists with it.

“You will hang for this,” someone said, “hang until you’re dead!”

“He was asking for it. He put a hand to his gun before I did.”

“It makes no difference. He is a known man and you are not. There’s his brother behind you with a shotgun now.”

So they took me out, his brothers did, and hanged me high from a cottonwood limb. There was no drop to break my neck, for they shoved me off the rump of a blue roan horse and left me strangling there, to die slowly while they went off for a drink.

Then the Indian woman and the boy came from the brush and cut me down. They removed the noose from my neck and stood by while I gagged and choked and coughed. The blue roan horse stood there and on him was a fine saddle with a rifle in the scabbard.

My own horses were a mile away in a livery stable and to get them I’d have to go through town. Taking up the bridle reins, I put a foot in the stirrup, and the Indian woman said, “No! No!”

“He may be bad but he’s the only one I’ve got. My horses and gear are in the stable and I’m not going back there.” Swinging to the saddle, I turned to give them my thanks but they had turned their backs on me and were disappearing into the brush.

The roan moved out eagerly and I let him go. “You’ve a smart way about you, Horse,” I said, “and I like it.”

From the scabbard I shucked the Winchester and checked the magazine . . . fully loaded. My pistols needed no checking, picked from the ground where they had been thrown and handed to me by the Indian boy when they took the noose from my neck.

There was one empty shell and I let it fall to the ground as I thumbed in another cartridge. So small a thing to empty out a man’s life.

The trail branched but the horse went left and I let him go. Left it began and left it could continue, although I regretted the outfit left behind, and the horse as well, although he was no such a horse as this I rode.

Dust devils danced where the hot sun lay, and heat waves shimmered in the distance. Mountains lay west and behind me, blue mountains with a hint of pines upon them, but my horse stepped south and east, tossing his head and eager for the distance. He had style, that horse did, and no doubt his owner would be riding with the posse that would follow.

It was a wide land, an empty land, with a vast distance before the mountains came, mountains that knuckled against the sky like doubled fists. Clouds gathered there, hinting of the late-­afternoon rains that came often to these hills.

Glancing back, I saw no dust. Yet I knew the manner of men they were, and they would be coming to hang me again and this time they would not fail. Escape I must, or fight, and they would be too many for me. Yet I did not run the roan because he was too fine a horse to kill, and the heat was great.

When I looked back along my trail the roan turned from it into the sagebrush. He seemed to know where he was going so I let him have his head. He might know where there was good water and I did not.

The distant mountains toward which I rode were beginning to take shape from the haze and gathering shadows. I looked back again, and saw no dust.

What was wrong? Could it be possible they did not know I had escaped their hanging? Knowing western men and their towns, I’d have bet a shirt they would be on my trail within the hour. Or did they know something I did not and were riding by some other route to head me off? Was I riding into a trap?

How far had I come? Fifteen miles? Twenty? What I needed now was a camp, even if I had no blankets, no food, and no water. The roan needed rest as I did, and moreover, I needed to know where I was going. In the gathering dark all was mystery.

Once when I moved to turn off the dim trail the roan objected and pulled away. “What’s the matter, boy? Do you know something I don’t?”

Suddenly, almost a mile further along, the roan turned from the trail and followed a creek into the hills. “Hope you know what you’re doin’, Horse,” I said, “because I sure don’t.”

He wound around, went along a flat through some cedars, and suddenly dipped down and headed into the darkness where trees clustered against a rock shelf. Behind the trees he stopped.

A moment I sat the saddle listening. There was no sound but the ripple of water and occasionally a stirring of the leaves. Overhead the stars were disappearing behind drifting clouds. In the distance there was a rumble of thunder.

On my left there seemed to be a black opening of some sort. Carefully, I dismounted and, holding the reins, moved toward the wide, dark opening.