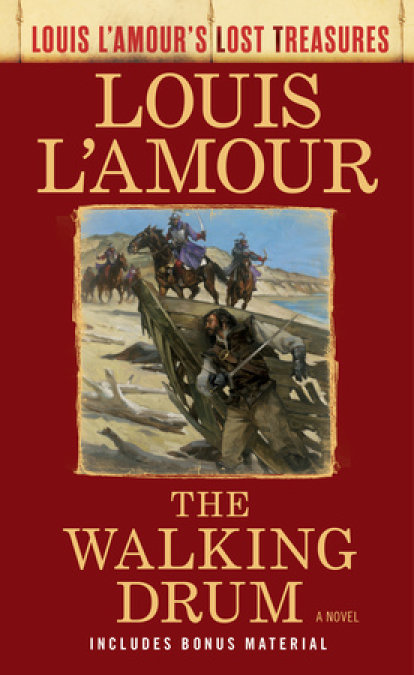 Louis L'Amour has been best known for his ability to capture the spirit and drama of the authentic American West. Now he guides his readers to an even more distant frontier-the enthralling lands of the twelfth century.

Warrior, lover, and scholar, Kerbouchard is a daring seeker of knowledge and fortune bound on a journey of enormous challenge, danger, and revenge. Across Europe, over the Russian steppes, and through the Byzantine wonders of Constantinople, Kerbouchard is thrust into the treacheries, passions, violence, and dazzling wonders of a magnificent time.

From castle to slave galley, from sword-racked battlefields to a princess's secret chamber, and ultimately, to the impregnable fortress of the Valley of Assassins, The Walking Drum is a powerful adventure in an ancient world that you will find every bit as riveting as Louis L'Amour's stories of the American West. 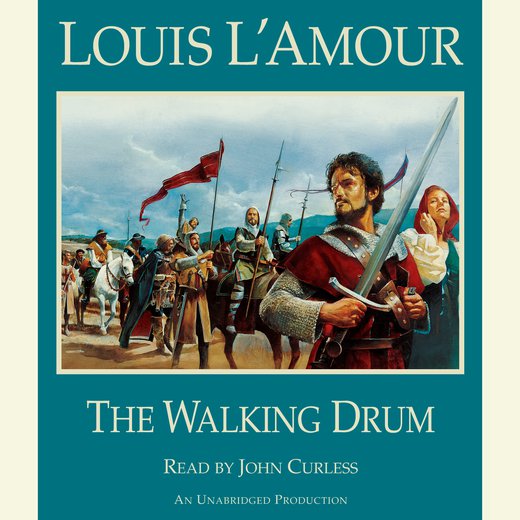 NOTHING MOVED BUT the wind and only a few last, lingering drops of rain, only a blowing of water off the ruined wall. Listening, I heard no other sound. My imagination was creating foes where none existed.

Only hours ago death had visited this place. This heap of charred ruins had been my home, and a night ago I had lain staring into the darkness of the ceiling, dreaming as always of lands beyond the sea.

Now my mother lay in a shallow grave, dug by my own hands, and my home was a ruin where rainwater gathered in the hollows of the ancient stone floor, a floor put down by my ancestors before memory began.

Already dawn was suggesting itself to the sky. Waiting an instant longer, my knife held low in my fist, I told myself, “I will have that gold or kill any who comes between it and me.”

Fire no longer smoldered among the fallen roof beams, for rain had damped it out, leaving the smell of charred wood when it has become wet, and the smell of death.

Darting from the shadows to the well coping, I ran my hand down inside the mouth of the well, counting down the cold stones.

With the point of my fine Damascus dagger, I worked at the mortar. Despite the damp chill, perspiration beaded my brow. At any time the men of Tournemine might return.

The stone loosened. Working it free with my fingers, I lifted it to the well coping. Sheathing my knife, I ran my fingers into the hole, feeling for the box my father had hidden there. They touched wood. Gently, carefully, I drew it from the hole, a small box of strange-smelling wood. Then from behind me, a soft footfall!

“Turning, I saw that a dark figure loomed before me. So large a man could only be Taillefeur, lieutenant to the Baron de Tournemine, a veteran of mercenary wars.

“So!” Taillefeur was pleased. “I was right! The old wolf hid treasure, and the cub has returned for it.”

“It is nothing,” I lied, “some trifles my father left me.”

“Let me have those trifles”—Taillefeur extended his hand—“and you can be on your way. Let Tournemine hunt his own children.”

The night was cold. The wind chilled my body beneath the rain-soaked clothing. Nearby a large drop fell into a puddle with a faint plop.

Among those who stopped at the house of my father over the years had been a lean and savage man with a knife-scarred, pockmarked skin. Grasping my arm with fingers that bit into my flesh like claws, he grinned a lopsided grin and advised, “Trust to your wits, boy, and to your good right hand.”

“He had emptied his glass, leering. “And if you’ve a good left and some gold, that helps, too!”

My left—my left hand rested upon the stone I had removed from the well coping.

Boy I might be, but I was tall and strong as a man, dark as an Arab from the sun, for I was not long from the fishing banks beyond Iceland where I had gone with men from the isle of Brehat.

“If I give you the box,” I said as I gripped the stone tighter, “you will let me go?”

“You are nothing to me. Give me the box.”

He reached a hand to receive it, and I swung the stone.

Too late, Taillefeur threw up his arm to ward off the blow. He saved himself a crushed skull, but the blow felled him in his tracks.

Leaping over his body, I fled to the moors, and for the second time in a few hours the moors were my saving.

What boy does not know the land of his boyhood? Every cave, every dolmen, every dip in the land and hole in the hedges, and all that lonely, rockbound coast for miles.

There I had played and imagined myself in wars, and there I could run, dodge, and elude. As I had run that afternoon to evade the men of Tournemine, so I ran now.

Behind me Taillefeur staggered to his feet. He got up and, groggy from my blow, staggered into the wall. I heard him curse. He must have glimpsed me running, because he gave a great shout and started after me.

“Dodging into a hollow choked with brush, I scrambled through a tunnellike passage known to wolves and boys, and as the storm clouds were scattering like sheep to feed on the meadow of the sky, I came again to the cove.

The ship was there. The crew was ashore filling casks with water, and when they saw me coming, two of them drew swords and a third nocked an arrow to his bowstring, looking beyond to see if I was accompanied.

It was a squat, ill-painted vessel with a slanting mast and a single bank of oars, nothing like the sleek black ships of my father, who was a corsair.

The two who held swords advanced, looking fiercer when they realized I was but a boy, and alone.

“I would speak with your captain,” I said.

They indicated a squat man, running somewhat to fat, in a dirty red cloak. His skin was swarthy, his eyes deep-sunk and furtive. I liked not the look of him and would have withdrawn had not the men of Tournemine been behind me, and searching.

“A boy!” He spoke impatiently.

“Where the wind takes us.” He eyed me with no favor, yet with a measuring quality in his glance.

“To Cyprus, perhaps? Or Sicily?”

“He gave me quick attention, for such places were known to few but wandering merchants or Crusaders. But we upon this coast of Brittany were born to the sea. We were descendants of the Veneti, those Celtic seafaring men who, with their Druid priests, refused tribute to Rome and defied the legions of Julius Caesar.

“What do you know of Cyprus?” he sneered.

“My father may be there. I seek him.”

“It is a far place. What would a father of yours be doing there?”

“My father,” I said proudly, “is Kerbouchard!”

They were astonished, as I expected, for the ships of Kerbouchard harried the coasts; attacking the ships of many nations, trading beyond the farthest seas. My father’s name was legend.

“Your voyage would be useless. By the time you came to Cyprus, he would have sailed.”

“There were lessons I had yet to learn, and one was not to talk too much. “His ship has been sunk, and my father has been killed or sold into slavery. I must find him.”

The captain seemed relieved, for no man wishes to incur the displeasure of Kerbouchard, and he knew what he planned to do. Tall I was, and broader of shoulder than all but two of his crew.

“If the price be not too great, I will pay.”

The men of the crew edged nearer, and I wished for a sword. Yet what choice remained? I must escape with them or face the dogs of Tournemine.

“I could offer a piece of gold,” I suggested.

“You would eat that much!” he said contemptuously, but his hard little eyes sharpened.

“Where would a boy lay his hands upon gold?”

His sudden gesture took me by surprise, and before I could move to resist, I had been seized and thrown to the ground. Despite my struggles, the box was torn from my shirt and broken open. Bright gold spilled upon the sand, and some of the coins rolled, setting off a greedy scramble.

The captain took the gold from their reluctant fingers to be divided among the crew. “Take him aboard,” he commanded. “He has paid his way, but he shall work also or taste the whip.”

“My knife was jerked from its sheath by a moonfaced man with unkempt hair, who belted it. Him I would not forget. Damascus blades were hard to come by, and this was a gift from my father.

“You’ve learned something,” the captain said, maliciously. “Never show your money before strangers. But do your work, and you shall live to see Sicily. I know a Turk there who will pay a pretty price for such a handsome lad.” He grinned at me. “Although you may not long be a lad after he lays hands upon you.”

Bruised and battered I was, but when my foot touched the deck a thrill went along my spine. Yet when taken to my place at the slaves’ bench, and seeing the filth in which I must work, I tried to fight. That men could exist in such evil conditions seemed impossible, although there was little cleanliness in the houses along our coast, other than in my father’s house.

“He had traveled in Moslem lands in Africa and Spain, and brought to our house not only their rich fabrics but their way of living and their love of hot baths.

Shackled to my oar, I looked about me with distaste. How long I could endure this I had no idea, yet a time would come when I would learn how much a man can endure and yet survive. The condition of these galley slaves was abject, and I pitied them, and myself as well. Their backs bore evidence of what happened when their overseer walked along the benches with his whip.