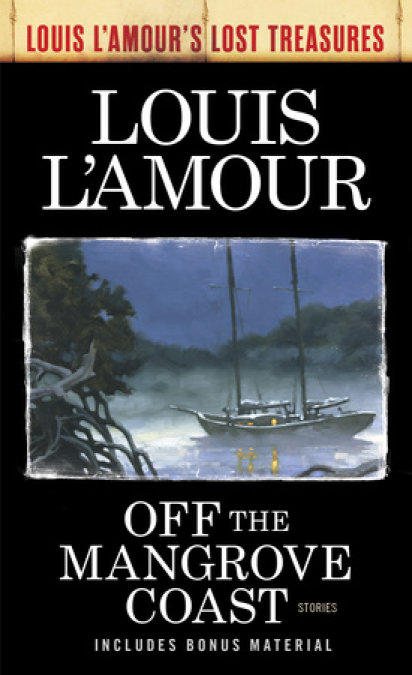 For the first time ever in large print comes this brand new collection from Louis L'Amour, the legendary New York Times bestselling master of the short story.

These unique tales from Louis L'Amour, one of America's greatest treasures, were originally published in magazines of his time. Revered throughout the world for his novels of the frontier experience, L'Amour's critical and popular reputation has soared to new heights as the power and excitement of his short fiction has been revealed in collections like Monument Rock and Beyond the Great Snow Mountains.

Here in Off the Mangrove Coast are fast-moving, historically detailed stories of the travails of extraordinary men and women struggling to break free, to capture fortune and fame, or find love. Here are the characters and the great tales that have made Louis L'Amour one of the world's most popular authors. Here are the works of a master craftsman which will live forever in the reader's imaginations.


From the Hardcover edition. 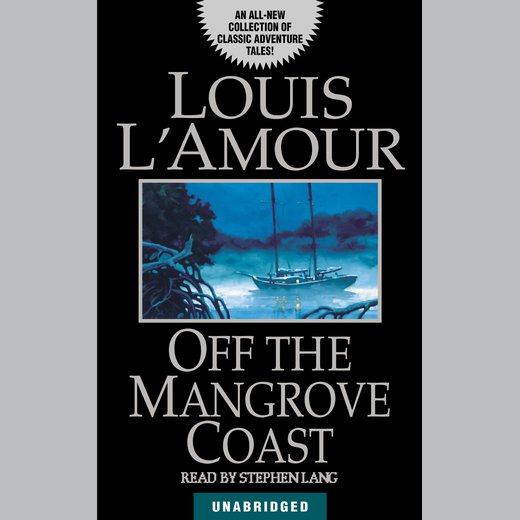 FIGHTERS SHOULD BE HUNGRY

brutal blow in the ribs jerked Tandy Moore from a sound sleep. Gasping, he rolled into a fetal position and looked up to see a brakeman standing over him with his foot drawn back for another kick. With a lunge Tandy was on his feet, his dark eyes blazing. Fists cocked, he started for the brakeman, who backed suddenly away. “Unload!” he said harshly. “Get off! An’ be quick about it!”

Tandy was a big young man with wide shoulders and a sun-darkened face, darkened still further by a stubble of black beard. He chucked with cold humor.

“Nope,” Tandy said grimly, and with relish. “If you want me off, you put me off! Come on, I’m going to like this!”

Instead of a meek and frightened tramp, the brakeman had uncovered a wolf with bared teeth. The brakeman backed away still farther.

“You get off!” he insisted. “If that bull down to the yards finds you here, he’ll report it an’ I’ll get chewed out!”

Tandy Moore relaxed a bit. “You watch yourself, mister! You can lose teeth walkin’ up an’ kickin’ a guy that way!” He grabbed the edge of the gondola and lifted himself to the top, then swung his feet over to the ladder. “Say, Jack? What town is this anyway? Not that it makes much difference.”

“Astoria, Oregon. End of the line.”

“Thanks.” Tandy climbed down the ladder, gauged the speed of the train, and dropped off, hitting the cinders on the run.

As though it had been planned for him, a path slanted down off the grade and into a dense jungle of brush that lined the sides and bottom of a shallow ditch. He slowed and started down the path.

Astoria was almost home, but he wasn’t going home. There was nothing there for him anymore. He trotted along near the foot of a steeply slanting hill. He could smell the sea and the gray sky was spitting a thin mist of rain.

At the bottom of the muddy path lay a mossy gray plank bridging a trickle of water, and beyond it the trail slanted up and finally entered a patch of woods surrounded by a wasteland of logged-off stumps.

Almost as soon as Moore entered the thicket, he smelled the smoke of a campfire. He stopped for a moment, brushing at his baggy, gray tweed trousers with his hand. He wore a wool shirt open at the neck, and a worn leather jacket. His razor, comb, and toothbrush lay in one pocket of the jacket. He had no other possessions. He wore no hat, and his black hair was a coarse mass of unruly curls. As presentable as a hobo could be, he started forward.

Of the four men who sat around the fire, only two commanded his attention. A short, square-shouldered, square-faced man with intelligent eyes reclined on the ground, leaning on an elbow. Nearby a big man with black hair freely sprinkled with gray stood over the fire.

There was something familiar about the big man’s face, but Tandy was sure he had never seen him before. His once-powerful build was apparently now overlaid with a layer of softness, and his eyes were blue and pleasant, almost mild.

The other two were typical of the road, a gray-faced man, old and leathery, and a younger man with dirty skin, white under the grime, and a weak chin and mouth.

“How’s for some coffee?” Tandy asked, his eyes shifting from one to the other.

“Ain’t ready yet, chum. Don’t know that we have enough, anyway.” The white-faced young man looked up at him. “They booted you off that drag, huh?”

Tensing, Tandy turned his head and looked down at the fellow, his eyes turning cold. It was an old song and this was how it always started.

“Tough guy?” The fellow looked away. “Well, some­body’ll take all that out of you.”

Tandy reached down and collared him, jerking him to his tiptoes. They were of the same age, but there the resemblance ceased, for where there was bleak power in Tandy’s hard young face, there was only weakness in the tramp’s.

“It ain’t gonna be you, is it, sucker? You crack wise again and I’ll slap some sense into you!” Tandy said coolly.

“Put him down,” the big man said quietly. “You’ve scared the wits out of him now. No use to hit him.”

Tandy had no intention of hitting him unless he had to, but the remark irritated him more. He dropped the other man and turned.

“Maybe you want to start something?” he demanded aggressively.

The big man only smiled and shook his head. “No, kid, I don’t give a damn what you do. Just don’t make a fool of yourself.”

“Fool, huh?” Tandy could feel them backing him up, cornering him. “You listen to me, you yellow . . . ” He reached for the big man.

A fist smashed into his mouth, and then another crossed to his jaw and he hit the dirt flat on his back.

Tandy Moore lay on the ground for an instant, more amazed at the power of that blow than hurt. The big man stood by the fire, calm and unruffled. Rage overcame Tandy, he came off the ground with a lunge and threw everything he had into a wicked right hand.

It caught only empty air, but a big, hard-­knuckled fist slammed into his chest and stopped his rush, then a right crossed on his jaw and lights exploded in his brain. He went down again but threw himself over and up in one continuous movement. His head buzzing, he spat blood from broken lips and began to circle warily. This big fellow could punch.

Tandy lunged suddenly and swung, but the big man sidestepped smoothly and Tandy fell past him. He cringed, half expecting a blow before he could turn, but none came. He whirled, his fists ready, and the big man stood there calmly, his hands on his hips.

“Who says I can’t!” Tandy lunged and swung, only this time he was thinking and as he swung with his right, he shifted suddenly and brought up a short, wicked left into the big man’s liver.

The fellow’s face went gray, and the square-faced man on the ground sat up suddenly.

Gus backed away hastily, and seeing his advantage, Tandy moved in, more cautious but poised and ready. But he ran into something different, for the big man was moving now, strangely graceful. A left stiffened his mouth, a right smashed him on the chin, and another left dropped him to his knees.

Tandy got to his feet and licked his cut lips. The old guy was fast.

“You can punch, darn you!” he growled. “But this scrap ain’t over. I’ll fight until you drop!”

“Kid,” the man warned, “we’re fightin’ for no good reason. You’re carrying a chip but it’s not for us. If I put you down again, I’ll not let you get up. You know I’m not yellow, and I know you’ve got nerve enough to tackle all of us. What do you say we cut this out?”

Tandy hesitated, backing up. The man on the ground spoke, “Come on, son, have some coffee.”

Tandy dropped his hands with a shrug.

“Mister,” he said with a shamefaced grin, “I shouldn’t have gone off like I did. I asked for it.” He eyed Gus with respect. “You can sure use your dukes, though!”

“Don’t take it hard, kid.” The square-faced man smiled at him. “He used to be a prizefighter.”

Across the fire the white-faced kid kept his mouth shut, not looking at either of them.

Tandy Moore shrugged. “Well he got me, but that fancy stuff ain’t no good in a real scrap! Why, there’s plenty of men in the lumber camps and mines could beat Joe Louis’s head in if they had the chance.”

“Don’t kid yourself,” Gus said quietly. “Fightin’ is like anything else. A professional fighter does his job better than a greenhorn because he knows how.

“That fancy stuff, as you call it, is nothin’ but a lot of things a lot of fighters learned over a thousand years or more. That’s how scientific boxing was born. You were using it when you feinted and hit me with the left.”

Tandy stared at him, then shrugged. “Ahhh, I figure you can either fight or you can’t!”

Gus smiled at Tandy. “How many times have you been licked, kid?”

“Me?” Tandy bristled. “Nobody never licked me!”

“That’s what I figured,” Gus said. “You are big enough, tough enough, and aggressive enough so you could fight every night around hobo jungles like this one and never lose. In the ring, almost any half-baked preliminary boy would cut you to ribbons.

“I was through as a fighter ten years ago. I haven’t trained since but right now I could chop you into pieces and never catch a punch. I was careless, or you wouldn’t have clipped me as you did.”

Tandy scoffed. “Maybe, but if I had a chance at one of those prelim boys you talk about, I’d show you!”

“Gus”—the square-faced man had seated himself on a log—“maybe this is the guy? What do you think?”