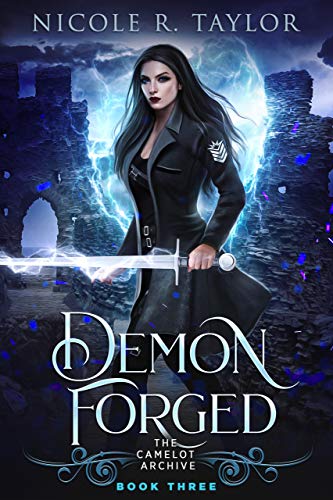 Relics from another world and ancient pacts. It's just another day at Camelot...

Six years ago, the world Madeleine Greenbriar knew almost ended.
As the Naturals come together on a day of remembrance, Arondight delivers a warning that only Madeleine can hear, but it comes too late.
The vault under Camelot explodes, setting free a power that could remake their entire world.
The Natural's only hope for survival lies within Avalon, a realm locked away in space and time. Problem is, no one knows the way...except the Druid Merlin who left for another world eight hundred years ago.
With Elijah's help, Madeleine must travel through a hellish nightmare world to find the Druids...or watch the Earth burn.

Demon Forged is the third novel in The Camelot Archive, an urban fantasy series set in the same alternate Arthurian world seen in The Arondight Codex. Danger, romance, and myth intertwine in this thrilling modern Arthurian adventure!