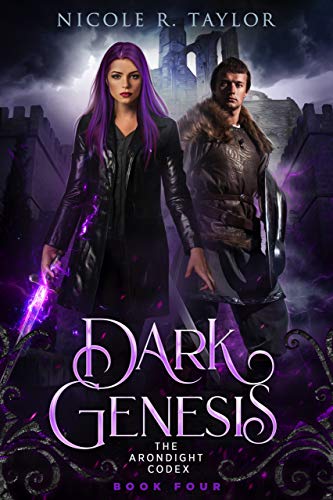 A knight in shining armour. A secret buried in time. Arondight has never been closer to being found...

Scarlett Ravenwood is at a crossroads.
After suffering their biggest betrayal yet, the Naturals are on high alert. There's no telling who is on what side, or if the Light has been infected with the Dark. The end is nigh and Arondight is still out of reach.
Their only hope is a worn out coin given to Scarlett by the last of the Druids, along with a riddle no one can seem to solve. The key, the shard, and the stones.
When Scarlett takes matters into her own hands and touches the Natural's most sacred relic, the Codex, she's shown a vision of Arondight's resting place and does what she does best—take matters into her own hands.
Her recklessness could lead the Naturals to their salvation or their doom. There's no way of telling until she puts the key into the lock and finds out what's on the other side...

Dark Genesis is the fourth novel in The Arondight Codex, an Urban Fantasy series full of adventure, mystery, and romance, woven with the spirit of heroic Arthurian legend.