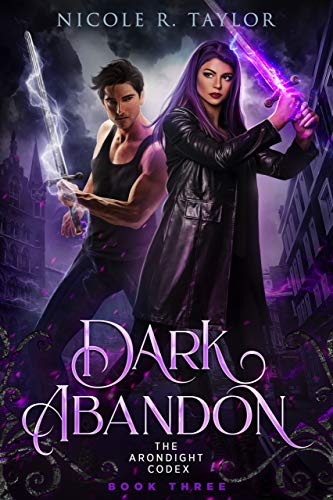 A high school do-over. A plot to take out a whole generation of Naturals. And Scarlett Ravenwood is in the thick of it... again.

Scarlett Ravenwood never though she'd end up in the centre of a supernatural apocalypse, least of all going back to high school.
After tapping into the drop of Arondight she holds inside her, she knows she's in over her head. Unable to control her Light, she's sent to the Academy where the next generation of Naturals are being trained, but something sinister is lurking underneath the surface. The headmaster believes one of the students is possessed... they just don't know who.
Going undercover, it's up to Scarlett and Wilder to root out the cause of the unrest and thwart the Dark's latest attempt at tipping the balance, before a whole generation is wiped out.

With the next generation of Naturals in mortal danger, can Scarlett unravel the mystery surrounding her forgotten past in time to save them from the demon horde?
Find out in Dark Abandon, the third novel in The Arondight Codex, an Urban Fantasy series full of adventure, mystery, and romance, woven with the spirit of heroic Arthurian legend.