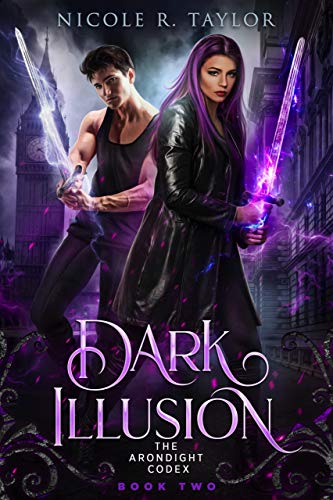 An ancient war with demons. A lost sword with the power to end it all. And a woman with purple hair is the world's only hope.

Scarlett Ravenwood's life changed the day she found out she was a Natural — a demon hunting mage — but what makes her different, also makes her a target.
She's touched by Arondight, the legendary sword destined to end the war between Light and Dark, and that makes her valuable... to both sides.
But when she finds out her best friend Jackson is in danger, a conspiracy with the power to tip the balance to the Dark is revealed and the only person she can trust is Wilder, her Natural mentor. Together, they do the unthinkable — break out a hybrid demon from prison and betray their own kind.
On the run from the Light and the Dark, their only hope is hunting down the greater demon who murdered Scarlett's parents, conspired to turn Jackson into a monster, and killing him... before he can turn humanity into an army of mutated super demons.

Dark Illusion is the second novel in The Arondight Codex, an Urban Fantasy series full of action, adventure, and romance, woven with the threads of lost Arthurian legend.
Betrayed by their own kind and on the run, can Scarlett and Wilder take down a greater demon? Time is running out...