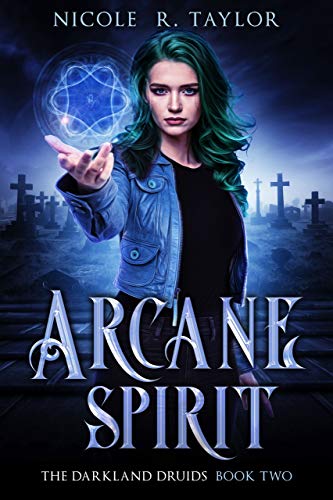 A prophecy of doom. A destiny she cannot escape. When the black sun rises, death will choose the hand of fate.

The real Elspeth Quarrie has awoken, and with her comes a prophecy of extinction.
Her dark Fae power, known as the black sun, will destroy everyone she's come to care about...unless she can rewrite a destiny given to her before she was even born.
But thwarting the threads of fate was never going to be that easy.
Now her spirit has awoken, Elspeth finds herself hunted by the ruthless Chimera — the dark sect of Fae warriors who are desperate to use her powers for evil. She knows its only a matter of time before she's forced to fight. . . and when she does, she risks triggering the prophecy and destroying everyone she cares about.
Elspeth is determined to master her abilities before the Chimera find her. . . but is it already too late?
To find out, Elspeth will have to go to war.
Or risk the black sun rising.

Arcane Spirit is the second book of The Darkland Druids, a mystical Urban Fantasy series set in modern day Scotland.
A lost woman tied to a prophecy of death may be the Druids only chance at finally finding peace in Scotland. . . or the key to giving the forces of evil the power they need to rule over everything. Druids and Fae go head to head in this gripping fantasy saga!