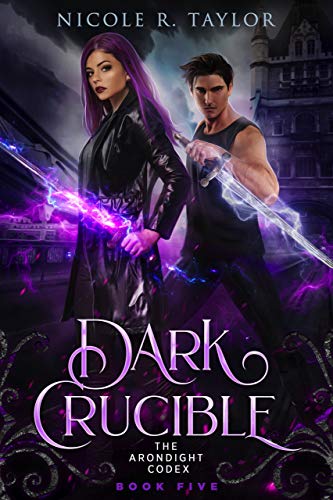 An ancient power. A demon horde from a parallel universe. The world is ending and the only person who can help Scarlett Ravenwood stop it is missing.

Scarlett Ravenwood has done the impossible. She has awoken Arondight, but without a sword she can't prove it. How is a broken thing like her supposed to save the world with love in her heart when no one believes her?
But when the Dark launches a coordinated attack on everything the Light holds dear, the Naturals are forced to face a second cataclysm — and the truth of Arondight's destiny.
It's a race against time to find the rift and close it for good, and the path leads Scarlett back to where it all began — Camelot — and there she must face the consequences of their actions...and her love for Wilder.
As the world begins to burn, can the Naturals survive long enough to put an end to the coming apocalypse?
Or is it already too late?

Dark Crucible is the fifth and final novel in the Arondight Codex, the thrilling Arthurian Urban Fantasy series from Nicole R. Taylor.