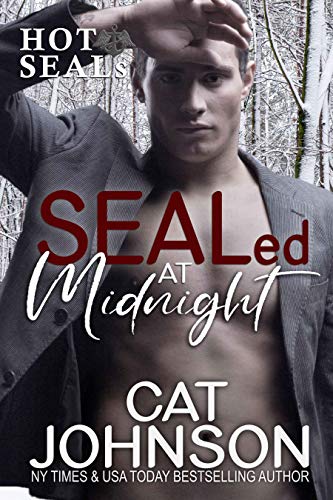 A blizzard. A hot Navy SEAL with amnesia. A woman alone. All the makings for one unforgettable night!
Virginia Starr has the worst luck ever with romance. But maybe her luck is changing because one hell of a hot man just showed up in the middle of the night. One problem—he can't remember anything, including who he is.

The more Ginny sees, the more she realizes, that might not matter all that much. Yes, Virginia, there is a Santa Claus and he brings grown-up girls exactly what they want!

As a combat hardened Navy SEAL, Thom Grande has fought terrorism around the globe, but he can't fight his ex-wife. Or her lawyer. Or the alimony payments. Just when he thinks his life can't get any worse, bad luck smacks him up side the head—literally. Now, he's lost in a snow storm with a traumatic brain injury and he can't even remember his own name. The good news? There's an adorable woman ready, willing and able to keep him warm.

Look for many more titles on Cat's Amazon Author Page!

The hand came out of nowhere, covering her mouth and pulling her back against something big and hard. She screamed but barely any sound came out past the fingers blocking it.

She dropped the flashlight. It fell to the floor of the barn and the beam went out, plunging her into darkness.

It was like a horror movie, but this was very real.

Her heart thundered. She gasped for breath but the steely hand was so large it blocked her nose and her mouth.

He—whoever this was who had captured her—was going to kill her. She knew it. She was going to die, here and now, just like every stupid heroine in every horror movie and it would be her own fault.

All alone, in the middle of a snowstorm with no power, she’d chosen to wander out to the barn, right into the grasp of the killer.

Had she been in the audience for this horror show, she would have been yelling at the too-stupid-to-live heroine on the screen right along with everyone else.

If this was the end, she wasn’t going to die quietly.

Ginny kicked backward, nailing the man in the shin with her boot. Probably not the most effective defense but he had her in an iron grip, pressed up against a body that felt as hard as granite.

“Shh! They’ll hear you.” He spoke low, his mouth pressed close, his voice rough and intense.

It had been so long since she’d had the heat of a man’s words against her ear . . .

Despite the husky voice and hard body, this man was most likely a lunatic who’d throw her in a hole in the ground, fatten her up and then wear her skin like a coat after he murdered her.

“Is anyone else outside?” he asked, just as softly as the first time he spoke.

He moved the hand over her mouth enough that she could answer. “No.”

Shit! She should have said yes. That her big, burly husband the Marine was in the house cleaning his guns and he’d be looking for her any second.

Too stupid to live. Yup, she was living up to the horror movie heroine stereotype perfectly.