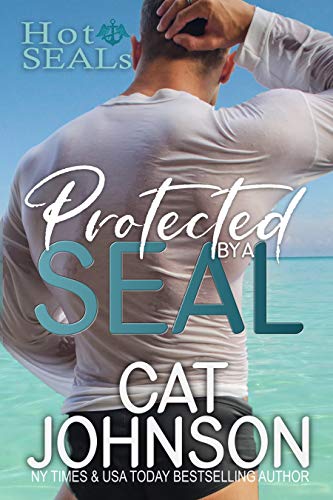 He doesn't know who he hates more—the spoiled actress he's hired to protect or the stalker trying to kill her. But he only wants to take one of them to bed...
As a Navy SEAL, Rick Mann fought his way to hell and back, but he's never faced a challenge quite like protecting Sierra Cox. She's spoiled, she's annoying—and he's never wanted a woman more.

That's a problem for so many reasons. At the top of that list is he needs to keep his head in the game because even though Sierra doesn't take anything seriously, including Rick, the threats on her life are very real.

Horrible scenarios flew through her head as she stood and waited, helpless, for the door to open and reveal who was on the other side and what fate awaited her.

Panicked, she looked for the nearest object she could use to defend herself. The lamp on the desk was glass. That would just break over the stalker’s head and make him madder.

Why was there no pointy, metal letter opener? Then she could stab—

“Hello?” The deep male voice had her heart stopping.

“I have a gun. Don’t come any closer.” She was an actor, and a good one, so the idle threat sounded authentic to her. And dammit, tomorrow she was getting herself a gun for real. She didn’t care what Roger said about it.

Whoever it was must have believed her lie about the gun. The door to the hallway remained partly open, but he didn’t walk through. He stayed shielded safely behind the heavy wood. “Miss Cox. I’m Rick Mann from GAPS.”

What the fuck was GAPS? “I don’t care who you are. Why do you have a key to my room?”

“I met with your manager in the lobby. He gave me a key. Look, if I could just come in—“

“No! Stay where you are. I’m calling Roger.”

“Sierra, I’m right here.” Roger’s voice had her able to breathe again, but she was no less angry and her heart continued to pound.

“Why did you give him a key?” She frowned at her manager as he came through the door, followed by a hulk of a man who dwarfed him in height and size.

“Because he’s going to need one if he’s going to be coming in and out with you for the foreseeable future.” Roger’s calm demeanor about a strange, not to mention large man coming into her suite while she was in the tub made Sierra madder.

“If is the operative word in that statement. I haven’t decided if I’ll be going with his services.” She spat the words as she eyed the man, who had gone from watching the exchange between her and Roger to visually surveying the room.

“I can assure you he’s more than qualified.” As Roger spoke, this Rick person closed the door to the hallway.

“You can decide if I stay or go while the door is secured. There’s someone at least watching you, possibly out to harm you. Let’s not leave the door open for him to do it, okay?”

The hulk was right, of course, but for some reason that only pissed her off. “Fine.”

He moved farther into the room, heading for the windows. Lifting the curtain, he glanced outside, before letting it fall back into place and adjusting it so there was no crack visible between the two panels. He glanced up at the ceiling, squinting at the smoke detector mounted there.

When he pulled a chair over and stood on it to get a closer look at the mechanism, she couldn’t keep quiet any longer. “What are you doing?”

“Checking for surveillance.” He glanced her direction before focusing on dismantling the hotel’s property.

“Holy shit. I never even considered that.” Roger sighed. “See, Sierra. This is why we need him and his company.”

“Be careful. They’ll probably charge me for that if you break it.”

“I won’t break it.” This time he didn’t even look at her when he spoke, which was probably better since there were now wires hanging out of the ceiling.

“If you get electrocuted, it’s not my fault.”

He laughed, surprising her. Then, the device was back where it belonged. Intact and looking none the worse for his tampering. Even the little red light was blinking away as usual.

Rick stepped down off the chair and moved it back to where he’d gotten it. “Finished and without being electrocuted. Sorry to disappoint you.”