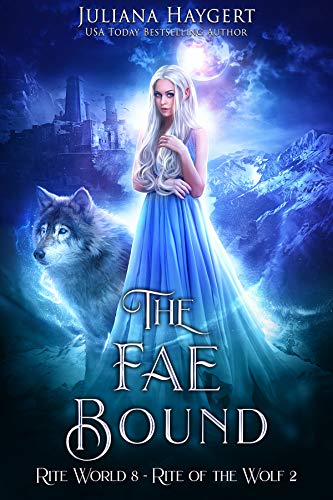 The Fae Bound: Rite of the Wolf

A princess turned reluctant queen. A wolf with nothing left to lose. And an empire that's about to crumble...

Farrah
Despite my best attempts to escape my cruel fate, they were all in vain. I was forced to marry the fae prince in order to save my mate's life— Wyatt, the wolf rogue who's saved me time and time again.
The fae need to be set free. Espionage and betrayal run rampant in the faerie court. The prince thinks he's safe within the walls of his castle.
He's wrong. He forgot about me.

Wyatt
My worst nightmare came true when Farrah became the fae prince's bride. I have to rescue her from his clutches, but first, I need backup.

There are those who are looking to rebel against the fae prince and his armies. If only a contract with a demon and rivalries with witches didn't make things more complicated.
I've just discovered this goes beyond Farrah and I. And when everything goes to hell, who knows what'll be left standing?

Wolves, fae, demons and witches all wage war for power in the next stunning development in Farrah and Wyatt's romance. Don't wait! Continue this breathtaking paranormal new adult series today!