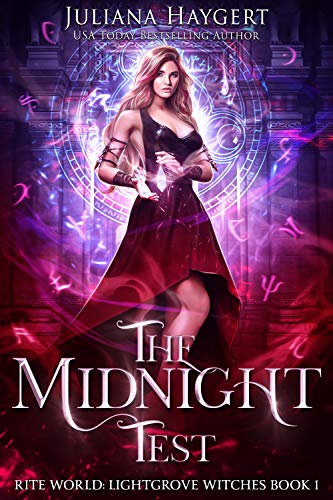 An unprepared witch. A mysterious human. And a quest that will test them both ...

Hazel always knew she was one of the weakest witches of her generation. For a moment there, she even cared about that status.

Not anymore. She's determined to live her life as a normal human—with exception for the occasional ghost hunting. What can she do if the damn spirits won't leave her alone?

But when she finally settles into a new routine, Hazel receives a message that changes everything: the Lightgrove Coven, one of the most powerful witch covens in the world, grants her a rare chance to join them, but only if she passes a dangerous test on Friday the Thirteenth.

At first, Hazel wants to disregard the message. But who is she kidding? This is an opportunity she can't say no to.

Everything is going unexpectedly fine until a human steps in Hazel's way. Sean is mysterious, hot, and inexplicably alluring. Despite Hazel's best attempts to ignore him, she can't. And when Sean's fate entwines with Hazel's task, it puts everything at risk—not just her test, but also their own lives.

The Midnight Test is the first book in the Rite World: Lightgrove Witches series—full of magic, romance, mystery, and excitement! Grab your copy today and start this new adventure!

Author's note: this book was first published in 2014 in the Midnight Kiss anthology. In 2015, it was published for free with a new title, Tested. This 2021 version is reedited and 50% longer!