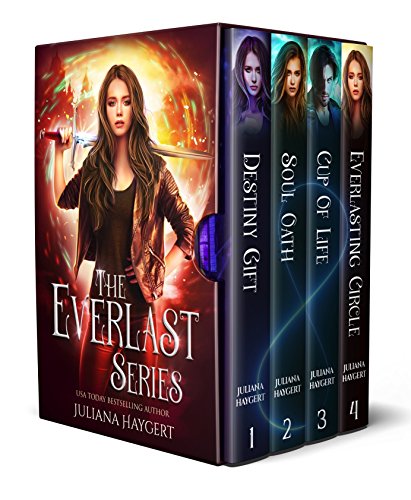 The Everlast: The Complete Series

This box set includes all four books from the USA Today Bestselling Author Juliana Haygert, and is over 1,200 pages of magic, adventure, mythology, and romance.

Her gift will bring light to a world of darkness...

In 2047, the world exists in permanent darkness. Nineteen-year-old Nadine, a student at NYU, works hard to better her family's life in the harsh conditions. When she starts having strange visions of someone named Victor, she tries to ignore the flashes, afraid she might be going insane.

But when she bumps into a very real Victor, her entire world shifts. Her visions taking a turn for the worse, Nadine is bombarded with prophecies of eerie fates, unfamiliar gods, sharp-clawed demons... and instructions. Along with the reluctant Victor, she finds her path entwined with yet another man, Micah, who may be able to shed light on her dark revelations.

Directed down an unbelievable path of magic and mayhem, the three must unravel clues from the visions in order to restore an ancient creed. The chance to bring sunlight to the world again is in Nadine's gift, but only if the evil forces behind the darkness don't manage to stop her first.

If you like Urban Fantasy Romance with Post-Apocalyptic elements, you'll love this action-packed story about destiny, self-discovery, and love. The Everlast Series will entice fans of Lauren Kate, Cassandra Clare, and Kim Harrison, so scroll up to one-click your copy today!

Destiny Gift (Book 1)
Her gift will bring light to a world of darkness...

Soul Oath (Book 2)
Her soul will restore life after death...

Cup of Life (Book 3)
He will live forever, but his existence will mean nothing without her.

Everlasting Circle (Book 4)
Her fight against darkness will only delay death...