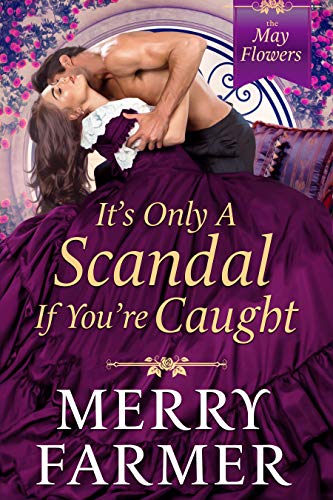 It's Only a Scandal if You're Caught

Lady Bianca Marlowe has a reputation for being beautiful, bold, and bad. She shocks the delicate matrons of London society at balls and tea parties with her outspoken opinions and turns the head of every red-blooded male in London with her daring fashion choices and flirtatious ways. When she is admitted into the prestigious May Flowers ladies' political society, it seems as though no one will be safe from her audacity. There is only one man who can tame her wild ways.

Jack Craig's climb up from his birth in a brothel in Seven Dials to become a Chief Inspector at Scotland Yard was a long and arduous one, but after a series of high-profile arrests, his reputation as one of London's most powerful law enforcement officers is firmly established. His advancement within the Metropolitan Police, and even a knighthood, seem inevitable. Jack has just one weakness—his passion for Lady Bianca.

Their attachment is as unsuitable as it is fiery, and neither are willing to listen to reason and stay away from each other. Especially once Bianca helps Jack uncover a plot to attack the Houses of Parliament that would make Guy Fawkes look like an amateur. But when the inevitable results of their affair turn them both into social outcasts and pit them against each other, they must either discover the true love that has burned beneath their passion or risk an explosion that could put more than their own lives at risk.

A LADY'S FIRST SCANDAL
IT'S ONLY A SCANDAL IF YOU'RE CAUGHT
THE SCANDAL OF A PERFECT KISS
THE EARL'S SCANDALOUS BARGAIN
WHEN LADY INNOCENCE MET DR. SCANDALOUS
THE ROAD TO SCANDAL IS PAVED WITH WICKED INTENTIONS
SCANDAL MEETS ITS MATCH
‘TWAS THE NIGHT BEFORE SCANDAL
HOW TO AVOID A SCANDAL (OR NOT)