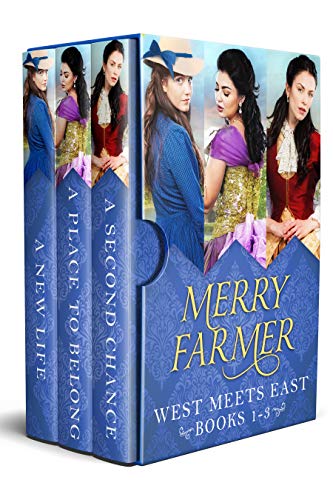 Together in one box set for the first time, three stories of American women from the Historical Western Frontier making new lives for themselves in Victorian England...

Millie Horner considers herself the luckiest woman in the world. Saved from a life of prostitution in the Old West, she is determined to make a new life for herself across the ocean in Cornwall, England. But life below-stairs at Starcross Castle is filled with its own problems, specifically, the problem of making sure that none of her new friends discover the life she came from.

That challenge becomes even harder when she falls for handsome and ambitious footman, Owen Llewellyn.

Owen has his sights set on winning a job as foreman of one of the mines on the property owned by Starcross Castle's lord, Peter deVere, the Earl of Dunsford. Those plans take on a new urgency as love blooms between him and Millie. But Lord Dunsford's wicked nephew, Lord William is determined to undermine Owen and bend Millie to his own lascivious designs.

Can the power of love overcome all obstacles, or will Millie's past stop her from living a new life?

A PLACE TO BELONG

Clara Partridge has never fit anywhere. Literally. At over six feet tall, she has always considered herself awkward and out of place. But now that she has a chance to break away from the terrible life she's been living in the American Old West and to start anew in tranquil Wiltshire, England, she is willing to do whatever it takes to fit in. Even though the last job she's suited for is that of maid in a wealthy gentleman's house.

But when she meets Rev. Arthur Fallon, all of her efforts to be someone she's not seem to be paying off.

Arthur knows he's not the best vicar, but he tries to be the best man he can be. Even when the Amazonian Clara captures his heart with one awkward outburst in church. Even when he learns the truth of who she used to be. And even when Clara comes to his rescue to help him care for the baby of a fallen woman. Clara and Arthur know they are the last two people who should be together, but their hearts say otherwise.

But when word of the baby's parentage leaks out, Clara finds herself scrambling not just to fit in, but to find a place for the baby—and for Arthur—and for her—to belong.

Noelle Walters can hardly believe how lucky she is to be given a chance to start over after a hard life as a soiled dove in the American West. But almost from the moment she steps off the ship in London, England, everything goes wrong. The Lord of the manor where she was supposed to take up a position as a maid has disappeared under scandalous circumstances, and Noelle's services are no longer required. Alone in a foreign country, penniless, and ignorant of the ways of British society, Noelle fears that her only chance of survival will be taking up her old profession again.

Ram Singh hasn't been able to forget the beautiful American woman he escorted from his employer's ship to her new job. When he discovers that Noelle has met with nothing but misfortune, he feels compelled to help her in every way he can. Including sneaking her into his lodgings to save her from the street. But helping Noelle puts Ram's plans for the future in jeopardy when they are discovered together. They must face the choice to survive any way they can on their own or hope for a second chance to fall in love.