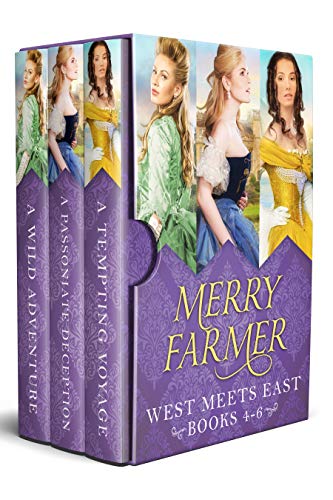 Together in one box set for the first time, three stories of American women from the Historical Western Frontier making new lives for themselves in Victorian England...

After years of reluctantly living the wild life in Haskell, Wyoming, all Rose Rawlins wants is to settle down into a quiet position as a maid for the Bond family in Brynthwaite, England. She takes her position as nurse for charming and irascible Mr. Bond, and confidant of adventurous Miss Elaine Bond, seriously, vowing that nothing will get in the way of her duty to her new friends.

Until handsome and tempting Dr. Isaac Newsome comes along.

Widower Isaac Newsome doesn't feel as though he has anything to offer a woman, but from the first moment he lays eyes on Rose, that belief is challenged. Rose's refreshing, American ways breathe new life into what was becoming a stale existence. But in spite of the fiery attraction between them, Rose is holding something back.

It takes a trio of mischievous young men from Brynthwaite Municipal Orphanage, all of Mr. Bond's wiles, a mysterious and regal bookseller, who is also new to town, and a daring boat race to bring Rose and Isaac together, but even then, will a sudden tragedy pull them apart?

Ellie Braun is on her way from the Old West to England to start a new life as lady's maid to American heiress Helena Mortimer. But when Helena runs off with one of the porters from the ship as soon as they dock in London, it's up to Ellie to smooth things over with Lord Henry Howsden, Helena's fiancé. But instead of being disappointed, Lord Henry concocts a plan for Ellie to impersonate Helena in order to fool his family. A former soiled dove pretending to be a wealthy heiress in the household of a marquis? What could go wrong?

Henry Howsden has resented his father's attempts to sell him in marriage to a woman he's never seen from day one. By introducing Ellie to his family as Miss Mortimer, letting them fall in love with her, then revealing her true identity, he intends to prove to them that common people have worth, and that marriage is not a game. But almost from the start, he falls in love with the beautiful, clever, and free-spirited Ellie. She is everything that he has never been permitted to be, and all too soon he can't imagine a life without her.

But the gulf between an ex-prostitute and a British nobleman is an enormous one, and the passion that develops between Ellie and Henry may prove to be as impossible as it is undeniable.

Captain Albert Tennant has lived most of his life on the sea, in spite of his noble status. It is his home and his passion. But the adventure of transporting several of the young women from Haskell, Wyoming to their new lives in England has highlighted how dull his own life has become. Until Domenica Ortega steps aboard his ship.

Domenica is more than ready to give up her life as a soiled dove for the promise of a fresh start that London provides. But beneath her brash, devil-may-care attitude lurks a secret fear that she hides from the world. It shakes her to her core that handsome Captain Tennant can see right through her mask to the heart she tries to keep hidden. And unlike any other man, Albert makes her feel safe.

When a member of Albert's crew goes missing halfway across the ocean, Domenica and Albert must discover what happened with very little evidence to go on. They have until the ship reaches London to uncover the perpetrator and bring them to justice. But mysteries are difficult to solve when temptation abounds, and the biggest question of all may be how Albert will be able to let Domenica go at the end of their voyage.