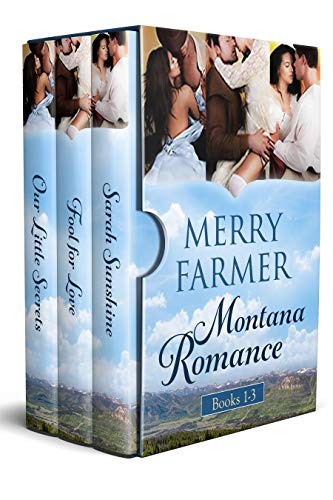 Together in one box set for the first time! Fall in love with these exciting and heartfelt Historical Western tales of a mail-order bride, a fake marriage, and friends to lovers!

She thought she could escape to the West and start a new life...

People are hunting Charlotte Baldwin, missing heiress--but no one is looking for Charlie West, bride of humble frontier shopkeeper Michael West. Marrying him was the cover Charlotte needed to keep her secrets hidden.

But what starts as a marriage of convenience turns hot in a hurry.

He believed the sins of his past were behind him...

The final piece of Michael West's plan to become a proper businessman is a respectable wife. Charlie is beautiful, intelligent, and surprisingly sensual. They're a perfect match in every way.

As passions flare, the truth comes out--and Charlie realizes she may have run straight into the arms of her enemy.

No sin stays a secret forever...

Amelia Elphick's life is over. She may have been born a lady, but when she finds herself jilted by a lover who leaves her pregnant and refuses to marry her, she seems destined for a life on the streets. When her employer's rough but handsome houseguest, Eric, offers to rescue her from ruin, she has no choice but to say yes, even if it means moving halfway around the world.

But Amelia finds herself saying yes to more than a ticket west. What starts with a harmless lie tangles Amelia and Eric in a web of desire and deceit that exposes passions and turns their worlds upside-down. Eric believes Amelia holds the key to saving his beloved ranch and giving him the family he always wanted, but can he save her from the demons of her past without losing himself in the process?

She was done with her shameful past...

But Sarah Withers's past isn't done with her. Though she longs for Roy LaCroix—body, heart, and soul—old wounds and fresh battles threaten to end her second chance at an honest life before it begins.

His future is only a heartbeat away...

But how can Roy LaCroix stay true to the woman he's waited so long for when he and Sarah are embroiled in a twenty-year-old feud that threatens to keep the star-crossed lovers apart? Roy must choose: be a man of substance, or to stay true to his heart.

Only love can stop history from repeating itself before it's too late...